Australia hockey captain Jamie Dwyer is looking forward to playing in the Hero Honda FIH World Cup to be held in New Delhi's Major Dhyan Chand National Stadium from February 28 to March 13 next year and reckons defending champions Germany as the team to be most feared. 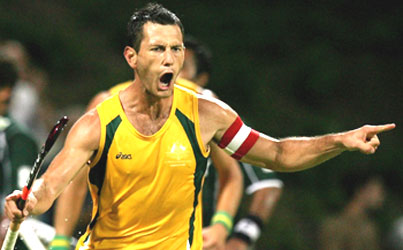 "India is a great place to play hockey and I have had great experiences there in the past. I can't wait for the World Cup to begin," Dwyer was quoted as saying in the latest edition of the tournament's newsletter.

The nippy 30-year-old forward, who played a key role in his country's maiden Olympic triumph at Athens five years ago, is eager to clinch a gold medal in the event after having missed out on the honour twice, very narrowly.

"The World Cup is the only tournament I have not won, so it is very important for me and the team. It was great to play in the last two World Cup finals but we are hoping to bring home the gold this time," said this year's FIH player of the year.

Australia lost to hosts Germany in the final of the 2006 edition held at Monchengladbach with Dwyer forced to sit out of the summit clash following a hamstring injury sustained in his side's semi-final victory against South Korea.

Dwyer has an impressive array of medals to display, having been part of the Australian team that had won Olympic gold and bronze, two World Cup silvers, two Champions Trophy medals  gold and silver.

Asked about who he feels would pose a stiff challenge to the Aussies during next year's mega-event, Dwyer said, "I would have to say Germany, especially after losing to them (in) the last two World Cups."

The Queenslander, who chose hockey over cricket, expects a pleasant weather in the national capital at the time of the tournament, which would enable the players to dish out fast-paced, entertaining hockey.

"I'm hoping the temperature will be in the mid 20s and I'm really hoping the game will be fast -paced and entertaining," he said, hoping that a fair sprinkling of Australian supporters would fly to India to cheer his team.

Australia are grouped in Pool B with India, Spain, England, Pakistan and South Africa while Pool A comprises defending champions Germany, the Netherlands, South Korea, New Zealand, Canada and Argentina.