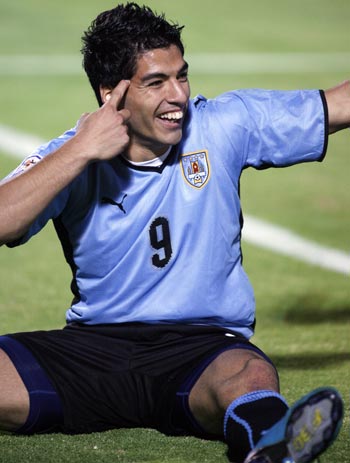 Suarez, who helped Uruguay qualify for next year's World Cup in South Africa, scored twice in the first half and added four more after the break as Ajax ran riot to reach the last eight.

The result was a Dutch Cup record for Ajax, whose previous best was a 10-0 win over Rapiditas Weesp in 1961. NAC Breda hold the overall record with an 18-1 win over Dongen in the 1950s.

Suarez will be unable to repeat his heroics when Martin Jol's side take on NEC Nijmegen in the quarter-finals after picking up his second yellow card in the competition.

The Uruguayan, top scorer in the Dutch league with 18 goals in 17 matches, was joined on the scoresheet by Marko Pantelic and Ismail Aissati who also grabbed first-half doubles.

Kennedy Bakircioglu scored a brace in the second period of the match against Wezep, who play in the third tier of Dutch soccer and hosted the game at second division Zwolle's ground.

Luuk de Jong opened the scoring in the first half and added his second in added time after Bryan Ruiz had doubled the lead with 10 minutes remaining.

Steve McLaren's side must now visit Sparta Rotterdam, who were 5-0 winners at amateurs Baronie Breda on Tuesday.

Nijmegen, second from bottom of the league, reached the last eight with a 2-0 win at fellow strugglers Groningen.

The match between Cup holders Heerenveen and PSV Eindhoven at the Abe Lenstra stadium was postponed due to bad weather.

The winners will host Feyenoord, who beat league champions AZ Alkmaar 1-0 in the fourth round on Tuesday.

Second division Go Ahead Eagles Deventer caused an upset on Monday with a 2-0 win at Heracles Almelo, who are fifth in the top flight, and will now visit NAC Breda in the last eight.

© Copyright 2020 Reuters Limited. All rights reserved. Republication or redistribution of Reuters content, including by framing or similar means, is expressly prohibited without the prior written consent of Reuters. Reuters shall not be liable for any errors or delays in the content, or for any actions taken in reliance thereon.
Related News: Luis Suarez, NAC Breda, Ajax Amsterdam, NEC Nijmegen, WHC Wezep
SHARE THIS STORYCOMMENT
Print this article