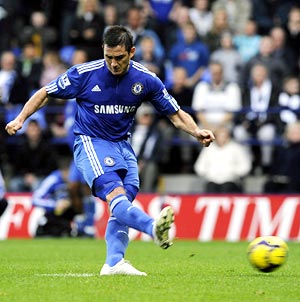 Frank Lampard converted three penalties but only one counted as his Chelsea side pulled four points clear at the top of the English Premier League with a 1-1 draw at West Ham United on Sunday.

The England midfielder, back at his old Upton Park stomping ground, kept cool after referee Mike Dean ordered two retakes of his penalty early in the second half because players from both sides encroached into the area.

Lampard's goal gave Chelsea 41 points from 18 games, four ahead of champions Manchester United who are second after losing 3-0 at Fulham on Saturday. West Ham stayed second from bottom, a point ahead of Portsmouth.

Chelsea, though, gave another lacklustre display and have collected five points from a possible 12 in the league this month.

United have also been inconsistent, suffering two defeats in their last three games.

Elsewhere on Sunday, Wolverhampton Wanderers moved up to 12th spot by beating 14th-placed Burnley 2-0 and Everton drew 1-1 at home to Birmingham City.

The result took Birmingham up to seventh on 28 points while Everton lie 15th.

After Chelsea were awarded a fortunate spot kick when a 61st-minute challenge by Matthew Upson on substitute Daniel Sturridge was deemed a foul, former West Ham player Lampard showed nerves of steel to convert his thrice-taken penalty.

"I didn't need that at all, especially after missing one a few weeks ago (in the 2-1 defeat at Manchester City)," Lampard told Sky Sports.

"I wish he'd have made me retake the Man City one," joked the smiling midfielder.

Chelsea were sluggish for long periods and fell behind on the stroke of halftime to Italian Alessandro Diamanti's penalty after England defender Ashley Cole fouled Jack Collison.

West Ham worked hard and thoroughly deserved a share of the spoils at the end of the London derby.

Wolves manager Mick McCarthy made nine changes to the controversial line-up that lost 3-0 at Manchester United on Tuesday and was rewarded with goals from Nenad Milijas and Kevin Doyle against Burnley.

McCarthy had been widely criticised for resting players in midweek, making 10 changes at United to the team that beat Tottenham Hotspur the previous Saturday.

The Premier League has also asked for an explanation for his actions.

"I have to say there have been one or two dubious characters who have been giving me a bit of stick," said McCarthy. "They have questioned my honesty and integrity when I think I stand up for those things.

"I've never cheated in my life so that does bother me. I'm not looking for vindication by it, I'm looking for points."

At Goodison Park, Everton took an early lead against Birmingham when Diniyar Bilyaletdinov gathered a Louis Saha flick on five minutes and slammed the ball into the net.

However, Birmingham stretched their unbeaten league run to nine matches when Sebastian Larsson finished off a slick passing move in the 22nd minute.

© Copyright 2021 Reuters Limited. All rights reserved. Republication or redistribution of Reuters content, including by framing or similar means, is expressly prohibited without the prior written consent of Reuters. Reuters shall not be liable for any errors or delays in the content, or for any actions taken in reliance thereon.
Related News: CHELSEA Chelsea, Frank Lampard, Mick McCarthy, West Ham United, Everton
COMMENT
Print this article