Ronaldinho named Player of the Decade 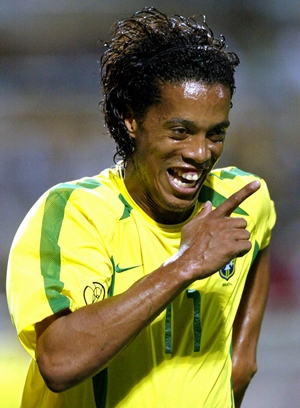 Ronaldinho won the accolade based on the votes cast by readers in the 10 annual votes between 2000 and 2009 being converted into points.

The Brazilian, who was the magazine's World Player of the Year in 2004 and 2005, finished ahead of Messi and Cristiano Ronaldo of Portugal and Real Madrid.

Barcelona, the European club champions, won the Team of the Year award.

Messi, winner of the 2009 Ballon D'Or award, is the first Argentine to win World Soccer's World Player award since Diego Maradona in 1986 and he led a clean sweep of Barcelona players in the player awards, ahead of team mates Andres Iniesta and Xavi.

After just one season in charge of Barcelona, Pep Guardiola was voted Manager of the Year, a clear winner ahead of former Wolfsburg coach Felix Magath and Manchester United's Alex Ferguson.

© Copyright 2022 Reuters Limited. All rights reserved. Republication or redistribution of Reuters content, including by framing or similar means, is expressly prohibited without the prior written consent of Reuters. Reuters shall not be liable for any errors or delays in the content, or for any actions taken in reliance thereon.
Related News: Ronaldinho, Lionel Messi, Barcelona, World Soccer, Cristiano Ronaldo
COMMENT
Print this article