Defender Marco Cassetti slammed in 11 minutes from time to give AS Roma a 1-0 win over Lazio on Sunday in a derby held up by fans throwing firecrackers.

Safety fears prompted a six-minute suspension after a quarter of an hour but the crowd, who have caused trouble at Rome derbies in the past, behaved when play restarted. 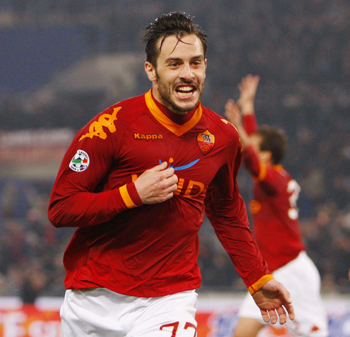 The stoppage took the sting out of the contest but lowly Lazio almost snatched the lead when Mauro Zarate struck the post before Cassetti swept in Mirko Vucinic's cross.

Roma's David Pizarro was dismissed for two bookings late on while there was a customary scuffle between players at the end.

In-form Roma are now just a point off the Champions League places after a bad start while Lazio coach Davide Ballardini, who continually overlooks Goran Pandev after their top striker asked for a close-season move, is clinging to his job.

French forward Jonathan Biabiany earlier scored his first two Serie A goals to put Parma clear in fourth place after a 2-2 draw at Genoa, where club presidents Enrico Preziosi and Tommaso Ghirardi were involved in a heated post-match argument.

Promoted Parma are flourishing back in the top flight and lie a point ahead of Genoa, Sampdoria, Roma and Fiorentina, who beat Atalanta 2-0 thanks to Juan Vargas and Alberto Gilardino.

Biabiany, on loan from Inter Milan, kept his cool to equalise Rodrigo Palacio's opener and then put the visitors ahead before in-form Raffaele Palladino rifled in the leveller.

Twice UEFA Cup winners Parma had fallen on hard times after money problems but are back with a vengeance this term after some shrewd signings in the close season.

Genoa, denied a winner after a disputed offside call, were a surprise fifth last term and are again thriving after 15 games despite selling Diego Milito and Thiago Motta to Inter.

Fiorentina, who took the final Champions League slot last season and are already into the last 16 of Europe's premier competition, still look favourites with Roma to finish fourth.

Cagliari were threatening to go fourth when they led 1-0 at Palermo at halftime in their Sicilian-Sardinian battle but the hosts stormed back under new coach Delio Rossi to win 2-1.

Ninth-placed Napoli also mounted a comeback in their 3-2 home victory over Bari with Fabio Quagliarella netting a brace.

© Copyright 2022 Reuters Limited. All rights reserved. Republication or redistribution of Reuters content, including by framing or similar means, is expressly prohibited without the prior written consent of Reuters. Reuters shall not be liable for any errors or delays in the content, or for any actions taken in reliance thereon.
Related News: AS Roma, Lazio, Genoa, Parma, Marco Cassetti
COMMENT
Print this article