Inter Milan's game at faltering Juventus on Saturday could be stopped if home fans again racially abuse visiting striker Mario Balotelli although the 19-year-old is unlikely to start for the Serie A leaders.

Juve were forced to play a game behind closed doors after fans chanted "a black Italian does not exist" at Palermo-born Balotelli in the corresponding fixture last season.

Similar songs have been heard from Juve supporters in the run-up to the game and Italian soccer federation chief Giancarlo Abete has said the referee and the police will be able to suspend the game for 10 minutes if racist chants occur.

Inter captain Javier Zanetti will not tolerate any abuse.

"I will not hesitate to go to the referee and ask for the match to be stopped," the Argentine told reporters. 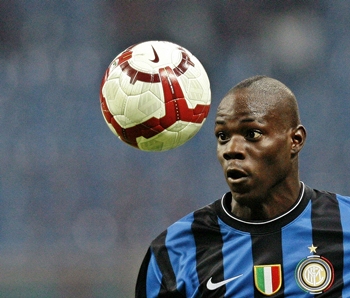 "Mario is calm, he knows there is no defence against stupidity, he can do nothing about it."

Some of the sting may be taken out of the game if Balotelli, linked in the media with a move to Arsenal, is omitted from Inter's squad like he was for Sunday's 1-0 win over Fiorentina.

Juve fans argue most of their chants against the forward are because of his confrontational attitude rather than his colour, with Inter coach Jose Mourinho often criticising Balotelli for acting like a prima donna despite having achieved little.

However, an injury to Ricardo Quaresma, who made a rare start and impressed against Fiorentina, makes it more likely Balotelli will at least be named on the bench in Turin.

Playmaker Wesley Sneijder, key to Mourinho's 4-3-1-2 formation, is struggling to shake off a thigh problem in time.

Champions Inter have barely missed Zlatan Ibrahimovic since his departure to Barcelona earlier this year but Juventus have lacked width and urgency after winger Pavel Nedved's retirement in May.

Club president Jean Claude Blanc has given rookie coach Ciro Ferrara his backing despite constant changes to the formation.

He has not been helped by injuries, with Vincenzo Iaquinta out and fellow strikers Alessandro Del Piero and David Trezeguet short of fitness, while defender Giorgio Chiellini will wear a mask at the Stadio Olimpico to protect a broken nose.

AC Milan, in second, host Sampdoria earlier on Saturday hoping for a fifth straight league win and then a Juve victory.

While the Juventus-Inter game is known as the derby of Italy, with Inter's rivalry with Juve matching if not surpassing that of Milan, another big grudge match takes place on Sunday.

Mid-table AS Roma face Lazio looking to build on their pickup in form while their city rivals are a point above the drop zone as the decision to banish striker Goran Pandev for asking for a move continues to haunt them.

© Copyright 2022 Reuters Limited. All rights reserved. Republication or redistribution of Reuters content, including by framing or similar means, is expressly prohibited without the prior written consent of Reuters. Reuters shall not be liable for any errors or delays in the content, or for any actions taken in reliance thereon.
Related News: Mario Balotelli, Inter Milan, Juve, Jose Mourinho, Alessandro Del Piero
COMMENT
Print this article