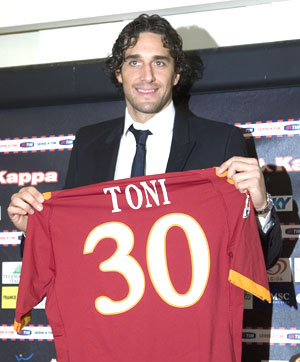 Striker Luca Toni will start for new club AS Roma at Cagliari on Wednesday, when Serie A returns from its mid-season break.

The striker has signed on loan for the rest of the season having been frozen out at Bayern Munich and goes straight into the in-form side, joint fourth after going seven games unbeaten.

"I've found him to be fitter than I expected. He will play at Cagliari. With him, it's a different Roma," coach Claudio Ranieri said.

Cagliari, who have taken Juventus defender Lorenzo Ariaudo on loan, will have to cope with a Toni desperate to shine and force his way back into the Italy squad for the World Cup.

Another fresh arrival in Serie A with June's tournament in South Africa on his mind is David Beckham.

The England midfielder has begun his second loan spell at AC Milan from Los Angeles Galaxy in a bid to secure his World Cup place, but he does not expect to start at home to Genoa.

"Of course I scored against Genoa (last season) and I would love a repeat. I remember that goal with great emotion. However, I am here to be helpful to the team, even five minutes' playing time is fine," said the 34-year-old, whose team lie second.

Leaders and champions Inter Milan also hope to recruit a new-yet-old face for their trip to Chievo.

Forward Goran Pandev, signed as a youngster by Inter almost a decade ago before making his way to Lazio, is a free agent after leaving the Rome club following a contract dispute.

The Macedonian has said he is desperate to sign before Wednesday with Inter short of forwards given Samuel Eto'o is with Cameroon at the African Nations Cup, David Suazo has been loaned to Genoa and reserve Marko Arnautovic has not impressed.

Coach Jose Mourinho, who will still have Diego Milito upfront, is likely to include the little-used Patrick Vieira in midfield with Dejan Stankovic and Thiago Motta suspended.

Inter are eight points above Milan, who lost to Palermo last time but have a game in hand, and nine ahead of the severely faltering Juventus in third.

Reports are rife that Russia coach Guus Hiddink could replace rookie Ciro Ferrara if Juve do not play well in Wednesday's trip to high-flying Parma, where Fabio Cannavaro is suspended, and Sunday's home game with Milan.

The Turin club have backed Ferrara and denied contact with Hiddink but more dreadful performances by close-season signings Felipe Melo and Diego could force their hand.

Fiorentina, who also had a bad patch before the break to drop to 10th, welcome defender Felipe for the Tuscan derby at lowly Siena after the Brazilian signed on loan from Udinese.

© Copyright 2022 Reuters Limited. All rights reserved. Republication or redistribution of Reuters content, including by framing or similar means, is expressly prohibited without the prior written consent of Reuters. Reuters shall not be liable for any errors or delays in the content, or for any actions taken in reliance thereon.
Related News: AC Milan, Inter Milan, Genoa, Cagliari, Guus Hiddink
COMMENT
Print this article