16:48   Tajinderpal fails to make shot put final
India's Tajinderpal Singh Toor failed to make the final of the men's shot put event at the Tokyo Olympics on Tuesday.
Toor registered a best effort of 19.99m in his first attempt before fouling with his next two efforts, to finish way short of the automatic qualifying mark of 21.20m.
The Indian finished 13th out of 16 participants in Group A.
New Zealand's Tomas Walsh topped the qualification with 21.49m, while Brazil's Darlan Romani managed 21.31m and Egypt's Mostafa Hassan finished third with a season best of 21.23m to secure direct qualification in the final.
Read more > 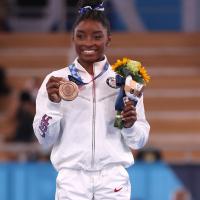 16:00   Biles returns to claim balance beam bronze
Simone Biles made a fearless return to competition on Tuesday, capping a tumultuous Tokyo Games with a bronze medal on the balance beam.
The final gold of the women's artistic gymnastics programme would go to China's Guan Chenchen with a score of 14.633 and the silver to her compatriot Tang Xijing but it was Biles who grabbed the spotlight by courageously returning to competition.

Biles, three times a world champion on the beam, finished with bronze but it was considered a victory after a dramatic Tokyo Games in which she abruptly dropped out of the team competition last Tuesday after performing just one vault citing mental health issues.

The 24-year-old came to Tokyo eyeing a record haul of six golds, which would have made her the most successful female Olympian of all-time across any sport, but instead suffered a crisis of confidence that led to her withdrawing from the all-around, vault, asymmetric bars and floor exercise finals.

Biles, winner of four gold medals at the 2016 Rio Olympics, explained later she was dealing with the "twisties" -- a type of mental block where gymnasts are disoriented during their gravity-defying sequences.
Read more > Petecio who was seen as the favourite in the fight, took silver. Italian Irma Testa and Briton Karriss Artingstall were awarded bronze.
Read more > 10:00   Wrestler Sonam loses opening bout
Young Indian wrestler Sonam Malik lost her opening bout on criteria to Mongolia's Bolortuya Khurelkhuu in the women's 62kg category in Tokyo on Tuesday and will now have to wait and see if she gets a repechage round on her Olympic debut.
The 19-year-old led the bout 2-0 after scoring two push-out points but the Asian silver medallist Khurelkhuu effected a take-down move with just 35 seconds left in the contest to level the score.

The score remained 2-2 till the end but since it was the Mongolian who scored the last point with her move, she was declared winner on criteria.

There was hardly any action during a major part of the bout. No move was made till one and a half minute with the two wrestlers measuring each other from standing position.

The Mongolian was put on activity clock but Sonam scored a push-out point to take a 1-0 lead and kept that till the end of the first three-minute period.

Another push out took her 2-0 in front. Sonam did not let the Mongolian make any move for a major part but Khurelkhuu managed to get hold of the Indian's leg and got the decisive take-down.

Sonam, a two-time Cadet World Champion (2017, 2019), had qualified for the Tokyo Games by making the final at the Asian Qualifier in April in Almaty.

Khurelkhuu being an experienced contender knew when to get the decisive move.

If the Mongolian makes the final, Sonam will get a repechage round to be in contention for the bronze medal.
Read more > 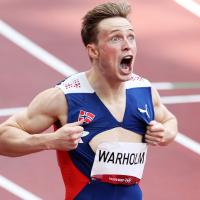 The 29-year-old needed a huge effort to make it to the 12-woman final and though she improved marginally, it was nowhere close to the automatic qualification mark of 63m.

The effort was also well below her personal best of 63.24m, which she achieved in the Federation Cup earlier this year.

Maria Andrejczyk from Poland was the only thrower who could earn the automatic qualification by sending the spear to 65.25m in her first attempt.

As per rules, thrower, who manages 63m, or at least 12 best performers qualify for the final.
Read more >

08:46   India men lose to Belgium in semis
We enter the final 10 minutes of the match as India continue to lose possession too easily. It has been all Belgium since the third quarter and they continue to attack and win another penalty corner after Harmanpreet is struck on the foot.
They go for the indirect rout as Rohidas is hit on the foot to earn Belgium their 12th penalty corner.

Hendrickx goes for the drag flick but right in the path of Sreejesh who palms it away easily.

Penalty corner after penalty corner for the Belgians. This time Surender is struck on the foot as the umpire checks for the penalty stroke.

Belgium are awarded a penalty stroke!

Hendrickx completes his hat-trick as he converts the penalty stroke to put Belgium up 4-2 in the 53rd minute.
A good low shot which strikes Sreejesh's pads and goes through for the goal as Belgium double their lead with seven minutes left.
A late goal for Belgium as Dohmen taps into an empty net from close range to put his team up 5-2.
India men's hockey team lose to Belgium 2-5 in the semi-finals.
Read more > 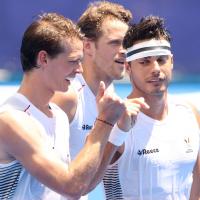 08:26   Belgium lead India 3-2 in semis
A blow for India as captain Manpreet Singh is shown a green card and has to sit out for the next two minutes.

Belgium make the advantage count as they rush into another attack and earn their eight penalty corner. Hendricxk goes for the drag flick but Rohidas rushes out and blocks the shot, resulting in another penalty corner.

A good drag flick from Hendrickx this time which is blocked by Indian goalkeeper Sreejesh.

Belgium get third time lucky as Hendrickx breaches the Indian defence as he blasts the shot into the right corner out of the reach of Sreejesh as they take a 3-2 lead in the 49th minute.
Read more >

08:16   India v Belgium 2-2 after 3rd quarter
An early opportunity for Belgium in the third quarter as Kina Antoine has enough time in the Indian circle but he fires his shot wide of the Indian goal.
Sumit has been tripped as he charges into the circle resulting in the penalty corner for India, which the Belgians challenge.
The penalty corner stands as Belgium also end up losing their review.
The Belgium defender rushes out to stop the drag flick from Harmanpreet.
Belgium break through into the Indian circle but Sumit comes up with a good block to ward off the danger.
Belgium getting a lot of possession as they look to surge forward and end the third quarter with a goal but India's defenders have been upto the task.
The Indian defence caught napping as Cedric Charlier gets a good ball in the circle but he is unable to make most of it.
It has been all Belgium in the last few minutes with India only having to defend.
No goals in the third quarter as the score stays 2-2 with just 15 minutes left in this thrilling semi-final contest.
Read more > 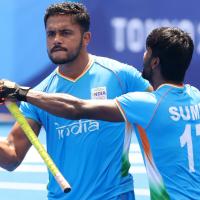 07:48   India vs Belgium 2-2 at halftime
India take the video referral in search of a penalty corner after Gurjant Singh is brought down in the cicle, but the appeal is rejected as India also lose the right to further video umpire referrals.

Belgium win a penalty corner but India again defend solidly to keep out the danger.

A brilliant ball through to Dilpreet Singh, who puts in a good pass in the circle to Shamsher Singh's reverse tap in is blocked by the Belgium goalkeeper before India win the penalty corner.

However, Rupinder's drag flick goes wide with India missing a good opportunity in the closing minutes of the first half.

The two teams go into the halftime break at 2-2.
Read more >

Third penalty corners in a row but Belgium unable to make most as India stave it off.

India with a quick counter-attack at the other end. Captain Manpreet Singh with a beautiful through ball from the right to Mandeep crosses it but Belgium manage to clear it after a goalline scramble.

Belgium continue to attack as they get another penalty corner, their fourth in the second quarter. This time Alexander Hendrickx drag flicks in into the bottom right corner with a low powerful shot to level things at 2-2 after 19 minutes.
Read more >

07:24   India lead 2-1 vs Belgium
India get their penalty corner as Rupinder Pal's drag flick as well saved by Belgium goalkeeper Vanash Vincent but Belgium clear away the rebound as Nilakanta and Amit Rohidas are unable to get to the rebound.

India have been quite impressive after a slow start with some quick passes and slick moves going forward, with Belgium having to sit on the backfoot and defend.

A quick move from Belgium as they attempt to build an attack and get the ball into the scoring circle but Rohidas comes up with a crucial interception.
An entertaining first quarter as Belgium opened the scoring after just 70 seconds before India staged a superb comeback through Harmanpreet and Mandeep!
Read more > 07:16   India lead 2-1 vs Belgium
India have fought to level scores in the ninth minute. They earned a penalty courtesy of a sharp video referral as they went for the variation first time around but failed to convert but ended up winning another penalty corner.
Harmanpreet Singh cracked the second penalty corner in the bottom right corner to level scores in the seventh minute.
Mandeep Singh put India in the lead a minute with the reverse as they go up 2-1 in the eighth minute.
Read more >

07:07   Belgium take early lead vs India
Belgium have rocked India with an early lead as Loick Luypaert converted a penalty corner in the second minute to put Belgium 1-0 ahead.
Lupayert scores with a perfect drag-flick for hs first goal of the tournament.
It will be interesting to see how India respond to this early setback.
Read more >

'You are our champion': deported Djokovic gets warm welcome home