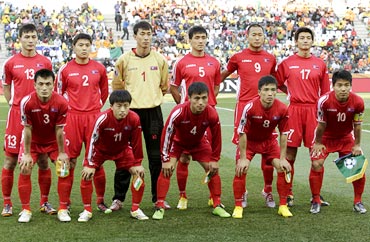 John Duerden, freelance football correspondent for the Pyongyang-based Korean Herald, who is covering the World Cup in South Africa, writes an exclusive for rediff.com on the fortunes and future of the North Korean team.

As the full moon started to rise in the purpling sky above the Mbombela Stadium last Friday, it wasn't just a farewell to the day or the 2010 World Cup in the city of Nelspruit, just four games took place here, but it was also goodbye to North Korea.

There were no fans to be seen from East Asia and not much more than a handful, albeit colourful and energetic, clad in orange but the locals and neutrals that came out determined to enjoy themselves and did just that.

It is hard to say if the same can be said of the North Korean players. The men in red were under the cosh from the start as the Elephants stampeded in the direction of goalkeeper Ri Myung Guk. Two early goals threatened a repeat of the Portuguese massacre but thankfully, for some at least, it didn't happen and DPRK held fairly firm.

The memory of facing a determined Didier Drogba is something that the defenders will take back with them as they come to terms with life after the World Cup. The team may have collected zero points in South Africa but it did provide one of the stories of the World Cup. The performance against Brazil was hailed around the world. That freezing night at old Ellis Park in downtown Johannesburg may have seemed a lifetime away on a warm afternoon at the brand new Mbombela arena nestling in the rolling hills of the Mpumalanga region

Perhaps it all started too well as coach Kim Jong Hun, who played a fascinating game with the international media from start to finish ('we may play more attacking but then we may defend,' he said ahead of the Ivory Coast game), opened up his well-organised outfit that had performed so well against the Brazilians to take the game to Portugal. We all know what happened in Cape Town.

The team never gave less than 100 percent though. The thrashing in Cape Town took some time to recover from. Coach Kim talked of restoring honour against Ivory Coast and the team did just that. All that was missing was a goal. Jong Tae Se came close in the second half. 'The People's Rooney' made a name for himself in South Africa. When I talked to him after the final game, he was tired and frustrated. From his tears before the match against Brazil to the final second of the Ivory Coast clash, Jong gave his all -- berating himself for miscontrolling the ball, encouraging team-mates though their passes had gone astray.

The all action forward has long had a desire to play in England and there are sure to be a number of rumours and reports linking the striker, who was born and raised in Japan and still plays his football there, are sure to come thick and fast over the summer.

Jong didn't return to Pyongyang like some of the others, he went instead to Japan, but the residents of North Korea greeted the team warmly. The Brazil match was shown in full 17 hours after the game actually took place, partly because North Korean television doesn't broadcast during the night (the game took place at 3.30 am Pyongyang time) Only snippets of the Portugal game were telecast while Ivory Coast was shown the following day. The regime of Kim Jong II officially loves football and helps with training and tactics tips if reports from the state media are to be believed, is happy to use football as propaganda and North Korea doing battle with the best in the world is lapped up by the masses.

Now it is up to North Korea to build on this experience. Until a year ago, many of the players had never even played outside Asia but in the last few months they have travelled around Europe, South America and now Africa. Names like Ji Yun Nam will be remembered.

These players will be better for what they have gone through in qualification and many are young enough to go on and have good careers. Pyongyang is keen for more overseas experience and it will be very interesting to see how that turns out. The 2011 Asian Cup will be a good test of just how much this North Korean team has learned and just how good they could become.