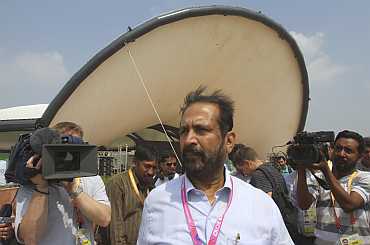 Sheela Bhatt sees things falling into place after a tour of the Commonwealth Games Village.

On September 25, Commonwealth Games Organising Committee chairman Suresh Kalmadi had asked more than 50 media persons to join him on a conducted tour of the Games village, the epicentre of infamy.

The man is unrelenting, unrepentant, but nervous. In spite of international humiliation he is unmoved. He is, surely, petrified of some television reporters who are running a campaign to overthrow him from his current position, but still has some tricks up his sleeve to carry on during and after the Games.

His fretfulness was visible, as every ten minutes he would call for his crony, Lalit Bhanot, the general secretary of Organising Committee. Bhanot has complete hold over the sullied man.

Kalmadi's first sentence in his defence, while welcoming the reporters at the venue, was, "What can I do if you give me these flats so late?"

When rediff.com asked about the dirty toilets, filth on-site and water-logging pictures that were published, his reply was shocking: "These pictures are not from the Games venue!"

However, he gave different answers to different reporters. On camera, he didn't say so.

"If you are blaming me for failure, then you should also credit me with success after the Games," he added.

Asked 'what keeps you going; are you religious?', Kalmadi, the man behind the Pune Ganesh festival, replied, " I am religious."

Then he added: "I have done division of labour. I am religious, but my wife (Meera) handles that part!"

Athletes are enjoying their stay in the village 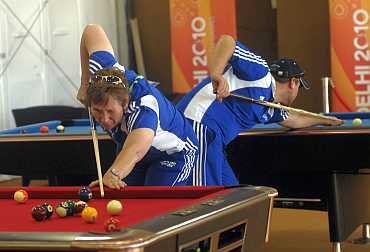 Asked how many medals India will win at the Games, Kalmadi was confidence personified as he replied: "We will win 70!" For the record, India won 50 medals at the last Games in Melbourne -- 22 gold, 17 silver, 11 bronze.

However, on Saturday, he was a sideshow of the event as reporters had a closer look at the Games village.

The organising committee and other authorities cannot be defended for the unpardonable delay in putting things together for the Games, but after the great fiasco, the media could see that things were somehow "fixed" at the larger part of the venue.

Believe it or not, your correspondent, who has seen many venues at the Beijing Olympics, can vouch that right now most of the flats in the Games village are not in bad shape.

More than a dozen Indian athletes told rediff.com that they are "enjoying" their stay in the village. The panoramic view of the site is indeed impressive; it has granite, vitrified tiles in soft shades, and imported bathroom fittings.

The back-up power system is from Japan and there are even sleek models of television sets and spilt air conditioners. The furniture and other stuff is also brand new, more than an athlete would need. There are also large hang-outs of Warli and Gond paintings, giving a humane touch.

80 per cent of the flats are fine 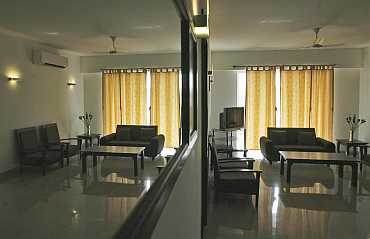 As physically challenged athlete Kumar said, "Rooms are fine. We are not living here for lifetime."

India's legendary athlete Milkha Singh has said with irritation that if athletes have a problem with the Games village they should stay in hotels.

In fact, foreigners should not have a problem with the Games village NOW because no less than Prime Minister Manmohan Singh and his office are monitoring the issue.

Rediff.com on Saturday asked about a dozen sports correspondents from Delhi, who were among those inspecting the facilities, if they liked the venue. And all of them said they were very impressed. Just a few were of the opinion that the "finishing work" is shoddy and takes away the charm of living there.

Problem of overspending should be taken up after Games 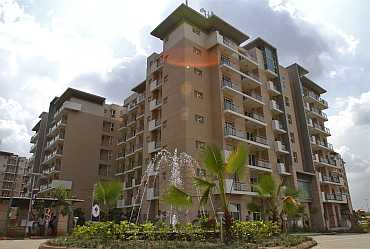 That's true. The flats and surroundings lack finishing. A quick-fix job of tiling was done but, surely, the overall get-up of the venue is reasonably fresh and certainly livable.

A worker who was doing pest control on the site said had rain had not continued for 15 days (the first time in two decades), and the flats been handed over even a month earlier than July, these Games would have brought pride to India.

He explained that dust, mud and stray dogs are part of any construction sites. When luxurious buildings are taken over, he said, things fall in place only when the contractors and workers wind up their business.

The issue of overspending and vulgar waste can be and should be taken up after the Games, but, right now, there is no doubt that those residential towers which are getting cleaned up have enough comfort, light, air and space.

The Delhi Development authority, a notoriously corrupt body, put up these 1168 flats by awarding construction contracts to Emaar-MGF. The DDA was to hand over the venue to the Commonwealth Games Organising Committee. For a change, one should believe what the discredited Kalmadi says.

The differences between the builders, Emaar-MGF and DDA, should take a large portion of the blame. When the world faced the economic downturn, Emaar-MGF found it difficult to sell the flats. So, instead of sticking to the deadline to complete them, they simply stopped construction to create pressure on the DDA and Organising Committee.

Then, they asked for a huge interest-free loan from the government and favours in various slimy ways. Instead of worrying about the time that was running out fast, the local government, DDA and Emaar-MGF negotiated a deal. As reported earlier in rediff.com, the shameless deal was cut, under which Emaar was promised Rs 700 crore out of the sale of 333 flats to the DDA. The deal was done at the rate of Rs 11,000 per square feet. 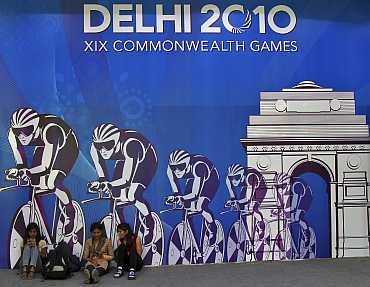 Image: Volunteers sit infront of a board

The bailout could be done only because the entire plan of the Games' village was on the edge. The usual tactics of missing deadlines to cough up additional money from the authorities worked. And, today, due to this particular loss of time, the entire nation is shamed. India's pride was hit hard just because of that tussle over Rs 700 crore.

Australia's High Commissioner, Peter Vergheese, talking to rediff.com, said, "Our team will live in the venue. We have some issues but it will be sorted out. I can see that improvement is very fast."

Asked why Prime Minister Julia Gillard has used harsh words on the security situation in India, Verghese replied, "I don't think she used harsh words. Such advisory is customary. In Austrlaia, the prime minister is on television every other day, unlike in India, where the PM comes rarely on TV."

Professor Festus Kaberia, Kenya's High Commissioner, told rediff.com, "I think the Games village is quite fine. It has state-of-art facilities."

He said his 300 countrymen, including athletes, would check into the Games village without any issue.

These freshly-cleaned flats have minor issues but that would take less than an hour to correct, said an official from Indonesia.

In fact, most athletes who were having lunch when the media team went to the dining hall had nothing to complain about. The food is a big hit, said Australia's manager.

High Commissioner of Tanzania John W H Kijazi was also impressed with the Games village. "Talk about the Games, now," he said.

Most diplomats didn't complain about filth 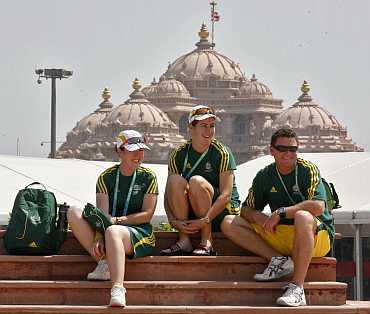 Image: Australian athletes sit in front of the 'Akshardham temple at the Commonwealth Games athletes village

Most of those at the Games village said had the Organising Committee shown them the facilities in advance, corrections could have been made earlier. Most diplomats of Commonwealth member countries, except Australia, New Zealand, England and Canada, did not complain about the filth, but the delay in taking them to the venues for inspection.

An African high commissioner said it is not good to make a fuss about the filth. "The dirt can be removed in no time, but why so much delay?" he said.

Indeed, it's a given fact that India is having a tough time because the Organising Committee had unfit, inefficient, tainted and shady characters, without any understanding of power of communicating and use of modern social networking. 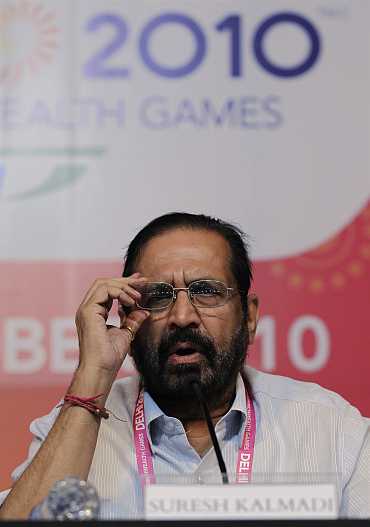 However, cronies around Kalmadi are defending him, even now.

Congress man Jagdish Tytler, another Kalamdi man, told rediff.com, "Kalmadi is getting a bad name even for crimes he has not committed."

He assured that even after the Games Kalmadi will not be removed from his post. He said, "He is not part of the government. OC of Commonwealth is an independent body."

Another office-bearer says Sports Minister M S Gill will certainly go, but not Kalmadi, because the delay is more because of those bodies who were assigned the job of construction of venues. They are headed by Gill.

Execution of Games work is a collective failure 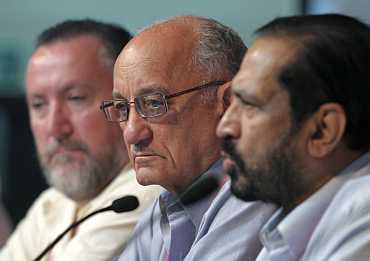 In fact, seven years back, Kalmadi and Delhi Chief Minister Sheila Dikshit had ganged up to get a big chunk of assignments for the Commonwealth Games.

Sunil Dutt, the then sports minister, was so frustrated that he went and met PM Singh. But Congressmen were a divided lot. Arjun Singh threw his support behind Kalmadi and Dixit. In New Delhi another group, led by Ajay Maken, developed. The Dixit-Kalmadi nexus became powerful.

After the death of Dutt, Mani Shanker Aiyar, during his two-year stint as sports minister, further delayed the planning for the Commonwealth Games because his heart was not with it and he had serious issues with Kalmadi.

He could not break into Kalmadi's hold over vested interests running the show. The PMO's monitoring was also weak. Thus, the delay in execution of Games work is a collective failure of the Congress and government.