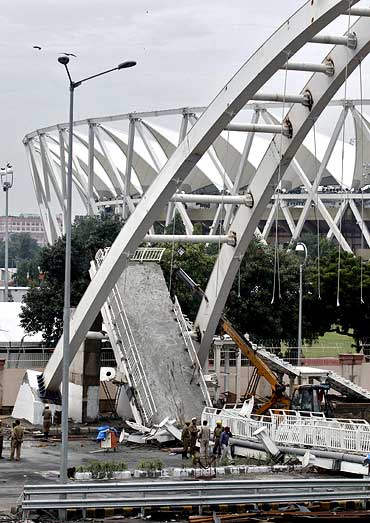 It was meant to be emerging India's showcase event for the world -- the coming out party the Olympics had been for Beijing.

But preparations for next month's Commonwealth Games are down to the wire and the event risks descending into farce.

Commonwealth Games Federation president Michael Fennell said on Tuesday the two-week event, starting October 3, was seriously compromised by conditions at the Games village that have "shocked the majority."

Fennell's comments came as no surprise to observers. At least 19 people, mainly workers, were injured when a footbridge under construction to the main Games stadium collapsed on Tuesday, highlighting fears of shoddy workmanship.

The shooting of two foreign visitors by suspected militants in Delhi on Sunday has combined with a dengue fever epidemic, heavy monsoon rains, delayed construction, graft scandals and traffic chaos to give the Games that sinking feeling.

'Fingers crossed, India may pull off a miracle' 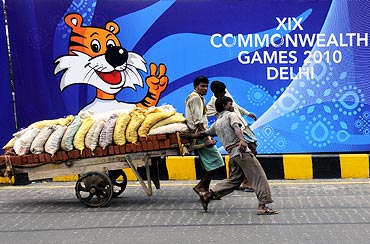 Image: Labourers pull a handcart loaded with bricks and sand in front of boards advertising the Commonwealth Games

Dismal preparations have underscored for many the out-of-touch and slow-paced leadership of Prime Minister Manmohan Singh and his Congress government, raising questions how India's graft-ridden, inefficient state can modernise to compete with China.

The government's pro-poor voter image may suffer from tales of billions of wasted dollars. A perception of India's entrepreneurial process threatening Western jobs may slip if roofs leak, athletes get dengue and journalists wonder where the Wi-Fi is.

"Fingers crossed, India may pull off a miracle," said Boria Majumdar, a sports historian who has written the book 'Sellotape Legacy: Delhi and the Commonwealth Games'.

"But it will have to be a miracle. No doubt about that". 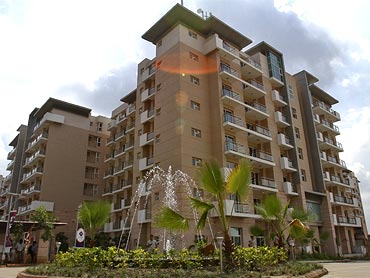 On a recent visit to the village, the lack of preparation was stark. A Reuters reporter witnessed dirty apartments with empty boxes strewn about, as labourers worked to finish necessities such as paths and pavements.

A crude cement slope appeared to be an unplanned fix for disabled athletes requiring access to one apartment block.

The athletes' training centre was still to be fitted out, its reception area a dusty, empty expanse as boxes of equipment piled up outside. The water in the training and recreational swimming pools was dirty, with insect larvae breeding on the surface.

"They have had some delegations staying there and they have been reporting constantly about the filth in the village," Fennell told CNN-IBN TV. "There is a lot of stuff there that needs to be cleaned."

The CWG problems are not receding 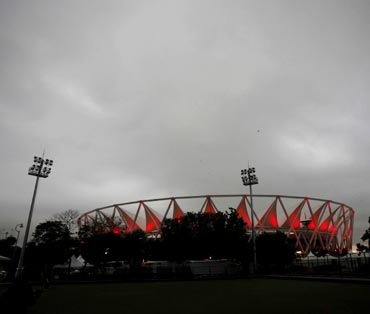 Organisers say there is no question the Games will be put off, but the nightmare is that one delegation exits and that leads to an avalanche. And the problems are not receding.

Of the nearly 100,000 accreditations for officials and media, only around a quarter have been issued.

With the $6 billion Games way behind schedule, there have been worries stagnant puddles in construction sites have proved breeding grounds for mosquitoes. Hundreds of Delhi residents are hospitalised in one of the worst epidemics in years.

The Games village and security -- construction delays mean venues have been locked down by police only two weeks before the Games -- are the two major weakness of the Games, Majumdar said.

The opening ceremony may be ruined by rains 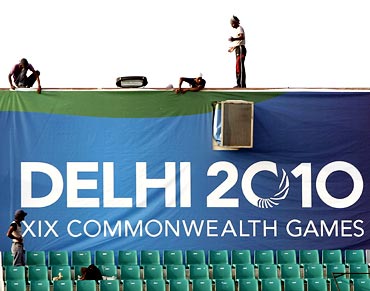 The insistence to hold the Games in October has led to some athletes pulling out due to conflicts with Olympic qualifiers. October also means the opening ceremony may be ruined by rains.

Triple Olympic sprint champion Usain Bolt of Jamaica is the most high profile of a bunch of top athletes who have decided to skip the event.

But many venues, including the main Jawaharlal Nehru stadium, where an aerostatic balloon hovers above, have been praised as world class. The hope for organisers is that TV coverage of the Games will focus on events rather than the arrangements.

Other events like the 2004 Athens Olympics were dogged by problems but turned out fine. Beijing was hit by worries over the torch relay and Tibet protests but ended in media glory.

Some officials say foreigners do not understand how India works. Sport Minister Manohar Singh Gill said it is like an Indian wedding where chaos ends in a well-planned ceremony.

But scandals have sent shivers down the Congress-led government that since the summer has effectively replaced many organisers with top civil servants, giving the Games access to more funds.

However the Congress government was late getting involved, highlighting its slow pace in dealing with issues ranging from economic reforms to separatist violence in Kashmir.

2009 general elections also may have put on hold many preparations, with politicians not knowing if they would be able to take the credit for any effort.

'This will not do the government any good' 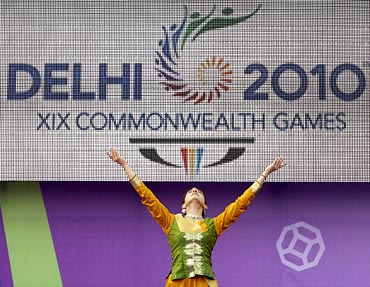 Image: A dancer performs during the launch of the 2010 Commonwealth Games Queen's Baton Relay

While high inflation is the biggest issue for a government that has eyes on millions of poor rural voters rather than Delhi residents, graft stories will worsen the Congress party's image.

"It's just one of so many goof-ups," said Paranjoy Guha Thakurta, a political economist. "This will not do the government any good. When you have a big bash and benefits are minimal it sharpens and widens the inequalities in India. People notice."

But for many voters, they are not "India Games" but "Delhi Games" and the capital is seen as a distant and weak authority.

The one that may suffer failure will be the politician who lives a few miles away from the stadiums, a 77-year-old leader whose legacy as a reformist and globalist may sink in the world's eyes.

"The prime minister knows how significant it is for India's image," said Majumdar. "He knows he cannot afford to fail."