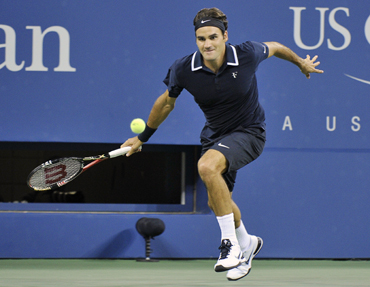 Image: Roger Federer of Switzerland chases down a return to Jurgen Melzer of Austria
Photographs: Reuters

Roger Federer brushed aside Austrian Jurgen Melzer in straight sets Monday to set up a revenge match against Sweden's Robin Soderling in the quarter-finals of the U.S. Open.

Federer, 29, played with his accustomed style on Arthur Ashe center court, registering 41 winners to 23 for the Austrian as he continued his 2010 Flushing Meadows run without the loss of a set.

Waiting in the last eight for the second-seeded Swiss is fifth-seeded Soderling, who eliminated Federer in the quarter-finals of the French Open for his only win against him in 13 meetings.

Wozniacki ready to take the next step 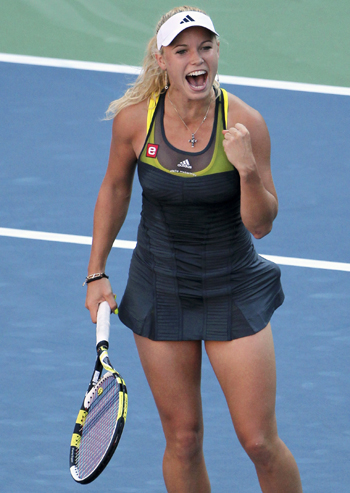 Image: Caroline Wozniacki of Denmark celebrates her victory against Maria Sharapova of Russia at the U.S. Open

A year older and a year wiser, 20-year-old Caroline Wozniacki served notice Monday she could go one step further at Flushing Meadows, which would bring the Dane a U.S. Open title for her first grand slam triumph.

Wozniacki benefited from 36 unforced errors from the 14th seed, including nine damaging double faults, but she took credit for drawing mistakes from the three-time slam winner.

"I was playing good tennis. I felt like I was playing well out there. I made her do those errors and I'm really happy to be through and that I won this match," Wozniacki said.

Wozniacki has followed her impressive 2009 season with an even better campaign this year.

She has won four tournaments in 2010, posted a 15-1 record since Wimbledon and before Monday's match had lost only three games total from her first three Open victories.

"I definitely think I've improved a lot, not only physically, but also I believe in myself more. I believe I can do it," she said. "Also I think I can mix up my game a little bit more than I could last year."

A U.S. Open victory would vault her past American Serena Williams, missing this championship because of a foot injury, and into the world number one ranking.

Wozniacki was all business on court, controlling points against Sharapova with her steady groundstrokes, striking 16 winners and just 10 unforced errors. 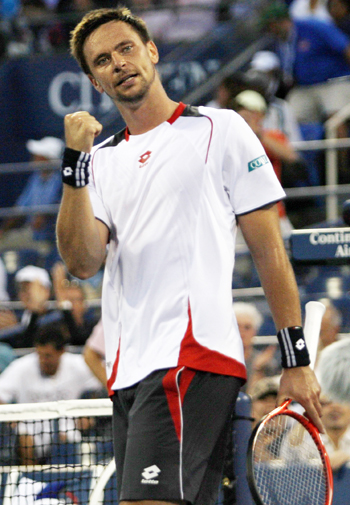 Image: Robin Soderling of Sweden celebrates his win over Albert Montanes of Spain

The last time Soderling faced the former world number one in a grand slam, at this year's French Open, he ended Federer's run of 23 consecutive grand slam semi-final appearances.

As the only player other than the injured U.S. Open champion Juan Martin del Potro to have beaten both Federer and world number one Rafa Nadal in a grand slam, Soderling is confident he has the game to beat the pair.

"I've played Roger many times. I know his game and he knows mine. I'm pretty sure how I need to play to have a chance to win but it's going to be extremely difficult."

Soderling has dropped just one set in his last three matches but admitted he needed to improve his game to beat the top two players in the world.

By his own admission, in the opening set of his last 16 encounter, he lacked the sort of game to trouble Federer or Nadal. 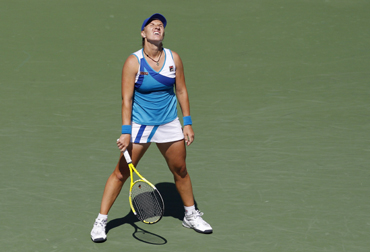 Image: Svetlana Kuznetsova of Russia reacts to a poor shot against Dominika Cibulkova of Slovakia

Former U.S. Open champion Svetlana Kuznetsova hit out at tournament organisers on Monday after she was beaten in the fourth round by unseeded Slovakian Dominika Cibulkova, the lowest ranked player left in the women's draw.

Kuznetsova, who won the title in 2004 and was runner-up in 2007, attributed her 7-5, 7-6 loss to the scheduling, saying it was unfair that she had to meet Cibulkova in Monday's first centre court match after playing the late night feature on Saturday night.

"It was very hard for me to play one night the second night match and then in one day to play at 11 o'clock," Kuznetsova said.

"I just I didn't feel good today. I was very flat. I was just fighting with myself and was not doing all the time the things I was supposed to do."

Kuznetsova, seeded 11th, beat her fellow Russian Maria Kirilenko in straight sets on Saturday night but was unable to repeat that performance against Cibulkova, squandering leads in both sets and contributing to her defeat with a whopping 42 unforced errors.

Kuznetsova also criticised Australian Open officials after she won a late night match in Melbourne this year and is just the latest in a long of line of players to question the wisdom of scheduling matches so late. 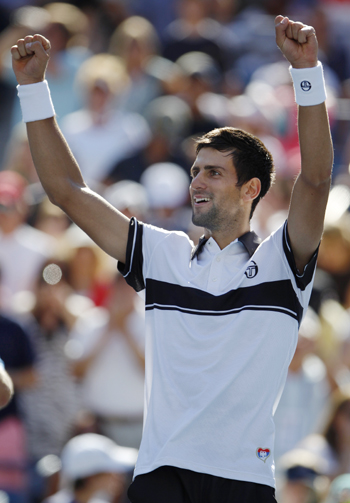 Novak Djokovic stormed into the quarter-finals of the U.S. Open on Monday with a brilliant performance that underlined his credentials as the biggest threat to Roger Federer and Rafa Nadal to win the men's title.

Djokovic, getting better with each match after a shaky start to the championship, laid down the challenge to his main rivals with a comprehensive 6-3, 6-4, 6-1 over American crowd favourite Mardy Fish, the 19th seed.

Fish had gone into the match with real hopes of pulling off an upset after a string of impressive results during the hardcourt season but could not make any inroads against the Serbian world number three, who is back in the dazzling form that took him to the final at Flushing Meadows in 2007.

"It's very encouraging at this stage of the tournament that I'm raising my game and feeling more comfortable on the court," Djokovic said.

"I played a great match today."