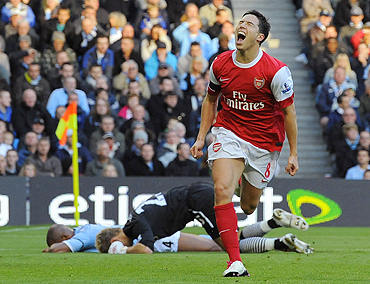 Manchester United and Arsenal enjoyed landmark victories over Stoke City and Manchester City respectively on Sunday to stay on the coat tails of champions Chelsea in the battle for the Premier League title.

Arsenal had not beaten any of their current big four rivals, Chelsea, United or Manchester City, for 18 months but helped by the fifth-minute sending off of Dedryck Boyata they triumphed 3-0 at Eastlands. 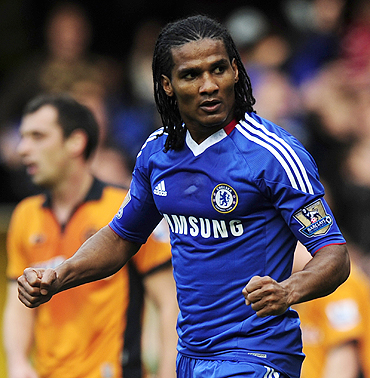 Chelsea, who beat Wolverhampton Wanderers 2-0 on Saturday, lead the standings on 22 points with the two Manchester clubs and Arsenal on 17.

Liverpool, normally challenging those sides for a Champions League slot, remain in the bottom three despite claiming their second win of the season when Fernando Torres's first goal since August secured a 2-1 Anfield win over Blackburn Rovers.

Arsenal had Cesc Fabregas back pulling the strings in a league game for the first time in five weeks and he made a huge difference with a display full of promptings and probings.

One of his passes, into the path of Marouane Chamakh, produced Boyata's mad moment with a rash trip outside the box.

'We played some outstanding football' 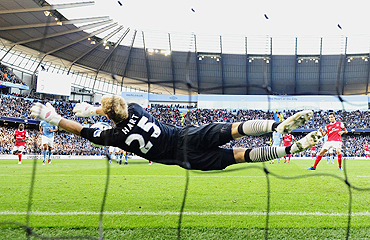 Arsenal soon made their numbers pay when Samir Nasri finished a neat move to open the scoring after 21 minutes and, although Joe Hart did well to save a Fabregas penalty, the Spaniard made amends by setting up Alex Song for the killer second after 66.

Nicklas Bendtner came off the bench for his second appearance of the season to complete the scoring.

"We played some outstanding football at times and it's very difficult to stop a team playing at that tempo," Fabregas told Sky Sports. 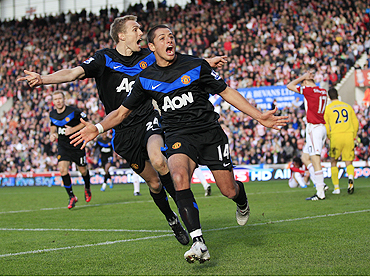 After Rooney had hogged the headlines all week it was his stand-in Hernandez who was the toast of Manchester United fans after his double overcame battling Stoke.

He opened the scoring with a dextrous back-header after 27 minutes but, as United eventually sat back to defend their lead, they looked to be heading for another draw when substitute Tuncay Sanli curled in a lovely equaliser after 81.

Hernandez, however, topped an impressive all-round display by seizing on a loose ball to prod in the 86th-minute winner.

"We never give in, we actually started to play after we lost the goal," said United manager Alex Ferguson.

"It's really difficult here as they really compete for everything. We got a bit careless but we managed to up our game just enough to get through." 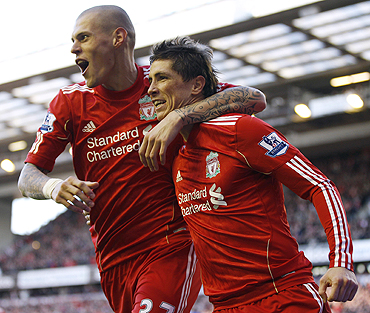 Liverpool remain in the relegation zone on nine points but there was a real feeling of relief around Anfield as they not only chalked up a rare win but played some enterprising soccer.

Torres and Steven Gerrard, both rested from Thursday's Europa League trip to Naples, both looked sharp.

Sotirios Kyrgiakos put Liverpool ahead early in the second half with a header and after a Jamie Carragher own goal in the 52nd minute, Torres grabbed the winner a minute later with his second goal of the season.