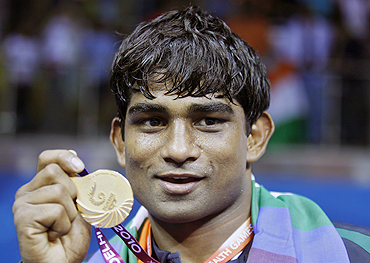 Paramjeet Samota, Suranjoy Mayengbam and Manoj Kumar brought some cheer back in the Indian boxing camp, winning gold medals in their respective categories at the 2010 Commonwealth Games in Delhi, on Wednesday.

Samota also had an easy outing against Trinidad and Tobago's Tariq Abdul Haqq in the final of the Super heavyweight +91 kg, winning 5-1. 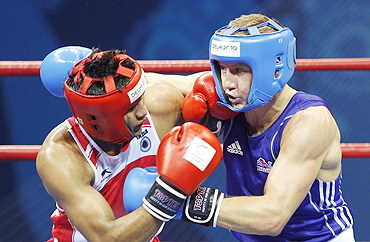 India's lesser known boxer Manoj Kumar announced himself to the world when he outclassed English boxer Bradley Saunders in the men's 62 kg light-welterweight final on Wednesday.

Manoj won the bout comprehensively, scoring a 11-2 win, to claim the gold medal. 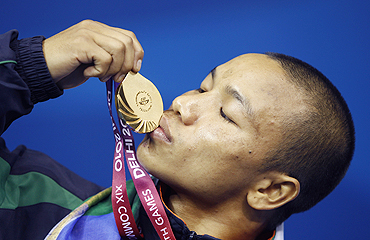 He didn't have to move a muscle as his opponent pulled out of the 52 kg flyweight event final to hand Suranjoy his first Commonwealth Games gold.

Kenyan Benson Njangiru pulled out of the event due to injury. 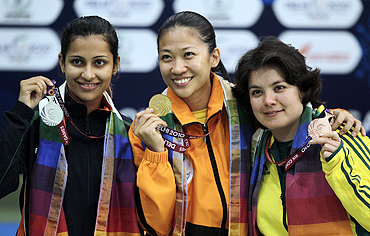 Indian shooters continued their golden run at the Games after Heena Sidhu won a silver and Samaresh Jung a bronze for India in shooting.

Having won the women's 10 metre air pistol pairs event, Heena won her second medal in the form of a silver when she scored 481.6 and finished behind Malaysia's Chin Bibiana NG Pei (481.9) in the singles 10m air pistol for women.

Dina Aspandiyarova of Australia got the bronze with 478.8. Bin Gai of Singapore won the gold with 570 points, while Roger Peter Daniel claimed the silver, with 563.

Later, another disappointment came in the form of Gagan Narang's poor showing at the shooting range. The shooter was visibly disappointed after his sixth and final event -- 50-metres Rifle Prone -- where he didn't even qualify for the final.

Narang was also unlucky that he missed out on a medal in the 50-metres Rifle Prone pairs event because his partner Hariom Singh was unwell. 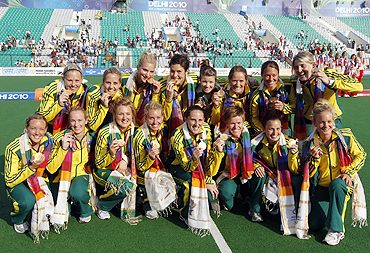 Australia successfully defended their Commonwealth Games crown, defeating a spirited New Zealand 4-2 via the tie-breaker in the final of the women's hockey event at the Major Dhyan Chand National stadium on Wednesday.

The Kiwi girls showed great fighting spirit and came back twice from a goal down to deny title holders Australia victory in regulation time. However, in the shoot-out Australia converted four out of their five strokes, while the Kiwis could score only from two.

The teams were locked 2-2 at the end of full-time, and even extra-time failed to break the deadlock. 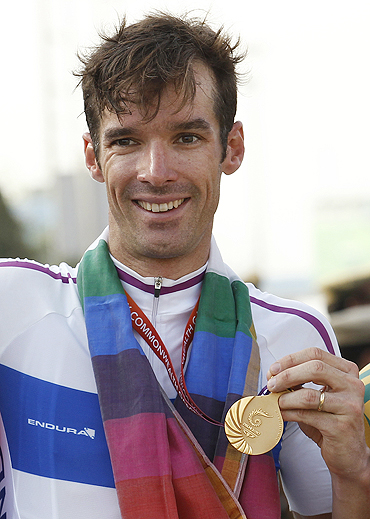 Both Canada and Scotland claimed their first gold medals in the cycling event in the 2010 Commonwealth Games in New Delhi on Wednesday.

Millar completed the race in 47 minutes and 18.66 seconds to secure the gold, while England's Alex Dowsett was only a second behind to take the silver. And Australia's Luke Durbidge timed 48:19.22 to bag the bronze.

Earlier on Wednesday, Canadian cyclist Tara Alice Whitten won the first gold for her country in the cycling event. 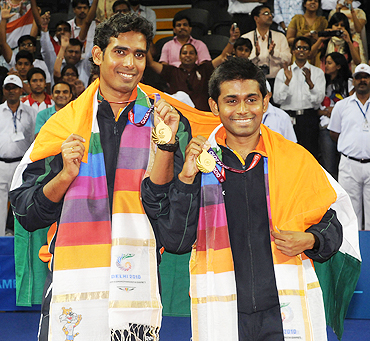 Earlier, Kamal's dreams of defending his singles title went up in smoke after a narrow 3-4 semi-final loss to Singapore's Yang Zi.

The Indian women had already clinched a silver, while the men won bronze in the team events. 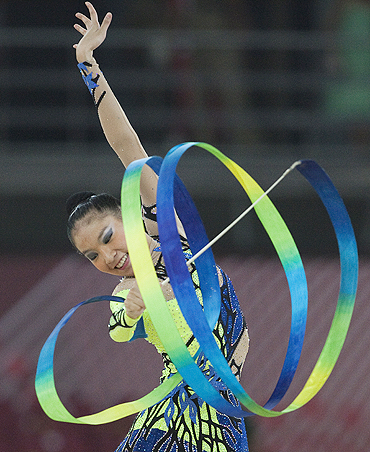 Image: Elaine Koon in action in the rhythmic gymnastics event on Wednesday

Gymnast Elaine Koon added another bronze for Malaysia after she clinched third placing in the rhythmic gymnastics individual all around women's final at the Delhi Commonwealth Games here Wednesday.

She scored 96 points in the event held at the Indira Gandhi Stadium. 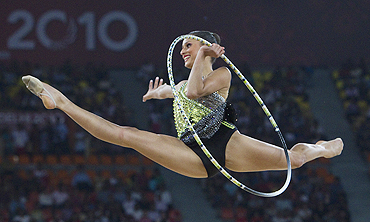 Image: Australia's Naazmi Johnson competes with the hoop during her gold medal performance in the rhythmic gymnastics event on Wednesday

Koon did well enough in the ribbon rhythmic gymnastics event to take bronze, but it was Australia's Naazmi Johnson who took home the big prize.

Naazmi won the gold with 100.1 points and Chrystalleni Trikomit of Cyprus grabbed the bronze after earning 98.97 points.