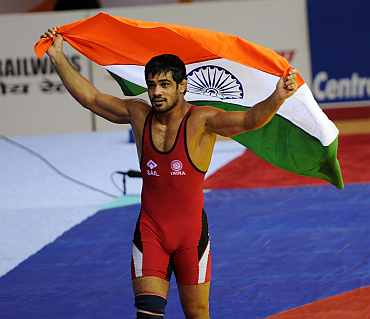 It turned out to be a record haul for India when Sushil Kumar clinched the gold in wrestling at the 2010 Commonwealth Games, in Delhi, on Sunday.

Sushil won the 10th gold medal for the hosts in the discipline as India entered the record book as the first country to win ten golds in wrestling at a single Commonwealth Games.

And, interestingly, it happened on the 10th day of the 10th month of the 10th year in the new decade.

A huge crowd thronged the Indira Gandhi Sports Complex to watch their favourite wrestler and Sushil didn't let them down. The 27-year-old put up a dominant display of power and quick reflexs to win the gold medal without dropping a single point in the entire tournament.

India is the new powerhouse in wrestling 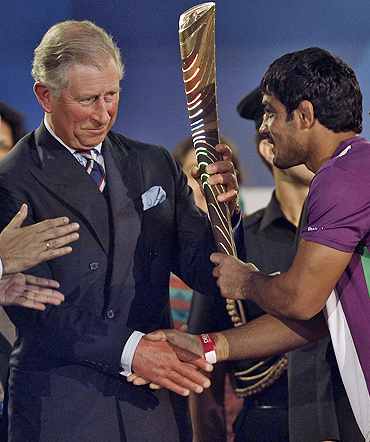 The gold medal continued an already impressive year for the Delhi wrestler, who, earlier this year in Moscow, became the first and only Indian to win a World Wrestling Championship.

He also had the honour of passing the Queen's Baton to Prince Charles at the opening ceremony of the Delhi Games.

Overall, India showed they are the new powerhouse in wrestling -- a sport that is being played across thousands of villages for ages under the traditional name of Kushti.

Won three gold on the opening day itself 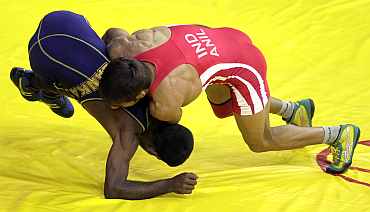 The Indian wrestlers were in command right from the start as they won three gold medals to make a clean sweep on the opening day of the sport.

Ravinder Singh pinned down England's Terence Christopher in the second period, after taking a convincing 7-0 lead, to win the Greco-Roman 60-kg gold medal.

That was followed by Anil Kumar beating Hassene Fkiri of Australia 3-0 in the 96-kg Greco-Roman event, making it three out of the three gold medals decided on the second day of the Games.Rajender Kumar bagged the fourth medal in wrestling in the Greco-Roman style.

Even women wrestlers were a force to reckon with 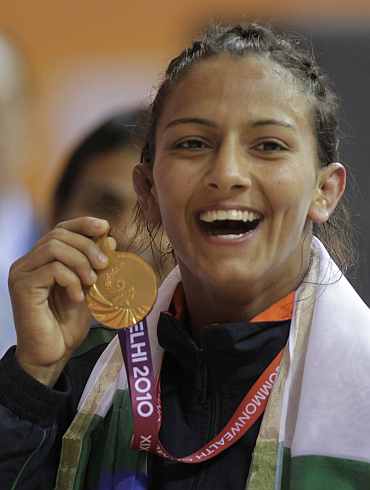 Even the Indian women proved they were a forced to reckon with as they claimed three gold medals in the freestyle category, which made its debut in the Delhi Games.

Geeta Kumari, 22, became the first Indian woman wrestler to win a gold medal at the Commonwealth Games, when she won the women's 55-kg event.

Alka Tomar, 22, and Anita, 25, also proved that India's future is bright as they clinched gold medals in the 59-kg and 67-kg class respectively. 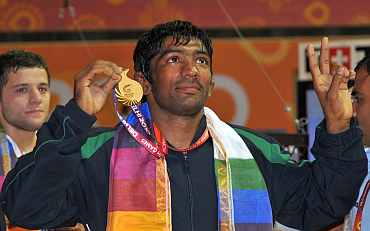 Yogeshwar Dutt was a class apart in the men's 60kg and ended his campaign in some style with a crushing victory over James Mancini.

It was the grappler's first major event after nearly 18 months and he was delighted to have made such a smashing comeback.

The stage was perfectly set up for Sushil on the final day of the wrestling competition, which was also witnessed by Congress president Sonia Gandhi and her son Rahul.

But nothing could steal the limelight away from Sushil, who pinned down his opponent in the second period to send the huge gathering into raptures. 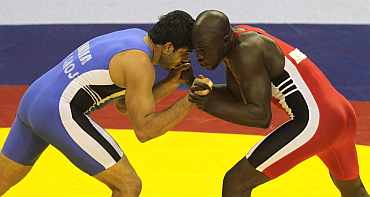 There were other medals too in wrestling with the Kumar trio of Manoj, Anuj and Joginder losing their title bouts to settle for silver.

In the women's Nirmala Devi took silver in the 48-kg freestyle and Babita Kumar in the 51-kg.

With a haul of 10 gold, five silver and four bronze medals, it turned out to be a successful campaign for India in Delhi.

And now the entire country is hoping they can replicate the showing at the forthcoming Asian Games.