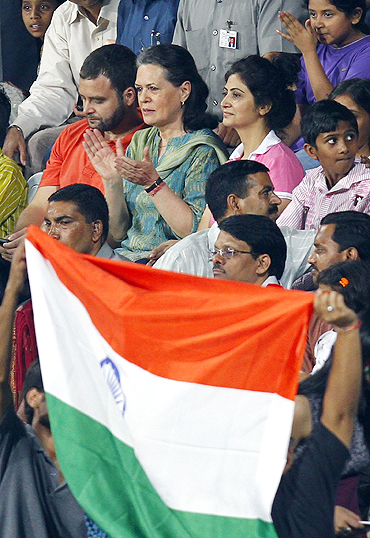 In a high voltage encounter and in the presence of a capacity crowd, Indian hockey stars delivered when it mattered most.

They comprehensively defeated Pakistan 7-4 in a must-win Pool A match to storm into the semi-finals of the men's hockey event in the Commonwealth Games,  at the packed Major Dhyan Chand National stadium, on Sunday.

Drag-flicker Sandeep (3rd, 11th minute) was the star performer, converting two penalty-corners and then setting up another for Shivendra (19th, 59th).

Sandeep was exemplary in defence too, coming to India's rescue on numerous occasions.

Sarwanjit Singh (20th), Danish Mujataba (41st) and Dharamvir Singh (45th) too chipped in with a goal each in the high-scoring electrifying encounter.

For Pakistan, Muhammad Imran scored from a penalty stroke while Muhammad Rizwan (29th) and Shakeel Abbasi (68th) reduced the margin through field strikes. Muhammad Irfan (58th) too registered his name in the scoresheet, scoring from a penalty-corner.

India to face England in semis 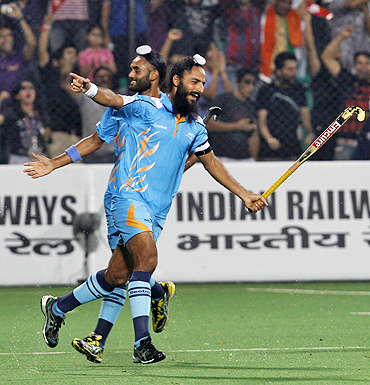 India will now take on Pool B toppers England in the semi-finals on Tuesday while World champions Australia face New Zealand in the other last-four match.

Pakistan, meanwhile, will face South Africa for the fifth-sixth classification match on Tuesday.

India displayed fast-paced hockey from the outset, with their mid-field and forward line combining well to set up the goals.

Pakistan had their share of chances but India's juggernaut proved too much for the Zeeshan Ashraf-led side. 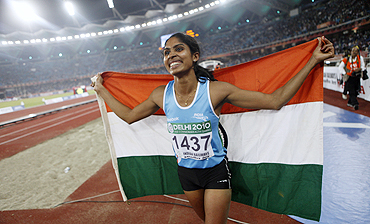 India's Woman long jumper Prajusha Maliakkal missed the gold by a whisker and did well enough to clinch silver at the track and field event on Sunday.

Women long jumper Malliakkal Prajusha was pipped to the post for gold by Canadian Alice Falaiya who leapt 6.50m in her sixth and last jump to emerge winner ahead of the Indian who finished second with 6.47m.

"In my last two jumps my left calf was tight. That affected my performance. But I am not disppointed as I gave my best. I thought I would win the gold but could not at the end. I thank the crowd for their support," she said later.

Before Prajusha's feat, Vikas Gowda won a silver in men's discus throw as India enjoyed their best day in athletics on the fifth day of the competition.

United States-based Gowda, who also holds the national record of 64.96m, finished second with a throw of 63.69m, his season's best. Australia's Benn Harradine, the season's leader among Commonwealth discus throwers, won gold by clearing a distance of 65.45m while Carl Myerscough bagged bronze the with an effort of 60.64m.

With the two silver medals on Saturday, India have bagged four medals in athletics so far in the Delhi Games with Kavita Raut (women's 10,000m race) and Harminder Singh (men's 20km walk race) having already won a bronze each.

Sushil pins down Barnes for gold 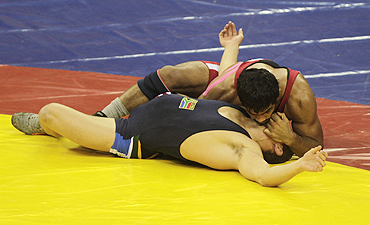 World champion Sushil Kumar added another feather to his cap, winning a gold medal in the men's 66kg freestyle wrestling at the 2010 Commonwealth Games, on Sunday. He beat South Africa's Heinrich Barnes for the yellow metal.

Sushil went on the attack from the start and raced to 2-0 lead before pinning down his opponent. His gold effort came without losing a single point in the tournament.

The next title bout was a high-voltage affair between India's Anuj Kumar and Inam Muhammad of Pakistan, in the freestyle 84kg category.

Canada's Arjan Bhullar then got the better of Joginder Kumar in the 120kg freestyle with a pin down in the second period to clinch the gold medal.

Incidentally, Bhullar's father wrestled in India before immigrating to Canada.

Indian shooters continued their awe-inspiring run at the Commonwealth Games as they clinched one gold medal, a silver and bronze on Sunday.

In a one-two finish for the hosts, Harpreet and Vijay Kumar clinched the gold and silver medals respectively in the 25-metre range, thus continuing their medal-winning spree in the Games.

Manavijit Singh Sandhu then capped off the day by winning a bronze in men's singles trap, finishing ahead of Australia's Adam Vella in the tie-shoot.

There was, however, disappointment for women shooters Suma Shirur and Kavitha Yadav as they failed to finish among the top three in 10m air rifle singles. They had won bronze in the pairs event on Saturday.

Harpreet shot 580 (288 in precision and 292 in rapid stage) to clinch his second gold of the Games, the first coming in the pairs event in which he partnered Vijay. Vijay bagged the silver after prevailing in a shoot-off in which four shooters -- Australia's Michelangelo Giustiniano, England's Michael Gault, Singapore's Meng Lip Poh and Vijay were tied for second spot at 574 points.

Vijay scored 49 out of a possible 50 in the shoot-off, just one point better than bronze medallist Poh. 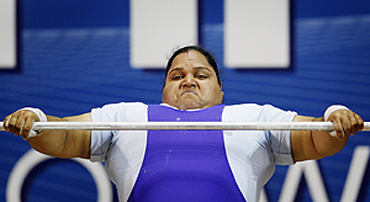 Defending champion Geeta Rani failed to live up to expectations as he finished a disappointing fourth in the women's 75+kg category in the weightlifting event of the Commonwealth Games in New Delhi on Sunday.

Geeta Rani, who won the gold in the same weight category four years ago in Melbourne, cut a sorry figure before her opponents -- Ele Opeloge of Samoa, who bagged the gold, silver medal winner Maryam Usman of Nigeria and Australia's Deborah Acason (bronze).

Opeloge created new Commonwealth Games records in almost all categories (snatch, clean and jerk and total) during the course of the competition.

With a combined lift of 285kg (125kg in snatch and 160kg in clean and jerk), the 25-year-old Samoan bettered her own record in this category. 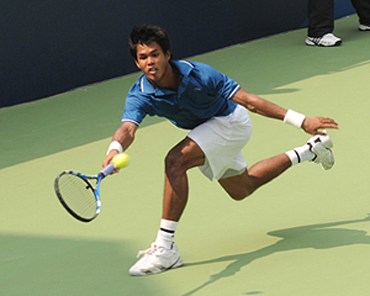 "People underestimate how tough it is to get a gold medal. I worked really hard this week. I am really happy," Somdev said after the match.

"It has been one of the best things in my career for sure to win a gold medal in front of this kind of crowd," he added. 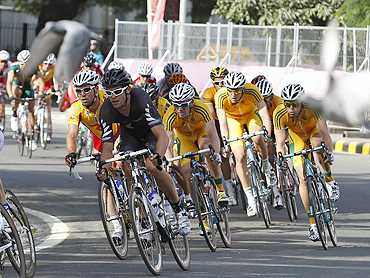 The men's 168km race turned out to be a nerve-wracking one as world championship bronze medallist Davis sneaked home ahead of the rest which included pre-race favourite Mark Cavendish of Isle of Man who ended up a poor seventh.

Davis crossed the finish line near the Parliament triumphant in 3 hours, 49 minutes and 48 seconds in the race held on Central Delhi streets on 13.7-km circuit.

"I didn't know what to do. Cam (teammate Cameron Meyer) wasn't with me and Cavendish was behind me, so I really had to use my brains to make it work and I did," said Davis after his win.