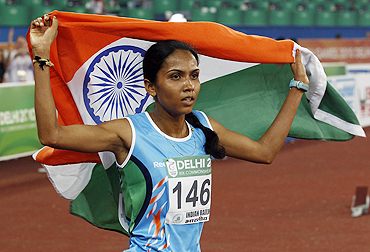 Kavita Raut on Friday became the first Indian woman to win an individual medal in track events at the Commonwealth Games when she bagged the bronze in the 10,000m at the Jawaharlal Nehru stadium.

Before her feat, the women's 4x400m relay team had won a silver in track events fours ago in Melbourne.

Incidentally, this is only the 10th medal for India in athletics in the history of the Commonwealth Games. 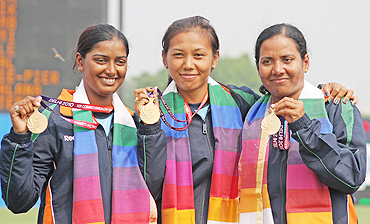 The Indian women's recurve team of Dola Banerjee, Bombayala Devi Laishram and Deepika Kumari fought back brilliantly to cut a four-point lead and rally past their English opponents in the final round to clinch the gold medal.

The top-seed Indian men's team of Rahul Banerjee, Tarundeep Rai and Jayanta Talukdar were stunned by the Aussie trio of Matthew Gray, Mat Masonwells and Taylor 211-216 in the semi-finals.

But they made amends in the bronze play-off, beating England 221-218 for a podium finish.

Gagan Narang on a roll 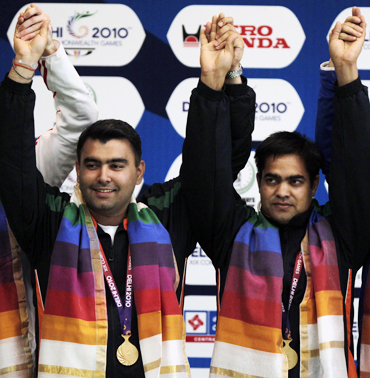 Malaysia's Amir Hasan, who won the silver medal, was a distant second with a tally of 760.3 while Gurpreet Singh won the bronze with 758.7. 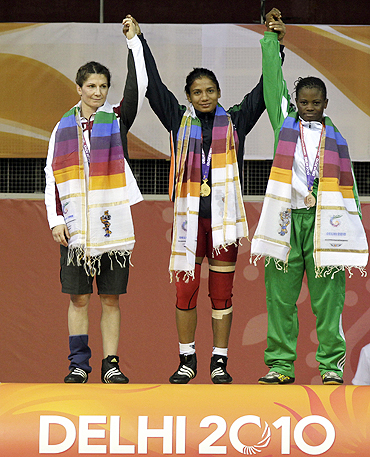 India's top woman wrestler Alka Tomar and young Anita won gold medals in the 59 kg and 67 kg freestyle categories respectively to make it a memorable day for the hosts.

With Geeta winning India's first gold in woman's wrestling on Thursday, Alka and Anita made it a hat-trick of gold medals.

While Alka outclassed Tonya Verbeek of Canada, Anita beat Megan Budyens of Canada, winning the first two rounds on points for a 4-0 win. 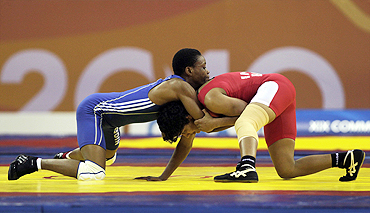 India got another medal courtesy Babita Kumari on Friday, who lost her 51 kg freestyle bout against Ifeoma Christi Nwoye of Nigeria 4-6.

Meanwhile, in gymnastics, Ashish Kumar continued from where he left off on Thursday. He bettered his showing, winning silver in the vault category of artistic gymnastics. 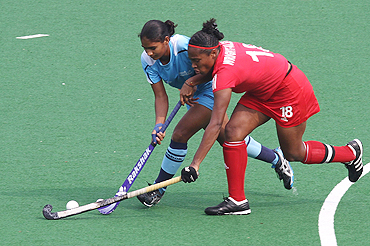 Captain Surinder Kaur scored four goals as India thrashed a hapless Trinidad and Tobago 7-0 in a pool A match to stay in the hunt for a semi-final spot in the women's hockey event.

Surinder fired home in the eighth, 30th, 37th and 54th minute while Ritu Rani (13th), Rani Rampal (34th) and Jasjeet Kaur Handa (68th) were the other goal-scorers for India.