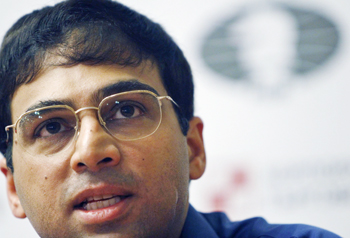 The Indian ace achieved an improbable win playing with black in the final game to retain the title by a 6.5-5.5 margin after the end of the 12th and final round.

Experts over the world had predicted that Topalov, at his worst, will draw the last game under normal time control and take the match to the rapid tie-breaker.

However, it was not to be, as Topalov, trying to look for complications, went haywire in a slightly difficult position and could not recover as Anand kept dealing one lethal blow after another to notch his fourth world title in 11 years and remain the undisputed king of the game.

Anand reserved his best for last 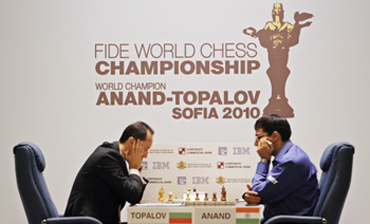 Earlier, in 2008 he won the world title in a match against Russian Vladimir Kramnik; in 2006 he won the World Championship match tournament ahead of almost all top players in the world and in 2000 he won the championship when it was held on a knock-out basis.

Vladimir Kramnik can also lay his claims for that but for the fact that the match he won against Garry Kasparov in 2000 was not played under the official FIDE flag.

If the 12 game was any indication, Anand had indeed reserved his best for last, as he knew Topalov would go all out for a win.

The reason for Topalov's unwarranted aggression was probably based on the fact that Anand is by far regarded the best rapid chess player in history and Topalov does not have any great reputation in the faster version of the game.

Naturally, the Bulgaria wanted to avoid the tie-breaker.

Anand went back to the basics 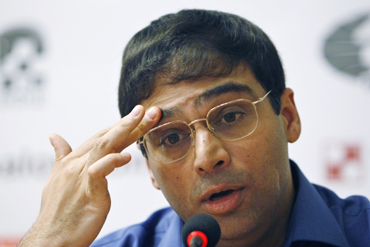 Anand came up with another opening surprise as he went back to the basics.

The Queen's Gambit declined as black has a solid reputation and it stood up for Anand's quest as the Indian ace went for the rock-solid Lasker variation.

Topalov, tried to create complications earlier but when the game headed towards a perfect balance, the Bulgarian lost his cool.

The decisive moment of the game came on the 32nd move when Topalov simply lost his cool and blundered.

For once the home support did not matter 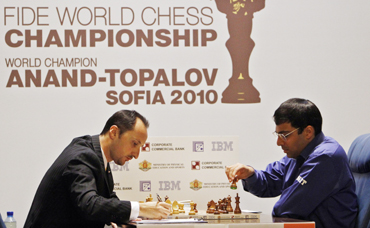 What followed was a feast for the Indian as he could attack the white king at will. All Anand's pieces, joined the party and threats of checkmate loomed large on Topalov.

For once the support of the home crowd did not matter too.

Anand, apparently, made a mistake on the infamous 40th move but his position was so commanding that it did not spoil his game. Topalov fought on for sometime before giving up as the Indian won in 56 moves.