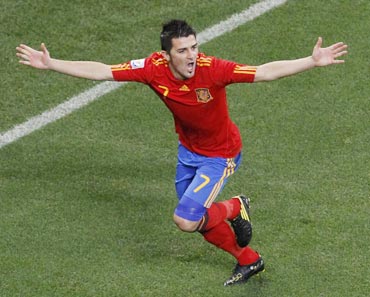 David Villa has found the rich vein of form that can win a World Cup and as long as he continues to mine it, Spain will be quietly confident of adding soccer's biggest prize to their European crown.

Villa's cool finish under pressure against Portugal on Tuesday, his fourth goal of the tournament and his 42nd in 62 appearances, sent Spain through to the last eight to face Paraguay.

It also underscored his status as one of the game's most lethal marksmen and showed how coach Vicente del Bosque has been able to get the most out of Villa in South Africa while some of the world's top forwards have failed to deliver.

Torres had another poor game 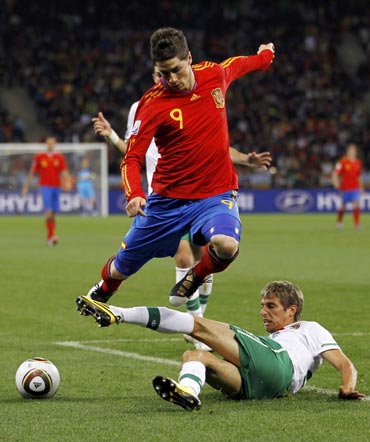 Villa's strike partner Fernando Torres had another poor game at Cape Town's Green Point stadium as Spain beat Portugal 1-0 on Tuesday, while Portugal's former World Player of the Year Cristiano Ronaldo disappeared almost completely in the second half and heads for home with only one goal to his name.

Torres returned from knee surgery shortly before the tournament and looks to be lacking the pace and strength that have made him such a terror for defenders in the past.

Del Bosque withdrew him just over 10 minutes into the second half, and his decision to throw hulking Basque forward Fernando Llorente into the fray proved a masterstroke. 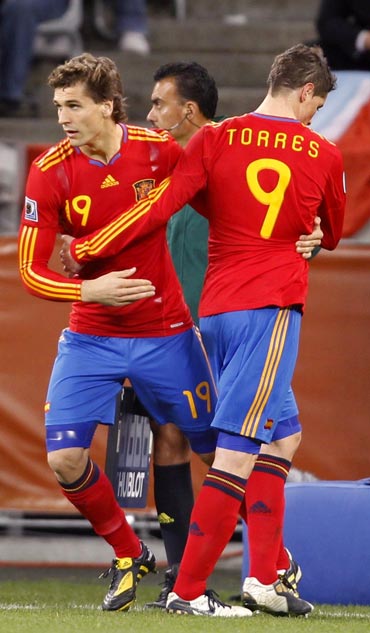 Spain had enjoyed their customary dominance of possession against a defensive-minded Portugal side but lacked ball speed and penetration and central defenders Bruno Alves and Ricardo Carvalho were in firm control.

Llorente made an immediate impact, using his upper body strength and height to hold the pair off, win headers and generally shake things up.

He was involved in the intricate move of short passes that led to Villa's goal and almost scored twice himself. Llorente will be a valuable weapon for Del Bosque to have in reserve against the Paraguayans and beyond.

Villa was the difference maker 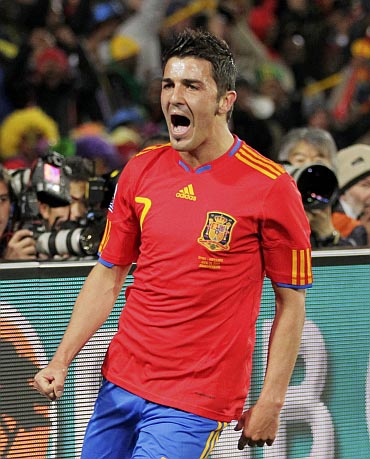 But it was Villa who again made the difference for the Spanish and his goal leaves him only two short of Raul's national scoring record of 44 goal.

He displayed his versatility as his initial, left-foot strike was saved by Eduardo but he had the presence of mind and speed of reaction to switch to his right and fire high into the net with a defender closing him down from behind.

Villa was top scorer at Euro 2008 and did not even play the final due to injury but if Spain clinch a first World Cup triumph on July 11 it will not be a huge surprise if the nippy Asturian nets the crucial goal.