Paraguay crossed a World Cup threshold when they beat Japan on 5-3 penalties to reach the quarter-finals for the first time on Tuesday.

The second round match at Ellis Park ended goalless after extra time and the South Americans netted a perfect five penalties whereas Japan's Yuichi Komano hit the bar with his team's third penalty.

Paraguay go into a last-eight meeting with pre-finals favourites Spain or Portugal having boosted the South American quarter-final tally to four teams including Argentina, Brazil and Uruguay.

'We controlled the ball' 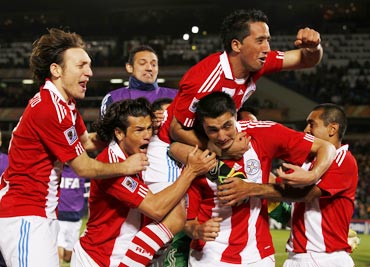 Gerardo Martino's team were marginally stronger than a Japanese side in a tight contest with few chances, and deserved the "moment of glory" the Argentine coach had sought.

"We controlled the ball which is what we wanted," beanpole striker Oscar Cardozo, who netted the match-winning spot kick, told a television interviewer.

Martino added: "To speak of an achievement in getting to the quarter-finals is all right, but to consider this my greatest achievement is, I think, a bit premature.

"It's never nice for a match to be decided in this way but I think we sought (the win) a little more (than Japan)," he told the post-match news conference.

No regrets for Okada The unlucky Japanese will have to wait for another World Cup in their quest to beat South American opposition for the first time in the finals.

"In terms of how we played, I have no regrets. No regrets at all," Japan's coach Takeshi Okada told the post-match news conference.

"The players were wonderful, truly wonderful," he added.

The Japanese were unable to repeat the flowing attacks, which had torn Denmark apart in their group decider though their running into space for each other stretched the Paraguay defence to the limit.

Both teams had their chances 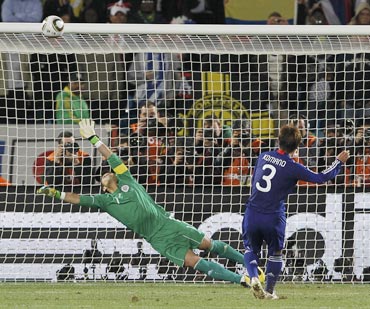 Image: Japan's Komano hits the crossbar during a penalty shootout against Paraguay

The game developed into a contest between Japan's nippiness and Paraguayan possession as the South Americans took the game to their opponents.

At a Paraguay corner on the half hour, Roque Santa Cruz squandered a good chance, hitting a loose ball wide from close in.

Keisuke Honda, who has had a fine tournament leading the Japan attack, saw his 38th minute effort veer away and go out just wide of the post.

Midfielder Edgar Benitez had an effort deflected wide by centre back Yuji Nakazawa seconds before being replaced by striker Nelson Valdez close to the hour mark as Martino sought more penetration.

Both teams put more urgency into their play in extra time and Valdez was denied by Kawashima before substitute midfielder Edgar Barreto shot just over the bar from a goalmouth melee near the end.