'It was great to be back on the pitch' An impressive performance from the returning Arjen Robben helped Netherlands to a comfortable 2-1 win over Slovakia on Monday and put them into the World Cup quarter-finals.

Winger Robben, making his first start in South Africa after suffering a hamstring injury, rifled home a solo effort after 18 minutes to give the Dutch the lead, before Wesley Sneijder wrapped it up six minutes from the end.

Slovakia, who last week sent holders Italy packing with a 3-2 upset, got a consolation with the last kick of the game when Robert Vittek netted from the penalty spot.

"That was nice today. If you're at the World Cup it should be fun. We didn't play our best match today but the important thing is that we advanced," said Robben, adding he had not yet reached his peak form just three weeks after his injury.

"For me personally it was a great experience to be back on the pitch again from the first minute and to be decisive for the team. It was a great feeling if you can do it in the first game, straight away," he added.

Robben is an absolute genius 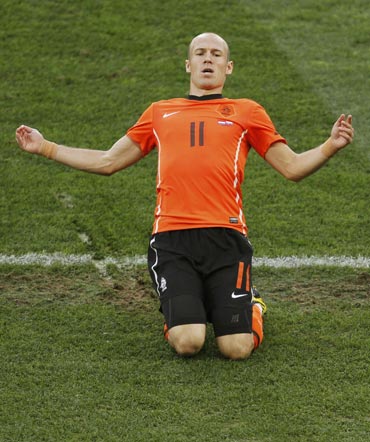 Slovakia's coach Vladimir Weiss said Robben, who missed the Netherlands' first two matches of the campaign because of his injury, had made the difference.

"We were preparing for three days for Robben, for his way of playing but he is an absolute genius," he said.

"He really knows what he is doing. When I saw him in the lineup I knew he would make the Dutch lineup 50 per cent stronger and I was correct," he added.

In his 71 minutes on the pitch, the winger was at the heart of all of the most threatening moves from a Dutch team who had otherwise looked as devoid of flair as they had when grinding out three wins in their group matches.

He scored the first when Sneijder's superb long ball out of defence gave him room to run at the Slovaks, and he sprinted towards goal before cutting inside two defenders outside the penalty area and drilling a left-footed shot into the corner of Jan Mucha's net.

Robben nearly scored a second goal from a similar position at the start of the second half but this time Mucha got a hand to the ball to send it around the post. 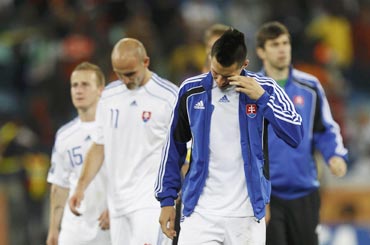 Slovakia did create some good opportunities, but when clear chances fell to Miroslav Stoch and Vittek in the 67th minute, Dutch goalkeeper Maarten Stekelenburg provde equal to them.

The game was as good as over in the 84th minute when, after a quick free, Dirk Kuyt beat Mucha to the ball and he squared to Sneijder to sidefoot into an empty net.

There was still time for a consolation goal for Slovakia when in the third-minute of injury time, Stekelenburg brought down Martin Jakubko and Vittek coolly converted the penalty.

"No coach can be happy if he loses and if he has three high quality chances," Weiss said.

"The penalty at the end will make us feel better during our flight back home," he added.