Silences his critics with a sparkling comeback 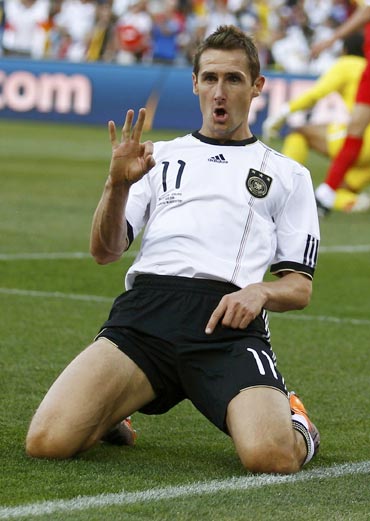 Just a couple of weeks ago Germany's Miroslav Klose was persona non grata among German fans following his trickle of league goals but the striker has silenced his critics with a sparkling comeback.

On Sunday the 32-year-old, who came into the World Cup after what appeared his worst season in years with just three league goals for Bayern Munich, could finally crack a smile.

Pushing team-mate and double goal scorer Thomas Mueller aside and telling him "you've said enough", Klose, who had also just scored in their 4-1 demolition of England to steer Germany into the quarter-finals, was in high spirits.

He had just netted his 50th international goal -- his second in this tournament -- on his 99th appearance and could not hide his satisfaction.

"No, I did not want to show anyone anything. I just wanted to prove it to myself," he said of Germany's first goal, when he sprinted past two England defender to slot the ball home. 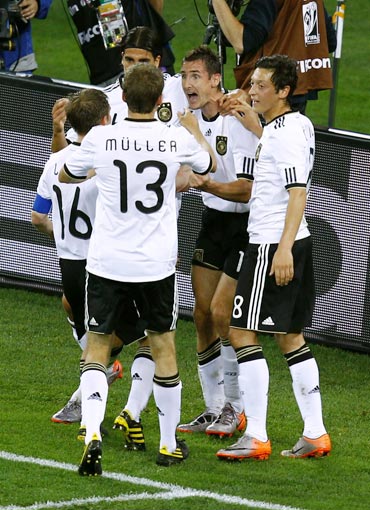 Only days ago he had been sent off in their Group D defeat by Serbia and had to sit out Germany's narrow 1-0 win over Ghana that sent them through the group stage.

The discussion as to whether he was too old had again kicked off back home.

"I was just happy that the team won against Ghana and I could play against England," he said after scoring what was his 12th World Cup goal.

The Poland-born striker is now level with Pele on the all-time World Cup scorers list, just three behind top scorer Ronaldo on 15.

'Playing for Germany was a dream' 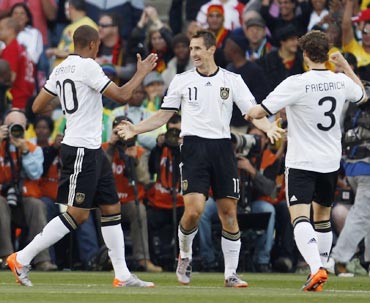 "Back then when I was a kid it was a dream to have such a record, of scoring at every second Germany game I play. Even just playing in the national team was a dream back then," he said with a dry smile.

The soft-spoken Klose is lying in ninth place in the list of Germany's most-capped players, behind such illustrious players as Franz Beckenbauer, Gerd Mueller and Juergen Klinsmann.

He has now won one more cap than captain Michael Ballack, who missed the World Cup through injury.

On Germany's all-time scorers list he is in third place, with Mueller on top with 68 goals.

Klose confident of a good show against Argentina 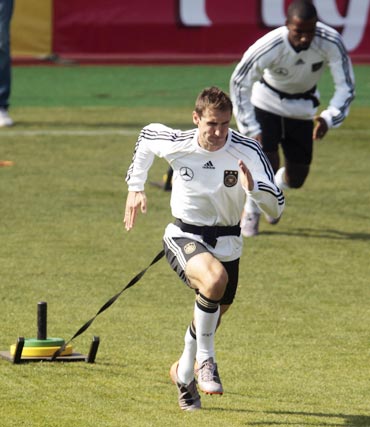 He will most take his international appearances to 100 when Germany face Argentina for a spot in the semi-finals.

"There is still a lot that is possible here and it would be a mistake to start asking ourselves how far we can go," he said.

"But if we play the game like we played it today then we will go far. We can apply it against any opponent," he added.

After such a turnaround who would dare bet against him.