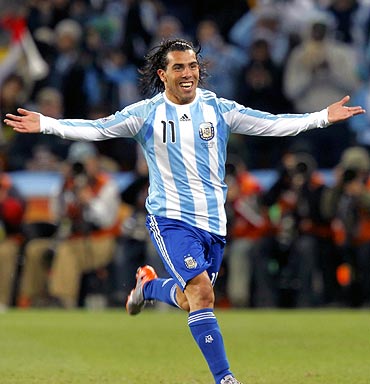 Carlos Tevez scored two goals, one controversial and the other brilliant, in a 3-1 win over Mexico that swept Argentina towards a classic World Cup quarter-final with great rivals Germany on Sunday.

Argentina face the Germans, who had earlier eliminated England 4-1 with the help of another controversial refereeing decision, for the second successive finals having lost to them on penalties in their 2006 quarter-final in Berlin. 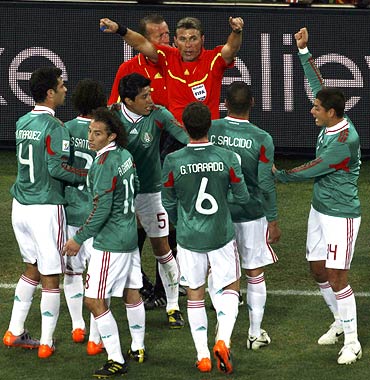 Tevez opened the scoring after his low effort was blocked by goalkeeper Oscar Perez. Lionel Messi chipped the rebound to his fellow forward who had strayed into an offside position and headed the ball into the net.

The Mexicans protested the decision and Italian referee Roberto Rosetti ran over to consult his assistant linesman, who was surrounded by irate players, before confirming the goal. There was a heated exchange between the teams' two benches over the issue after the halftime whistle. 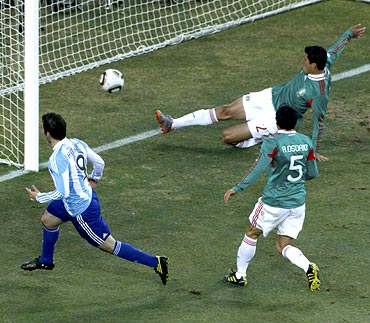 Mexico defender Ricardo Osorio clumsily lost control of the ball as he was bringing it out of defence and Gonzalo Higuain pounced to round Perez and put Argentina two up.

Higuain's fourth goal of the tournament put him top of the goalscoring list.

'Diego asked me to play up front more' 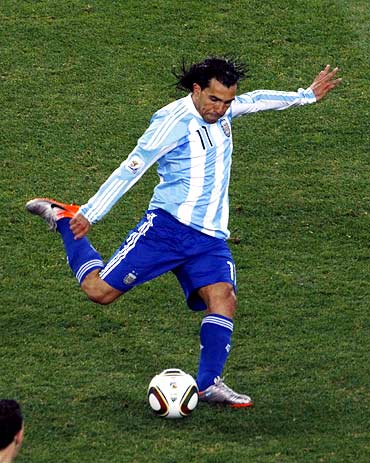 Tevez put the match beyond the Mexicans seven minutes into the second half with a drive from 25 metres into the top corner of goalkeeper Oscar Perez's net, a wonder goal to match Maxi Rodriguez's winner in Argentina's 2-1 extra-time victory over the same opponents at the same stage in 2006.

"Diego asked me to play up front more, to drop back to help defend when it was right, but to be more of a striker," Tevez, voted man of the match, said. 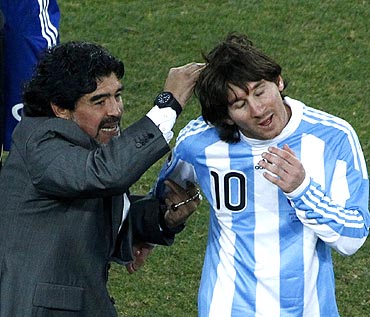 Diego Maradona kept a packed media room waiting about 20 minutes before arriving in triumph, literally in a puff of smoke, to josh with reporters and even dedicate the win to the MotoGP world champion Valentino Rossi.

The former soccer great had ambled into the room sucking on a newly lit, enormous cigar but was swiftly told to put it out. From then on, though, Maradona held court.

"It's great to be part and parcel of these players and the team. I feel proud I am sharing this moment," he said before questions turned to their quarter-final clash with Germany on Saturday in Cape Town.

"I would like to dedicate this match to my friend Valentino Rossi who got himself injured," the 1986 World Cup winning captain added.