England, USA make it to Round of 16 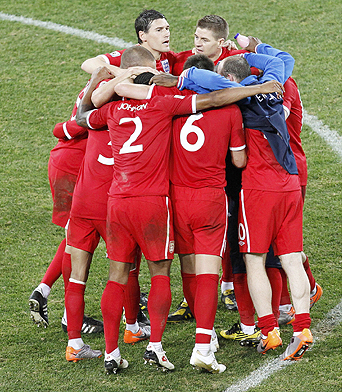 Jermain Defoe's opening half goal helped England scrape past Slovenia 1-0 and enter the knockout stage of the FIFA World Cup here today after securing the runners-up spot in Group C.

The impressive Slovenes, however, crashed out of the tournament after the United States scored a late-winner over Algeria to secure the took top spot in the group.

Starting in place of misfiring Emile Heskey, Defoe turned out to be England's unlikely hero when he found the match-winning goal in the 23rd minute.

England started the game on a positive note and enjoyed better ball possession and sparkled with sharp passes.

But Slovenia had the first shot on goal, probably their best chance in the opening half, when midfielder Valter Birsa's drive in the seventh minute was saved by English goalkeeper David James.

Defoe scored the only goal 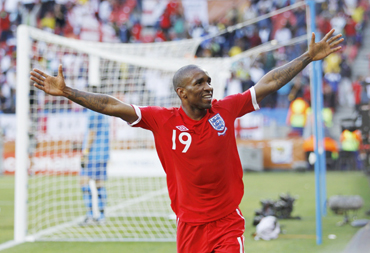 Thereafter, England took the control of the proceedings slowly and steadily with off-colour Wayne Rooney raising upto  the occasion with some tentalising runs through the middle.

But it was Defoe who responded to his coach Capello's call by superbly slotting home the ball past Slovenia keeper Samir Handanovic from a James Milner curling cross from the right wing to give England the lead.

England could have doubled their lead four minutes later but for Frank Lampard, who shot over.

In almost an identical move, Milner crossed from the right which Handanovic, somehow, managed to keep away from Defoe's feet, only to find an unmarked Lampard outside the box, who shot the ball way over the bar.

Handanovic again came to his side's rescue minutes later when he made a double save off Defoe and Gerrard to keep Slovenia in the fray.

The change of ends, however, made the game more open as both the sides went for quick short passes in their quest to break the rival defence.

Defoe had a golden chance to make it a double just three minutes into the second half but he clipped the ball just wide of the target off a Rooney corner with Slovenia custodian Handanovic beaten all ends up. 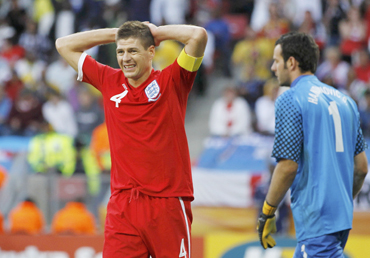 Handanovic then denied John Terry in the 55th minute, stopping the Chelsea defender's open header from a Gareth Barry corner.

In between Birsa hit a free-kick on target which English goalkeeper James saved easily.

Minutes later, Rooney came tentalisingly close of breaking his goal drought, only to be denied by the wood work before Capelo replaced him with Joe Cole.

Slovenia, however, gave England a scare in the 67th minute when Milivoje Novakovic, substitute Ziatko Dedic and Birsa's quickfire shots were blocked by Terry, Johnson and James.

England came into the match with two points from as many outings, having drawn both their earlier encounters against the United States (1-1) and Algeria (0-0).

Donovan got the vital U.S. winner 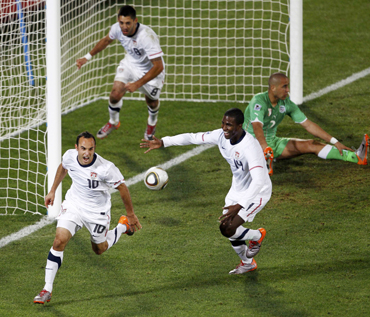 Meanwhile, the United States scored a last-gasp winner to beat Algeria and qualify for the last 16 of the World Cup after a pulsating and even match in which both sides had plenty of chances.

Landon Donovan got the vital U.S. winner in the second minute of injury time.

The Group C match had its first chance within 12 seconds, but Karim Ziani's volley from outside the penalty box flew just wide of Tim Howard's goal.

Algeria came close again in the sixth minute with another volley, Rafik Djebbour taking advantage of a mistake by defender Jay DeMerit to send his shot crashing against the bar.

The Americans responded just moments later with a powerful drive by striker Hercules Gomez forcing keeper Rais Ouheb Mbouli to palm away for a corner. The United States had a goal disallowed late in their 2-2 draw with Slovenia and were frustrated again when Clint Dempsey's 20th minute tap in from a Gomez assist was judged offside.

Dempsey threatened again on 57 minutes when a Jozy Altidore cross fell to him near the penalty spot, but his curling shot hit the post.

Seven minutes later the United States pushed forward once more when Benny Feilhaber, who came on at halftime for Gomez, put in a dangerous cross which forced Mbouli to a reflex save with his outstretched leg.

The United States looked the more dangerous side, but the Algerians gave them occasional scares such as Hassan Yebda's 68th minute fierce strike that went wide after a flowing counter-attack.