US to rejig midfield for Algeria decider 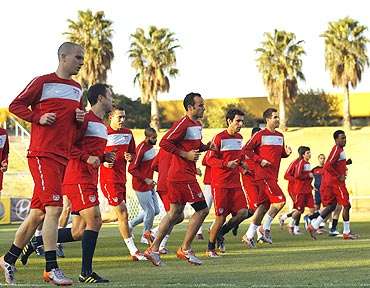 Image: Players of the US team go through the paces at a training session
Photographs: Reuters

The United States are likely to restructure their midfield once again as they head into Wednesday's final Group C match with Algeria knowing they must win to guarantee reaching the World Cup second round.

US coach Bob Bradley will be without suspended striker Robbie Findley and is expected to bring in Edson Buddle in attack alongside Jozy Altidore.

But Bradley is also likely to field a different midfield for the third successive match as he searches for a way to end a frustrating habit of conceding early goals.

Jose Torres replaced Ricardo Clark against Slovenia but that did not work well as Michael Bradley was left with too much defensive work on his own and the US trailed 2-0 at the break.

Edu brings a more physical presence to the centre of midfield and frees up his partner to make more forward runs, such as those that led to him equalising against Slovenia. 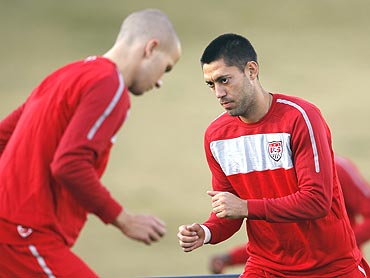 Image: US midfielders Clint Dempsey (right) and Michael Bradley go through the grind during a training session

Coach Bradley, who gives few clues about his likely team, indicated he wants to see much more of the aggressive, pressing style his team showed after the break against Slovenia.

"In the second half of the game when we had got to push the game, I felt that the work of the whole team, the work of the midfielders, to push, close down, try and win the ball back was really good. Those were all positives," he said.

"As you get ready for Algeria you look hard to see what that game will be like and now you assess where we are as a team with injuries, fitness and fatigue and make decisions," he said.

Another option for Bradley would be to bring in Stuart Holden on the right flank, play Landon Donovan on the left and ask Clint Dempsey to move up front alongside Altidore.

Although Dempsey has stated he is happiest on the left, where he can cut in onto his right-foot, he can be effective as a second striker and Holden's crossing ability could be crucial with two big strikers to aim for in the area.

We proved ourselves against England: Yahia 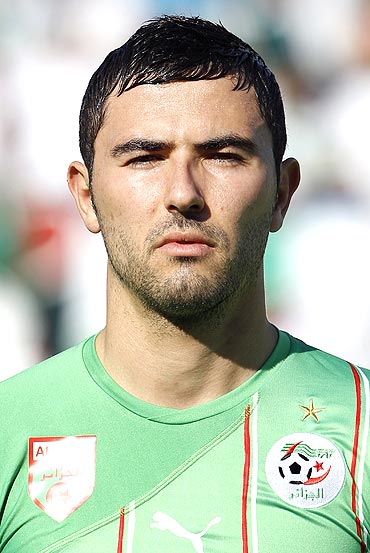 Algeria showed, though, in their 1-0 defeat by Slovenia and their goalless draw with England that they are a team who can defend with tenacity and then threaten on the break.

"It shows even when you have a talented attacking team like England, when you play against a team that's organised, with numbers behind the ball, then breaking them down, making the right play, and getting a goal is still not always easy," said Bradley.

Algeria skipper Antar Yahia said his team needed to deliver a repeat of their display against England if they were to defeat the Americans and give themselves a chance of advancing.

"Against England we proved ourselves to be up to the task and we even had chances to win the game. We showed the best of ourselves and that's how we'll need to play against the United States to win and qualify for the last sixteen".