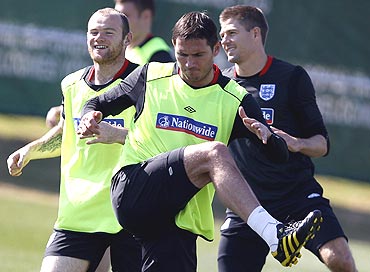 England's World Cup campaign is in tatters with crisis meetings, furious fans, misfiring strikers and splits in the camp and a win against Slovenia on Wednesday is their only hope of salvation.

In less than two weeks, England have gone from talented contenders to sulking underachievers, presenting unfashionable newcomers Slovenia with a chance to top the standings and revel in the sinking their famous Group C rivals.

Slovenia, who failed to reached the second round on their debut as an independent nation in 2002, lead the group on four points followed by the United States and England on two and Algeria, who play the US in Pretoria, with one.

Typically, the England camp insists all is well, the players are united and fully behind their coach Fabio Capello, but the worst-kept secret is that the Italian's team selection and strict adherence to a 4-4-2 formation is troubling the squad.

'We are fully behind Capello' 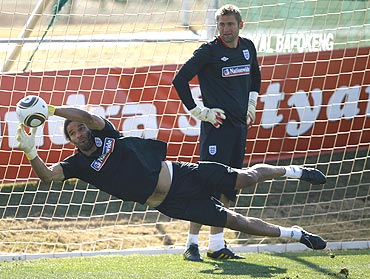 Whether the no-nonsense Capello cares what his players think remains to be seen but he has promised changes to an uninspiring side packed with in-form players who have shone in the Premier League but struggled in an England shirt.

Midfielder Frank Lampard was the first to admit it.

"We have to play (here) with that pace and passion that we have every week at home," he said.

Defender John Terry spoke like the captain he no longer is in his efforts to show the team was united, determined and that the cloud hanging over them would soon pass.

"We're here supporting and fully behind (Capello) and have his support as well," Terry said. "That's the main thing and we just have to stick together and get that win and stay unified.

Capello keeps his cards close to his chest but could move captain Steven Gerrard into an attacking role in support of troubled striker Wayne Rooney, with Joe Cole brought into the midfield to replace misfiring marksman Emile Heskey.

Jamie Carragher, who came in for the injured Ledley King, misses the game through suspension and will be replaced by Matthew Upson in the centre of defence. 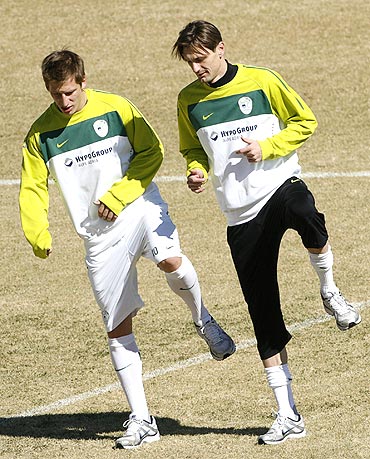 Image: Slovenia's Valter Birsa (left) and Milivoje Novakovic go through the paces at a training session

Slovenia are the unexpected leaders of a group that was regarded as the weakest of the eight. They are on the verge of making the second round at a major tournament for the first time after early exits from Euro 2000 and the 2002 World Cup.

But the Slovenia team has its own troubles to contend with and have lost forward Nejc Pecnik, who fractured his ankle in the 2-2 draw with the US having come on in the second half.

Defender Marko Suler is also doubtful after heavily bruising his ribs in a physical battle with US striker Jozy Altidore.

Coach Matjaz Kek is again likely to field a 4-4-2 formation with Milivoje Novakovic and Zlatan Ljubijankic up front, while Valter Birsa and Andraz Kirm should operate on either flank.