Sign in  |  Create a Rediffmail account
Rediff.com  » Sports » Siddhanta Pinto brings us the frenzy of the World Cup from Ground Zero 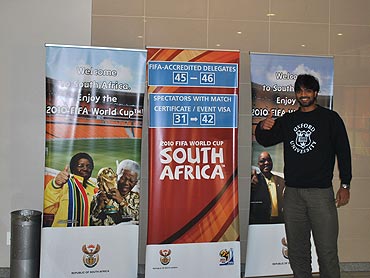 What more reassurance could I ask for -- my flight of fancy was on the right flight path.

On landing in Johannesburg, the signage is all around you. I had to wait a full 5 minutes to get this image as every single person off the flight took this picture. 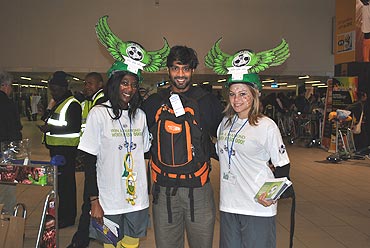 The signage takes on a human touch.

Carnival at the terminal 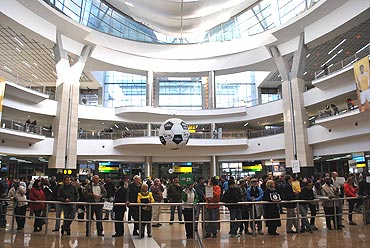 The scene at the arrival -- Vuvuzelas ring in the air, and fans from various countries compete raucously with their cheers. 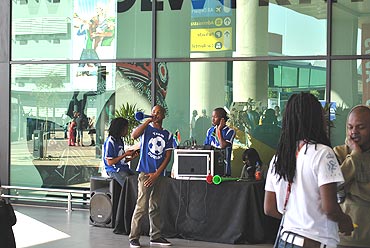 Durban airport. I print out my match tickets and walk out to find dancers, welcome staff playing football, and a DJ spinning party music at noon.

We drive towards the resort town of Umhlanga (pronounced am-shlaang-aa). It is the holiday destination in Durban, famous for watching dolphins, but most famous for celeb spotting.

We decided to rush there because we were tipped off that the Greek team was at the Beverly Hills Hotel. 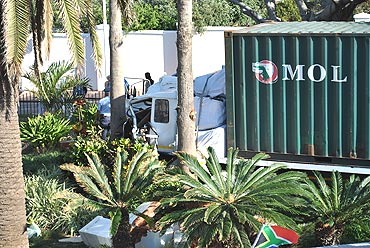 We reach the hotel to see the approach road cordoned off by intense police activity. With the possibility of a scoop, my heart starts beating faster.

But it slows down equally fast when we find out it has nothing to do with football.

A truck has crashed right through the hotel's front wall, stopped by a tree before it caused more damage.

The driver is lucky to survive. And so is the Greek team.

Who is Moses Mabhida? 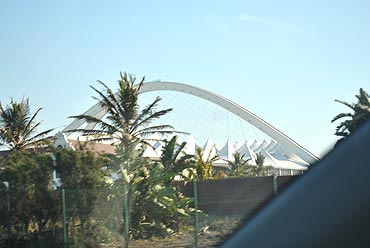 My first view of the Moses Mabhida stadium. The arch can be seen from a long distance away.

I ask locals who Moses Mabhida was. They shrug. "Most of our roads and structures are named after politicians we dont know about," says one local. Mr Mabhida was apparently a leader of the African National Congress. 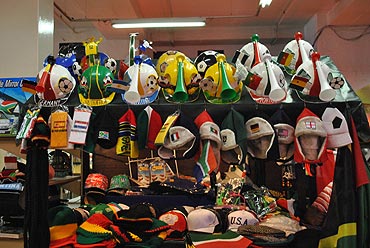 Colour, vuvuzelas and the famous helmets can be found everywhere. 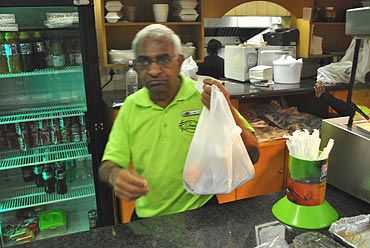 Image: A shopkeeper hand me my Bunny Chow

My first meal in Durban has to be the famous Durban bunny chow. A hollowed out loaf of bread, that is used as the dish's container, filled with a curry that involves no milk at all, it tastes quite Indian, full of masala.

"What's your flavour?" is a question often asked in South Africa. It translates to 'What do you prefer?' Choices this time involved Beans Bunny Chow, Chicken Bunny Chow, and Mutton Bunny Chow. Sumptuous stuff!

At the gates of the stadium 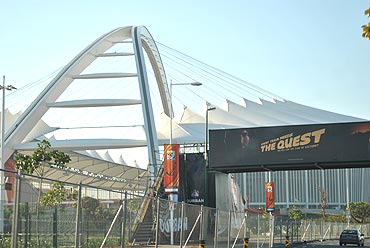 I will be inside this stadium today as Nigeria take on South Korea. It is a must win game for the Asians. 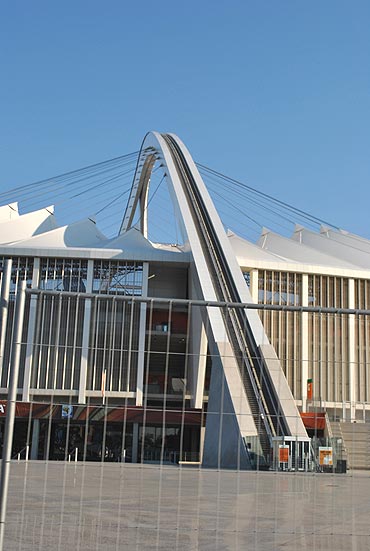 Image: The cable cars above the Moses Mabhida stadium

The famous cable car ride up the arch of the Moses Mabhida stadium is sadly shut for security reasons during the duration of the World Cup. There are also 550 steps you may climb up to the top.

Durban is not all pretty 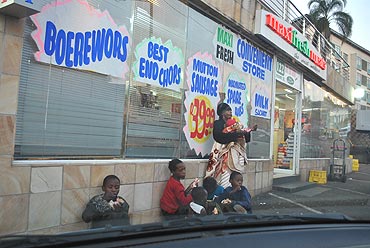 Image: Poor folk at a street corner in Durban

It's not all pretty.

I am told these groups of poor folk, asking for help, are not necessarily related to each other.

Some have fancy houses, some live comfortably, but there are lots who suffer in genuine poverty.

Durban has no night life 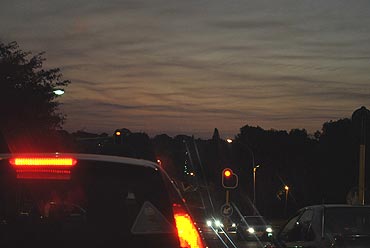 Image: The night sky in Durban

It's winter in South Africa which means it gets dark around 5.15 pm.

Surprisingly, there isn't much of a night life. But more of that later.

Tuesday's going to be a LONG day. I go to the famous beachfront fan park to experience the scenes as Bafana Bafana take on France. And then walk across to the Moses Mabhida for the first live World Cup game of my life.

Wait a minute, the only other proper stadium I've watched a football game in is Delhi's Ambedkar stadium as India won the Nehru Cup. Then again there's my beloved Cooperage stadium in Mumbai. But this -- this is Huge.