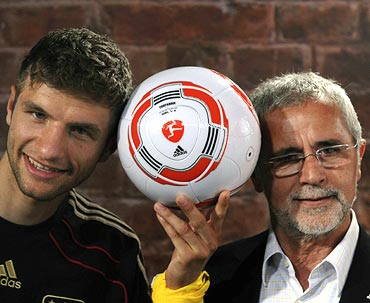 Germany's Thomas Mueller is on track to becoming his country's next big striker despite his young age, his namesake and Germany's most prolific goal scorer of all time Gerd Mueller said on Tuesday.

The 20-year-old Bayern Munich striker, whose meteoric rise from the third division only 14 months ago to the World Cup, reads like a fairytale, scored Germany's third goal in their Group D 4-0 demolition of Australia on Sunday.

"He is just a fantastic player. He can play on the left, on the right, he is good in the air. He is 'Mister Goal' for me," Gerd Mueller, whose stunning 68 goals in 62 appearances for Germany put him at the top of their scorers' list, said in an interview.

'He has everything a striker needs' 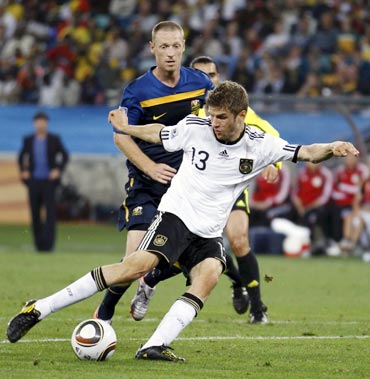 Short, slim and with his once black beard turned grey, the bespectacled 64-year-old Mueller is known as the 'nation's bomber' for his amazing scoring ability that saw him net a record 365 Bundesliga goals in 427 games.

He also long held the record for most World Cup goals with 14.

Yet he was unreserved in his praise for Thomas, whom he knows from the Bayern youth team he helps train.

"He has everything a striker needs and if he stays without injury he will go a very long way. Plus he is a good boy," Mueller said with a hint of surprise that people still recognised him.

'I have not realised this giant leap' 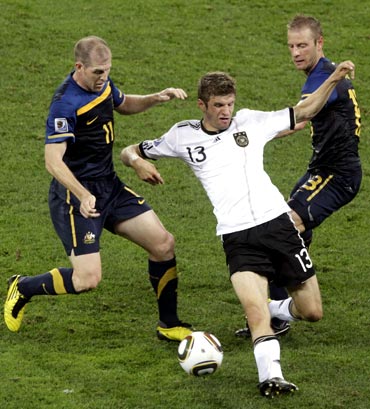 The younger Mueller, part of the domestic double-winning Bayern team in only his first full season and who also played in their losing Champions League final against Inter Milan, is unfazed by the sudden burst of publicity.

"To be honest I had no time to think about this development," said Thomas Mueller, who netted 13 times in the league this past season.

"I have lived through every day of this progress and it is not like I played in the third division a year ago, took a year out and suddenly am at the World Cup," Thomas, wearing shorts on a bitterly cold day at their Erasmia training camp outside Pretoria, told reporters.

"So I have not realised this giant leap. Maybe when I retire I can think about and say what a great leap it was. But this is my first year and I intend to play many more years of high quality soccer." 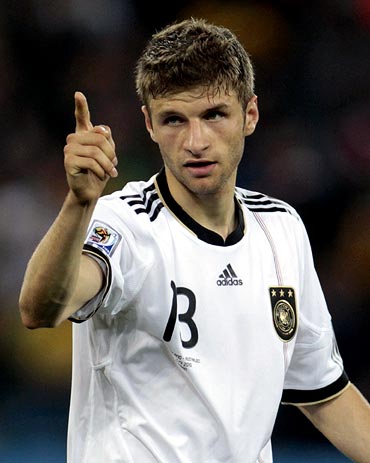 Thomas also wears the number 13 strip for Germany just like the older Mueller did.

"Senior players had first pick of shirt numbers so I was left with numbers 13, 14 and 4. I just could not resist picking that," Thomas, who has only won three caps so far, said.

"I know Gerd Mueller from the Bayern amateurs and of course we have a connection through our name (no relation), although we are a bit different," Thomas said.

"But when you get praise from someone who has scored 365 goals it is quite important. I do not think I can reach that number but I will try to get as close to that as possible."

"Yes he did that turn, didn't he?" Gerd Mueller said. "He has done that many times though. But he could go into his opponents a bit harder," he added, grinning.