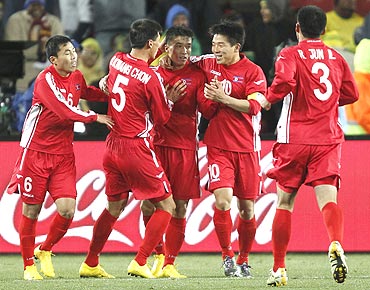 In the end there was no fairytale return to the World Cup finals for North Korea but the Asian side can hold their heads high after a 2-1 defeat to Brazil in their Group G opener at Ellis Park on Tuesday.

While Brazil dominated possession and were clearly the better side throughout, the North were by no means disgraced in their first appearance at the finals since reaching the last eight in England 44 years ago.

In a performance that was more gritty than pretty, North Korea held the five-times world champions goalless in the first half before two defensive lapses saw them fall 2-0 behind midway through the second before a stunning consolation effort brought some cheer.

'We are not disappointed' 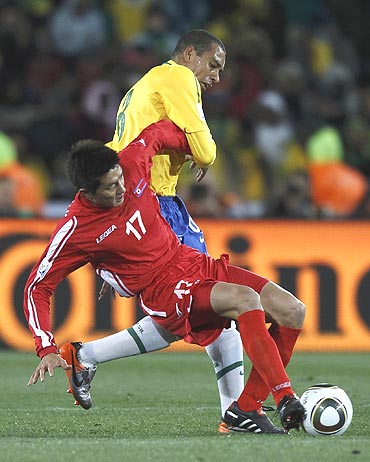 While the result left North Korea at the bottom of Group G, midfielder An Yong-hak said his team-mates were anything but downbeat.

"The mood in the dressing room is fine, we're not disappointed because we still have hope," he said after the game.

"We know we did very well against a strong team like Brazil and we said to ourselves 'let's just keep it going in the other two games'.

"Portugal and Ivory Coast will be strong opponents but we're going to do better against them."

In a stadium bathed in Brazilian gold and green, tiny pockets of red-clad fans waved flags and cheered every North Korean tackle, corner and throw-in as Brazil struggled to breach their sturdy defence in the first half.

'I was very proud of the players' 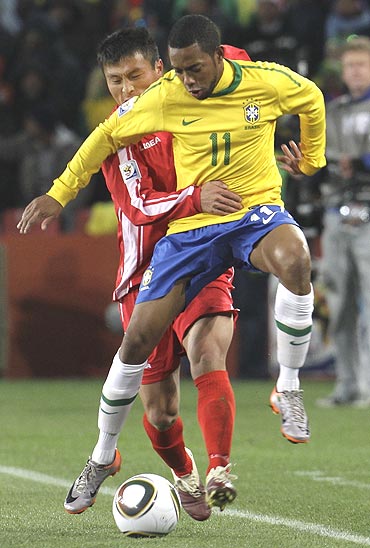 Brazil committed more men forward after the break and took the lead through Maicon in the 55th minute before Elano made it 2-0 17 minutes later.

"As a coach, when one of my players scores a goal against such a strong team as Brazil, well, it was something I was very happy with," the coach said.

"Our ultimate objective was to win but I was happy because regardless of the result we played well and scored a goal. I was very proud of the players."