Robinho: King of the Stepovers 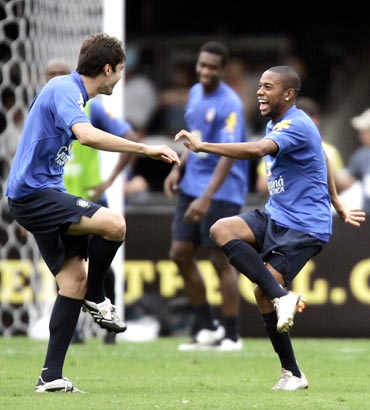 His international career, however, could hardly be more different. When in the yellow shirt of Brazil, Robinho has been reliability personified, never complaining and always feeling at home.

One of the few players who performs better for his country than club, the King of the Stepovers has been almost ever-present for Brazil in the four years Dunga has been coach.

His only moan since Brazil arrived in South Africa is that his team mates cannot follow his goal celebrations.

"There are a lot of stiff waists in the team -- Kaka, Luis Fabuloso," he said. "I want to see if they can dance a little better."

Robinho burst onto the scene as an 18-year-old 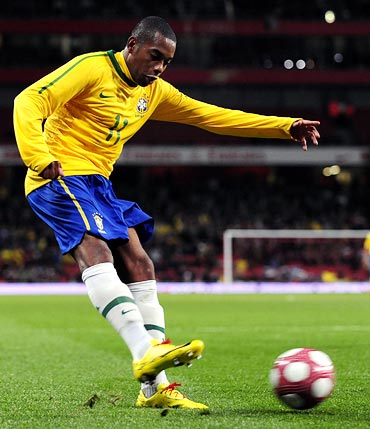 Robinho burst onto the scene as an 18-year-old with Santos in 2002 when his precocious dribbling helped them win the Brazilian championship.

One of the most replayed moments of his career came in the final against Corinthians when he performed seven stepovers before provoking a defender into giving away a penalty.

But he fell out with Santos three years later when they initially refused to sell him to Real Madrid. Robinho boycotted training sessions in protest before the move finally went through.

His three seasons with Real ended in a similar fashion, an unsavoury transfer saga finally landing him at Manchester City rather than Chelsea, the team he had publicly stated he had wanted to join.

Despite scoring plenty of goals for City, Robinho never seemed happy in England and at one stage was fined for walking out on a training camp in the Canary Islands. 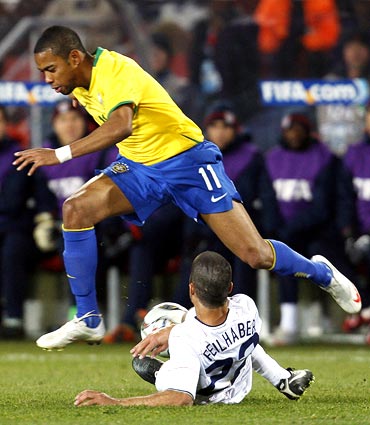 At the start of this year, he was loaned back to Santos and, despite clearly enjoying himself on his return home, is now in the middle of yet more speculation about his club future, with Turkey's Besiktas appearing a possible buyer.

Yet, while all this has been going on, Robinho's international career has flourished.

He was top scorer with six goals when Brazil won the Copa America three years ago and has also won two Confederations Cup medals with his country.

He played in 15 of Brazil's 18 World Cup qualifiers, missing only the last three when the team had already qualified. Still only 26, he has already played 73 internationals, scoring an impressive 25 goals.

Even when playing for Brazil there is still something of a "moleque" -- which roughly translates as naughty schoolboy -- about him. After a 3-0 win in Chile, he admitted daubing a message to his hosts on the dressing-room wall.

It read: "There must be respect for the best team in the world."

'Robinho can stand out in world football' 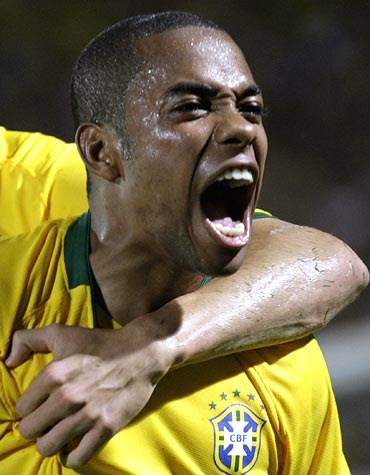 Robinho has looked sharp in Brazil's warm-up matches, scoring once in the 3-0 win in Zimbabwe and twice in the 5-1 demolition of Tanzania.

One of only four forwards in their 23-man squad, he is also one of the few capable of unlocking a defence with a moment of individual inspiration.

Former striker Tostao said that the World Cup is a chance for Robinho to finally fulfil the potential he has shown in flashes throughout his career but which he has been unable to produce on a consistent basis.

"Robinho has given signs that he can shine in the World Cup and stand out in world football," said Tostao in his newspaper column.

"With the exception of Robinho, the Brazilian team today has very little individual inspiration," he wrote. "But Robinho has always had talent."