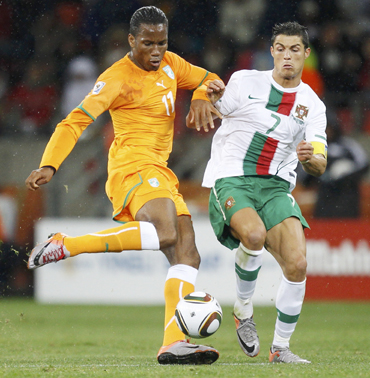 A spirited Ivory Coast ran the Portugal defence ragged before settling for a goalless draw against the 2006 semi-finalists in their Group G match of the FIFA World Cup in Port Elizabeth on Tuesday.

In a match that saw Portugal captain Cristiano Ronaldo squandering perhaps the easiest chance of the encounter and talismanic Ivory Coast striker Didier Drogba making a late appearance with his arm in a protective cast, the African team dominated much of the proceedings even though they lacked the finish to break the stalemate.

The match saw some tooth-and-nail battle in the initial minutes when both the teams tried to make early inroads. Although each of them came close to secure the early lead once during the keenly-contested first half, none of them could really break the stalemate. 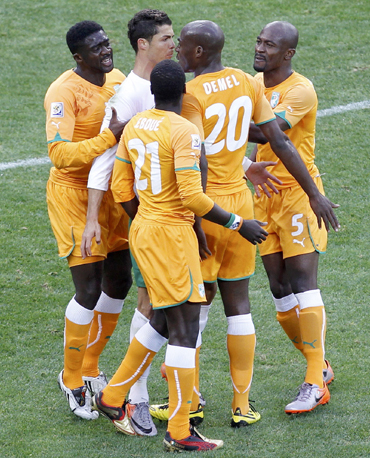 Portugal got the best opportunity to surge ahead in the 11th minute when skipper Ronaldo was left unmarked by the Ivory Coast defenders but the Real Madrid star's powerful strike from 25-meter closely missed the left post.

In the return attack, Ivory Coast organised a swift move but Cheick Tiote's shot went over the bar in the 17th minute.

There was some heated moment as well and referee Jorge Larrionda showed yellow card to defender Guy Demel for a foul on Ronaldo, who also got a caution due to his on-field exchange of words with Demel.

Drogba came in for Kalou Drogba, who is recovering from a right-arm injury suffered in a World Cup warm-up match, did not play in the first 45 minutes with defender Kolo Toure leading Ivory Coast, the last of the six countries to qualify for the FIFA World Cup finals.

The battle only intensified after the change of sides and with Drogba's entry, the Ivory Coast forwardline intruded into the opponent citadel on a number of occasions but Portugal defenders stood firm to deny them any success.

It started drizzling towards the end and Portugal got a couple of free-kicks but their shots could hardly test the opponent custodian's skill.

After 13 matches the net has bulged just 20 times 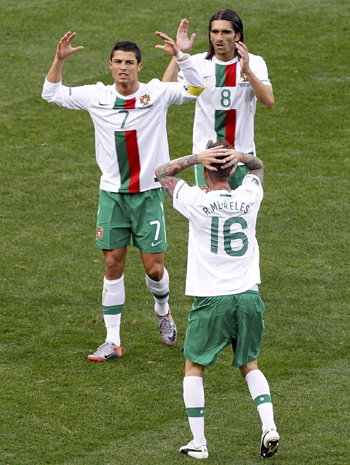 During the injury time, Ivory Coast strikers, led by Drogba, put up last-ditch efforts to break the deadlock.

However, the Portugal defenders stood between them and a goal and Drogba missed a chance when he, instead of taking a shot himself with just the goalkeeper to beat, passed the ball even though none of his teammates were in position.

Neither the globe's most expensive soccer player nor one of its most prolific marksmen were able on Tuesday to remedy a worrying shortage of goals at Africa's first World Cup.

Both 80 million pounds ($123.7 million) striker Cristiano Ronaldo and goal machine Didier Drogba drew blanks when Portugal and Ivory Coast played out a goalless Group G encounter to add to the paucity of goals in South Africa so far.

'I thought our team should have won' 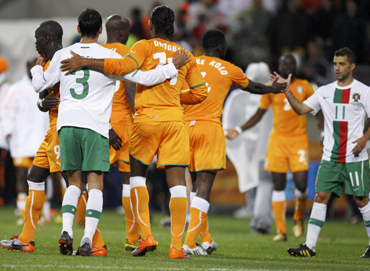 Image: Portugal and Ivory Coast players greet each other at the end of a 2010 World Cup Group G soccer match in Port Elizabeth

The draw will boost the confidence of the Ivory Coast, which enjoyed most of the possession and always looked dangerous with smooth passing and plenty of energy going forward.

"I thought our team should have won. It was us who had more chances, I think we were organised all 90 minutes. It's a point, it would be better with three, but we played well and handled it well," Ivory Coast coach Sven Goran Eriksson told reporters.

"Both teams played like they didn't want to take big chances and lose. If you start to attack frantically against Portugal, they will kill you," he added.

The mood in the Portuguese camp was less upbeat.

"Of course, we're disappointed. We needed this win and we had chances to win. It's our first game, we're nervous, we're anxious. We knew it was an important game, but we need to focus on the next one now," midfielder Deco said.