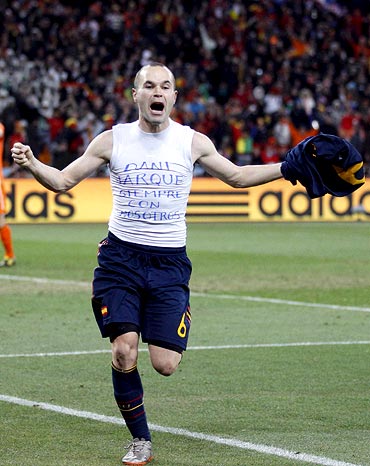 In the face of tough Dutch opposition, Spain were unable to produce the eye-pleasing soccer that has been the hallmark of their rise to the pinnacle of the game but kept their cool to take their first World Cup title with yet another 1-0 win.

Those who hoped for an exhibition of fine movement and intricate passing in the World Cup final will have been left disappointed by a poor and largely scrappy game which was decided by an Andres Iniesta goal four minutes from the end of extra-time.

A tournament which had offered some glimpses of genius and moments of magic, but not the level of excitement that many would have desired, truly needed a final full of the best of the game.

Instead, however, spectators witnessed a stream of fouls, 47 in total, some rough, others purely disruptive and an astonishing 13 yellow cards and one red. 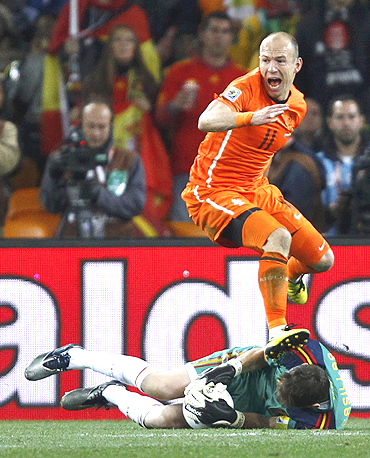 Image: Netherlands' Arjen Robben looks back at referee Howard Webb as Spain's goalkeeper Iker Casillas dives to make a save

Despite the pedigree of the teams there was little of the quality football for which both countries have been noted for many years.

Tiredness on both sides led to a more open extra-time with chances for both teams, before Iniesta's strike but there was no coming together of Spanish 'Tiki-Taka' possession football and Dutch flair.

Some of the blame for the poor spectacle can be put on the nerves that accompany such an occasion, particularly understandable in the case of a Spain side playing in their first World Cup decider and a Dutch team keen to avoid their nation's third defeat in a final.

The Dutch were getting physical 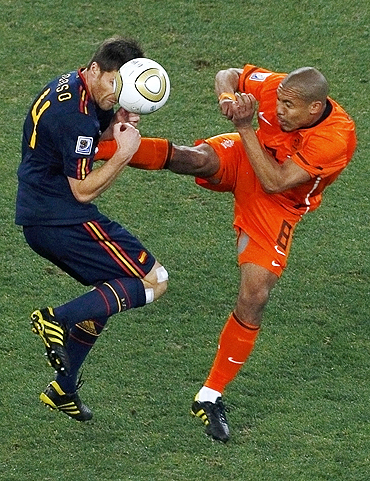 Image: Spain's Xabi Alonso gets a boot in his chest as he is challenged by Dutch Nigel de Jong

But the Dutch strategy, particularly in the first half, of getting physical with the Spaniards also contributed to the disappointing entertainment.

It was an approach which resulted in eight of the Netherlands starting line-up receiving yellow cards from English referee Howard Webb.

The tough tackling and fouls worked, however. They unsettled Spain and stopped them getting the grip on possession that they enjoy so much and which has been the foundation for the success in the past three years.

The neutral may have been unimpressed but Netherlands coach Bert van Marwijk had clearly learned the lesson from Germany's defeat to the Spanish in the semi-final stage.

The Dutch battled with Spain in midfield 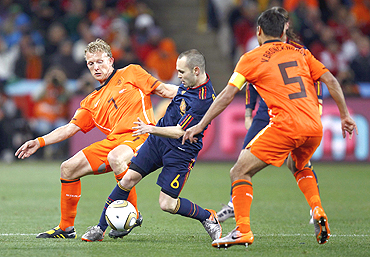 The Germans, hoping to play Spain on the counter-attack sat back and allowed Xavi and company to play 'keep ball' in midfield with the result that they had been unable to find their own rhythm or any sort of way to threaten the Spanish defence.

The Dutch preferred a battle for control in midfield, banking on the rugged Mark van Bommel and Nigel De Jong to impose themselves and allow Arjen Robben on the right and Dirk Kuyt on the left to exploit any space that emerged.

In the end it turned out to be defence-splitting passes through the middle that opened up Spain the best in the second half - both times Robben racing through but being foiled firstly by the legs of Spain keeper Iker Casillas and then failing to finish after he appeared to be pulled back by Carles Puyol. 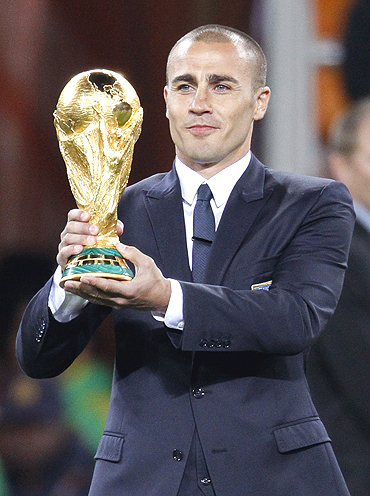 Image: Fabio Cannavaro of Italy, captain of the 2006 World Cup winning team, holds up the trophy before the World Cup final on Sunday

Spain were unable to get the tempo up to the beats per minute that they need to be truly effective until the introduction of substitute Jesus Navas on the hour in place of forward Pedro.

David Villa and Sergio Ramos both had good chances in the latter stages to win the game for Spain while at the other end Robben's breakaway from Puyol could have settled it for the Dutch.

Extra-time came and it seemed penalties would follow before Iniesta, the player who had shown the most individual flair throughout, struck the winner.

Spain deserve credit for keeping their cool in the face of the Dutch aggression and showing the patience and faith in their ability that has been present throughout this tournament with their narrow 1-0 wins in all their knockout stage games against Portugal, Paraguay and Germany.

A single goal again proved to be enough and despite the lack of sparkle in the showcase game few, bar the Dutch left furious with the referee, would begrudge the Spaniards their long awaited crown.