'Football for Hope' aims to make the world a better place 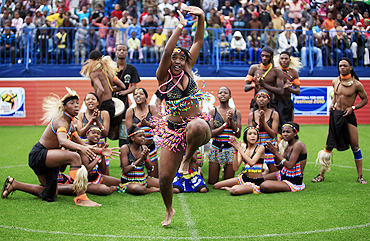 The World Cup is not the only soccer tournament reaching its climax in Johannesburg this weekend.

Just a few miles from Soccer City, where Spain take on the Netherlands on Sunday night in a match that will be watched by tens of millions of people across the globe, another final will take place in very different circumstances.

It will be staged in Alexandra, one of the city's poorest townships and a hotbed of protest during the apartheid years in South Africa.

Amid the corrugated iron shacks and slum housing, where the young Nelson Mandela once lived, two groups of teenagers will face off in the deciding match of "Football for Hope", a five-a-side tournament running alongside the World Cup.

Just as at the World Cup, 32 teams have taken part in the tournament in recent weeks.

But rather than playing for their countries, the players here are representing community groups from around the world that have one thing in common - they all use football, in one way or another, to try to make the world a better place.

So, for example, there is a delegation from Cambodia that encourages children to play football, and then - once it has their attention - teaches them about the danger of land mines.

Other delegations have come from within Africa, where they use football to bring kids together and educate them about HIV and AIDS.

"The Peace Team" is from Israel and Palestine, and includes players from both communities. Other teams have come from Ireland and the Balkans, where they use football to unite children and heal sectarian and ethnic divisions.

'It's been an amazing shared experience' 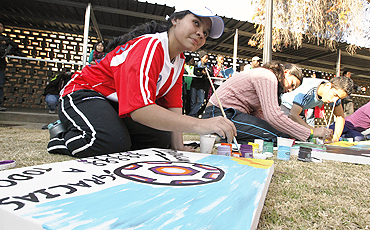 The tournament has been organised by soccer's global governing body FIFA and by streetfootballworld - a non-profit making organisation based in Germany. FIFA said it had ploughed $3 million into the tournament.

Talk to the teenagers involved, and it is clear that "Football for Hope" offers them a wonderful opportunity.

They get to come to the World Cup, see something of South Africa, meet other kids from around the world and, of course, play football.

"It has been an amazing shared experience, meeting people from all sorts of other countries and cultures," said Andrea Del Rio, an 18-year-old player from Chile.

"We've been able to see a bit of Alexandra too. The poverty here is unbelievable, I think it's made us all appreciate how lucky we are."

But what is the lasting legacy of the tournament? What has it done for Alexandra, home to 750,000 desperately poor South Africans?

World soccer's governing body FIFA, along with its partners, has modernised a local school that has been used to house the 400 tournament participants, he points out.

Once the tournament ends, the organisers will hand out much of the IT hardware used here -laptops and mobile phones - to the delegations to take home with them. The rest will stay in Alexandra for local use.

"Of the 320 volunteers who have worked at the tournament, 60 percent come from the local community and have got training," Tiger said. "They don't just walk away with a uniform, they walk away with basic services skills."

The programme uses football as a force for good 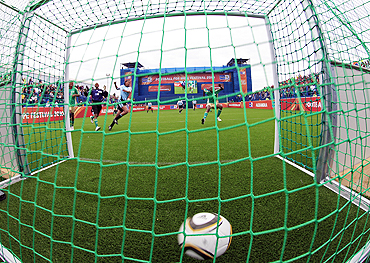 After this weekend, the tournament venue will be dismantled but FIFA will leave the synthetic pitch in place in Alexandra.

A community centre will be built alongside it - part of FIFA's commitment to help build 20 "Football for Hope Centres" across Africa. Each centre will have an artificial pitch alongside health and education facilities.

This is the first time FIFA and streetfootballworld have staged a tournament like this alongside a World Cup but they say it could become a feature of all future tournaments.

"The delegation we have here from Brazil is already excited because they will be our hosts next time," Tiger said. "We're planning for 2014 already."

Meanwhile, the 32 delegations here will go back to their local communities and continue their work at a grass roots level - using football as a force for good, in the hope it will bring about much-needed social change.