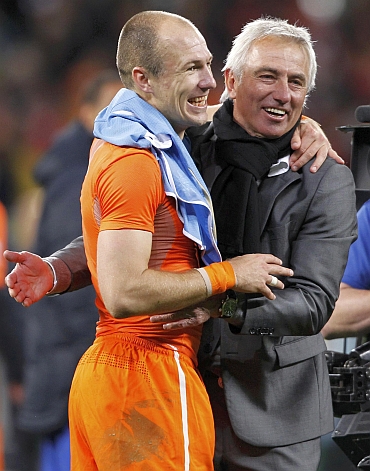 Netherlands coach Bert van Marwijk's biggest gamble was keeping an injured Arjen Robben in his World Cup squad and it paid off handsomely after the winger recovered in time to help steer the Dutch to the final.

Robben suffered a hamstring injury six days before the start of the tournament and did not join the squad that travelled to South Africa on June 5 but stayed home for intensive treatment.

He was able to join his team-mates just a week later and was deemed fit enough to make his first appearance of the tournament in their final group match against Cameroon on June 24.

'Arjen has something others don't have' 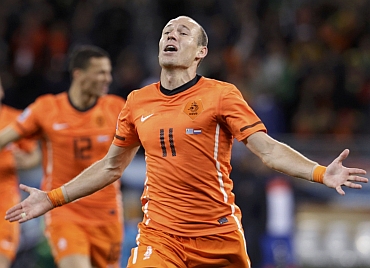 Van Marwijk explained that the prognosis for Robben's recovery looked so much better the morning after the injury that the coach was willing to risk keeping him in the squad.

His decision had widespread support among all the players.

"With his own style and qualities Arjen has something others don't have," striker Robin van Persie said.

Robben's introduction in the second half against Cameroon proved decisive when he curled a left-foot shot against the post and Klaas-Jan Huntelaar netted the rebound to secure a 2-1 win.

It's a great experience to be on the pitch again 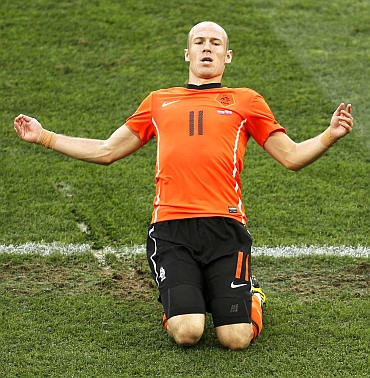 Robben made his first start at the finals in the second round game with Slovakia and needed just 18 minutes to reward Van Marwik's patience when he cut in from the right flank to put the Dutch ahead with a well-placed shot from 20 metres.

"It was a great experience to be on the pitch again from the first minute and to be decisive for the team, it's a great feeling," he said after a 2-1 win put them in the last eight.

Robben did not play his best against Brazil but was still involved in both goals, scored by Wesley Sneijder, and tormented the opposing defence so often that Felipe Melo stamped on him in frustration and was sent off with his side trailing 2-1.

Robben netted his second goal in the semi-final against Uruguay when he headed home a fine cross from Dirk Kuyt to make it 3-1 three minutes after being involved in the attack that resulted in Sneijder putting the Dutch ahead. They won 3-2.

With the artful Robben drawing most attention from opposing defences, the Dutch have been able to focus on the teamwork that has taken them back to Soccer City -- where they began against Denmark on June 14 -- to face Spain in Sunday's final.

Robben may have missed the start of the campaign but he has made sure he will have a big role to play at the finish.