World Cup Sid on why Forlan should win Golden Ball 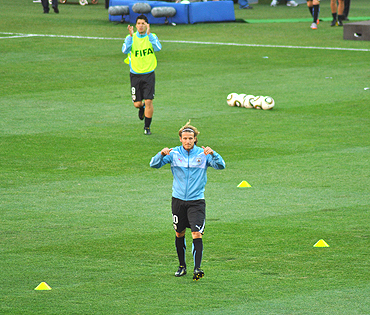 Image: Diego Forlan acknowledges the crowd as he warms up before the South Korea match
Photographs: Siddhanta Pinto

Why doesn't the world of football talk enough about Diego Forlan? For World Cup Sid, Forlan is the player of the tournament or the winner of the Golden Ball award for the 2010 FIFA World Cup, a prize that I read Wesley Sneider and David Villa are in the running for.

I had the pleasure of watching him live from a few metres away on June 26 in Port Elizabeth at the Nelson Mandela Bay stadium when Uruguay took on South Korea in the first round of 16 knock-out game of the tournament. Clearly there was a favourite, not only amongst the Uruguayan fans but also amongst the South Korean fans as Diego Forlan jogged onto the pitch nonchalantly after all other players had for his warm up routine. If you were present to hear the cheers, you'd know what I was talking about. He had to acknowledge us, as we cheered away lustily, and those are the photographs you see.

Unfortunately, that particular game will go down as a Luis Suarez starrer, the forward getting both goals, and both excellent ones. But that is on paper; those present noticed and understood the presence and quality of the player who also almost single-handedly won Athletico Madrid their latest UEFA cup title.

He has mastered the Jabulani 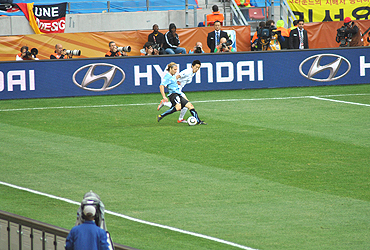 There are various other reasons that I can think of for awarding the Golden Ball to Diego Forlan. Some are sweeping statements - such as Diego Forlan took a country with a population of hardly 3-4 million to the semi-final of the FIFA World Cup, some are personal observations - such as there is no other player who has mastered the Jabulani as much as Diego Forlan has.

If you watch closely, you'll see him cocking his foot back in the middle of his follow through after giving it a mighty thump, which visually looks more like a side foot caress. I can find an analogy in how the kids in my building spin their hand held tops - the ones they painstakingly tie a thread around in circular motions. When they release the top, with a flourish of the arm - and I'm talking about the pros, you'll notice they pull back at the final moment, to give the top that most important spin. It is a critical, subtle little movement of stopping the follow through -something that Diego Forlan has mastered in a short while, something that the world's biggest stars haven't, ballooning their strikes well above the crossbar.

He is a man with great character 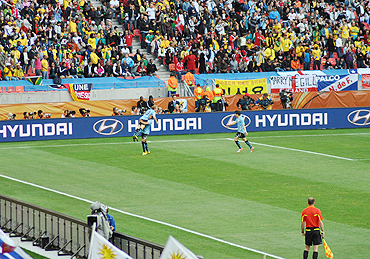 Image: Forlan's teammates hoist him after a goal-scoring move against Korea

During that match against South Korea, there was another striking moment. As Suarez scored the opening goal, a tap in at the right of goal to a brilliant cross from Forlan from the left, after he shook off 4 defenders, I noticed at least 3-4 Uruguayan players rush to Forlan and not the goal scorer, and hoist him. They knew who's goal it was, they knew who was making the difference, with no disrespect intended to Suarez.

Above all though, if I were to think about it, I think it is the character of the man. Someone who despite his goal-scoring prowess and having the spotlight and cameras trained on him, appears to be shy. Someone who looks at his boots as he walks off the field while the world looks at him and cheers, someone whose goal celebrations are modest in comparison to others, and someone who has never been heard to say much outside the football field.

He is a model to the youth out there. A footballer who knows his craft, improves at it everyday, and knows when he steps off the field that it is just a game.

'Where has this guy come from' 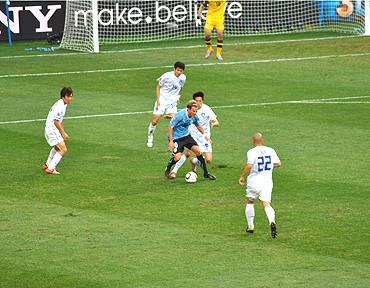 My female friends squeal in delight when the man takes off his shirt, and as a guy you cannot help but notice just how fit he is. Ironically it was his fitness that came in for some flak during those days at Manchester United, and how hard he worked at it as he moved to the Spanish League, and rose from strength to strength.

As Uruguay take on Germany on Saturday and play for pride, I'm not going to claim that it will be a Forlan special again. I will instead ask you to notice the man. His poise, his effectiveness, his hard work, and hopefully his mastery over the Jabulani.

I cannot help but smile when I hear some nouveau football fans discuss amongst themselves, "Hey WHERE has this guy come from .never heard of him before "

It's proof enough, the best possible proof, that the FIFA World Cup 2010 wasn't about the Wayne Rooneys, the Lionel Messis, the Cristiano Ronaldos or the Fernando Torreses. It was about an Uruguayan, whose name you will not forget from this day on.