Playoff for third place no sideshow for Uruguay 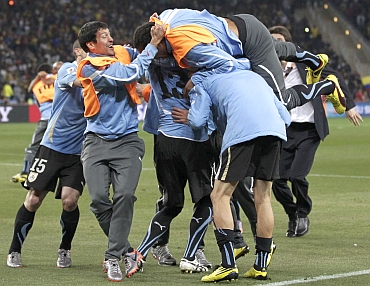 Uruguay will be gunning to beat Germany on Saturday knowing success in the third-place playoff game would mark their best performance at the World Cup finals since they lifted the golden trophy 60 years ago.

The match on the eve of the final seldom sees much enthusiasm from defeated and disappointed players but it has significance for Uruguay and coach Oscar Tabarez said on Friday his players were just as motivated as for their other games.

"It would be history," he said.

"We have in front of us a marvellous opponent. Before the (semi-final) match against Spain they (Germany) were the best team of the tournament and this is very motivating for us. It'll be difficult but not impossible," he added.

On a revenge mission 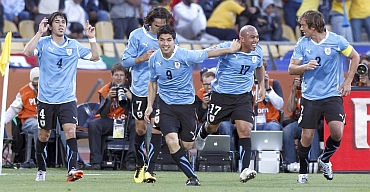 Image: Uruguay team during a match

Uruguay's surprise run to the last four was a stunning achievement given their rocky qualifying road to South Africa.

The twice World Cup winners were the last team to clinch a place at the tournament having survived an exhausting 20-match campaign that included a playoff against Costa Rica.

Uruguay have played in the third-place playoff twice, losing both times, and Tabarez is keen to avenge their 1-0 defeat by Germany in 1970 in Mexico when Uruguay dominated the match.

"It was a special game. I hope we can play as well as then and hope we have better luck than they did, as it was one of the most unfair results in a football match ever," he said.

Their other third-place loss was to Austria in 1954.

Forlan fit for the clash 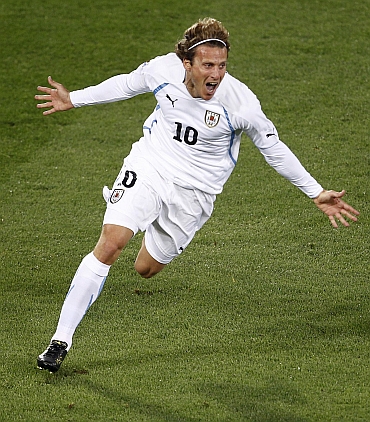 In-form Uruguay marksman Diego Forlan has recovered from an injury sustained in the 3-2 semi-final defeat by Netherlands, Tabarez said, giving him a chance to win the Golden Boot.

Forlan has four goals and trails joint-top scorers David Villa of Spain and Wesley Sneijder of Netherlands by just one.

However, three other candidates will also be chasing the prize on Saturday, with Germany's Thomas Mueller and Miroslav Klose also standing on four goals.

Klose might be the hungrier of the trio as two goals would also take him past former Brazil forward Ronaldo and make the 32-year-old German the record scorer at World Cups.

Tabarez said Forlan's priority would a victory for the team, not his own shot at winning the Golden Boot.

"He's not playing for that," he said. "It's a collective sport and he's the first to say it's about the team," he added.