How the greats fell at Wimbledon Roger Federer's shock exit at Wimbledon forces Bikash Mohapatra to look back at how the greats fell off their perch at the Big W, something that also marked a career decline.

It's now happened three years on the trot.

However, it's only on this occasion that it is so obvious.

Roger Federer's love affair with Wimbledon is in a tumultuous phase.

It was smooth sailing for the Swiss at the All England Club till the 2008 final, with five straight titles in his trophy cabinet and a sixth one on the anvil.

Then someone called Rafael Nadal spoiled the party that year.

Federer had problems with the Spaniard a year earlier as well, but, in the end, won fairly comfortably. There was no encore though.

Nadal had, in his third attempt, done something Federer failed to do in four -- beat the other in his favourite tournament.

The Spaniard's shock exit at Roland Garros the following year and his withdrawal from Wimbledon ensured the Swiss two landmarks: a first ever French Open triumph making him only the fifth player ever to win all the four major titles and a sixth Wimbledon title, which also meant a record 15th major title.

However, in the case of the latter, Federer had to dig deep and use all his previous experience as a shield.

For Andy Roddick, playing in his third Wimbledon final, played what was arguably the best match of his career.

And Tomas Berdych's relatively comfortable win over Federer in the quarter-finals on Wednesday only reiterated the fact.

The Swiss hasn't had even a decent season (he is 31-9), his triumph at the Australia Open notwithstanding considering his lofty standards.

Wimbledon was like a bastion since 2003 (he is 55-6 overall). And it has been breached twice in the last three years, on this occasion well before the deciding clash.

Though writing a career obituary of the Swiss player would still be premature, it would suffice to say Federer is now in the twilight of his career, where results will trickle down and defeats will be more frequent than they ever were.

There are many analogies to the Swiss ace's career progression: players who made their breakthrough at Wimbledon, had significant (if not spectacular) careers and then slowly faded away: with the All England Club being witness to both their rise and fall.

Rediff.com takes a look at a few such players.

The 1981 final proved the Swede too was human 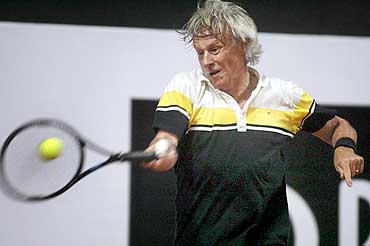 The Swede's love affair with Centre Court started in 1973, when he made it to the quarter-finals in his first attempt.

However, in the said period the Swede had made rapid strides as regards his career, winning amongst others two French Open titles.

And from 1976 onwards, Borg didn't lose at match at the Big W for the next five years, winning five straight titles and 41 straight matches en route.

His loss to John McEnroe in the 1981 final proved that the Swede too was human.

McEnroe's was a considerably long affair 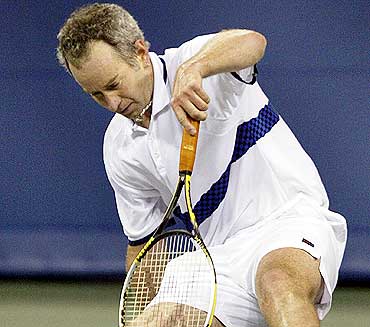 It began in 1977, when as an 18-year-old amateur he made it through the qualifying tournament and into the main draw, eventually losing in the semi-finals to Jimmy Connors -- it was the best performance by a qualifier at a major.

And it ended with defeat at the hands of Andre Agassi in the semi-finals in 1992.

In the intervening period, McEnroe won the tournament on three occasions and made it to the final on two other.

The American's first final came in 1980, when Borg was gunning for his fifth successive title.

The match is best remembered for the fourth-set tie-breaker that lasted 20 minutes, with McEnroe saving five match points before eventually winning 18-16.

However, the American had his revenge a year later and went on to win the coveted trophy again in 1983 and 1984, each triumph marking career ascendancy.

His latter years at the All England Club were exciting. But couldn't ensure him another trophy. 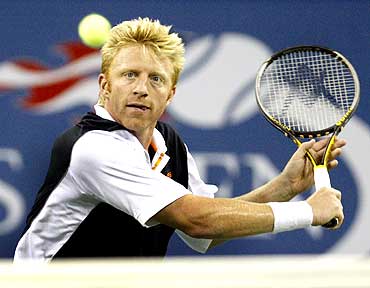 For someone who described the Centre Court as his backyard, success at the Big W came easy for Boris Becker.

Having become the first unseeded player to win the Wimbledon singles title in 1985, the German returned the following year to defend it like a native.

A third triumph on his favoured grass surface came in 1989 by far the best year of Becker's career.

When Becker lost to Pete Sampras in the quarter-finals in 1997, many thought it would be his last appearance at the All England Club considering his career was on the decline.

However, Becker surprised all in 1999, playing at Wimbledon again.

He beat future champion Lleyton Hewitt in the third round before losing to the fourth round to Patrick Rafter.

Some love affairs are eternal. Becker's at the Big W was one such.

Edberg's game was tailor made for the Big W 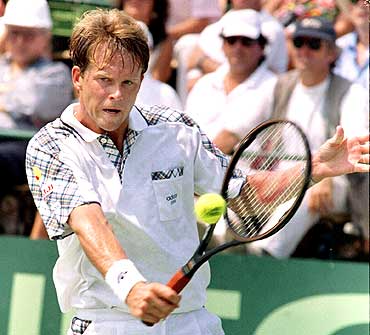 The Swede's game was tailor-made for the grasscourts of the All England Club.

A high, kicking serve, quick reflexes and a killer backhand volley were all the ingredients that a player would have needed to triumph at Wimbledon.

So it hardly came as a surprise when he got his game together and triumphed in 1988.

The Swede would go on to play in the two subsequent finals and win the trophy again in 1990. In fact, between 1988-90, his rivalry with Boris Becker became the main feature of the tournament.

Between 1987 when he made the semis for the first time and 1993 when he entered the last four for the final time, Edberg's record at Wimbledon made for an impeccable reading: 39-5.

However, in his final three appearances the Swede's record made miserable reading: 3-3.

And that probably hastened his retirement.

Many might argue that Edberg never dominated at the Big W.

And they won't be entirely wrong.

However, considering the fact that there was far more competition in those days, and Edberg's results being more consistent than most, he definitely makes the list.

Agassi and Wimbledon made an odd couple Andre Agassi and Wimbledon made an odd couple.

The American's baseline game was hardly anywhere close to the kind required to succeed at the All England Club.

It was therefore surprising that Agassi's first major title following three final defeats - came where it was least expected to.

However, the American survived 37 aces from Goran Ivanisevic's racket to register a memorable triumph.

However, the tournament did mark the rise and fall in his career in more ways than one, with his third round defeat in 2003 hastening his departure from the game. The American's match record at the Big W was one win against three defeats after his first three appearances.

A semi-final loss to Goran Ivanisevic in 1992 was an indicator of the change that was about to happen.

And between 1993 and 2000, Pete Sampras won a whopping seven titles at the All England Club -- a most titles record he shares with William Renshaw.

The lone loss in that phase came in 1996 when an inspired Richard Krajicek took him out in the quarter-finals and went on to win the event.

And a year later another Swiss, George Bastl, got the better of him in the second round.

It took Sampras less than two months to announce his retirement.