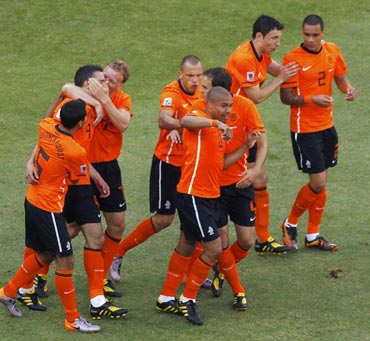 Ghana's "Black Stars" hope to go where no African team has been before and reach the World Cup semi-finals on Friday, while Brazil face Netherlands in the day's first and equally intriguing quarter-final.

After a two-day lull, the action restarts at Nelson Mandela Bay Stadium in Port Elizabeth where five-times champions Brazil take on a Netherlands who have failed to lift the trophy despite fielding some of the most eye-catching teams ever.

Their four-out-of-four wins in South Africa so far have been solid rather than spectacular. Yet with attacking talent like Arjen Robben, Wesley Sneijder, Robin van Persie and Rafael van der Vaart lurking, the Dutch could come alight any time.

"We play our better games against teams that want to play football as well and on Friday, Brazil is not going to wait," winger Ryan Babel said.

Brazil have become masters in defence 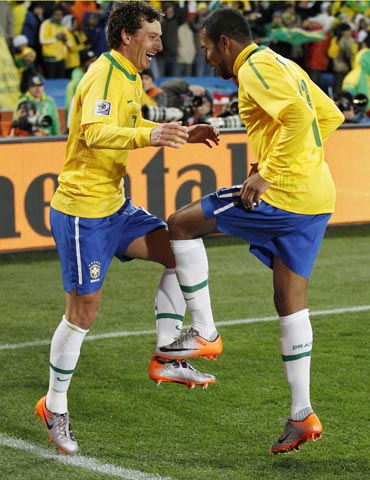 For all their own attacking power, Brazil have also become masters in defence under coach Dunga.

Despite criticism at home for abandoning some flair, Dunga appears to have found a winning formula of impregnable, European-style defence combined with the lightning-fast counter-attack capacity of Robinho, Kaka and Luis Fabiano.

The notoriously grumpy Dunga, who captained Brazil to wins over Netherlands in the 1994 and 1998 World Cups, seemed more worried about accommodation arrangements and a new training venue than his in-form opponents on the eve.

"It interferes with things. We will have to share a hotel with more people, there will be more confusion, and we will have to overcome this situation," he said. 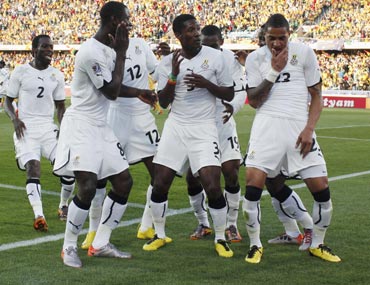 Ghana have already equalled the best African showing at a World Cup by reaching the quarter-finals.

To chart new territory and cheer millions around Africa, Ghana need to beat a mean-looking Uruguay side, who are one of an unprecedented four South American teams in the quarters.

"It is a match of destiny which places an onerous responsbility on the Black Stars," Ghana's former president John Kufuor said.

Uruguay would fancy their chances 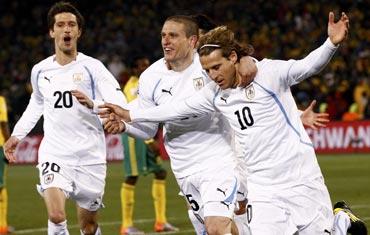 Uruguay also have history calling on them.

"La Celeste" won the World Cup back in 1930 and 1950 and would love to recapture those early glory days. Strike pair Diego Forlan and Luis Suarez's five goals between them so far would suggest the South Americans may have the upper hand.

While most Africans will obviously be cheering for Ghana, there is a little corner of South Africa that will forever be Uruguayan: Kimberley, where the squad has been staying.

Staff and guards bade them farewell with an old South African rail-gang song "Shosholoza", meaning "Go Forward", when the Uruguayans left their hotel in the mining city en route to the showdown with Ghana in Johannesburg.

"The country is supporting Ghana, because they are African, but in this city, everyone is for Uruguay," said hair salon owner Philinda Golden, who had the honour of trimming Forlan's blond locks during his stay.

The other two quarter-finals, on Saturday, pit Argentina against Germany and Paraguay versus Spain.

Fans happy to be in South Africa 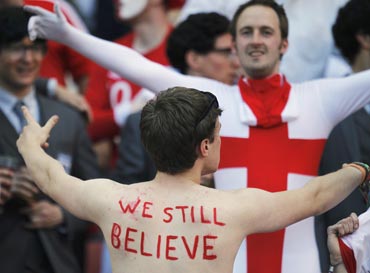 Image: English fans during a match

For fans of the 24 teams knocked out of the tournament, it is not all doom and gloom.

Plenty have stayed on in South Africa for a spot of tourism and, instead of looking to Cristiano Ronaldo or Wayne Rooney for their thrills, are cuddling baby lions or swimming with sharks among the many other possibilities for tourists here.

"You always hear about how dangerous this country is, but I've had no problems at all," said England fan Tom Flynn, 19, before bungy-jumping from the world's tallest bridge outside Plettenberg Bay, dressed in England wig and flowery dress.

That sort of attitude will delight South African authorities, who spent more than $5 billion on the event, hoping it would boost tourism and help soften perceptions of high crime plus negative past associations with apartheid.