Images: Dirt bikers rev it up in Jaipur 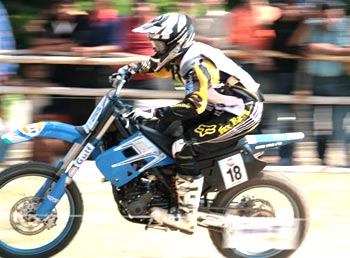 Pramod Joshua was the star performer in the first round of the Gulf Cup Dirt Track racing in Jaipur on Sunday. The 28-year-old TVS Racing rider from Bangalore won the four glamour events of a long programme to steal the honours in the event, sponsored by Gulf Oil Corporation and organized by Sportscraft Mumbai in association with Action Sports, Jaipur.

Motorsport fans who turned up at the JDA grounds, Vidhyadhar Nagar, were simply awe-struck as they watched some of the country's leading riders go through the motions in high speed dirt track racing.

He was always under pressure as he went around the specially-laid out serpentine course, but to his credit he did well to overcome a strong challenge from his TVS team and city mates K P Arvind and H K Pradeep. 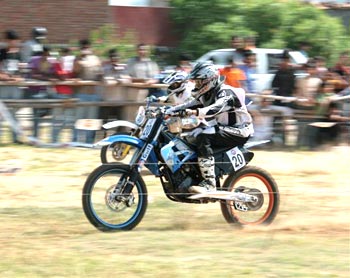 Dirt track racing is all about riding at high speed on a specially-laid out winding track, which is mostly slushy and gravel-laden. The rider has to negotiate serpentine bends while doing several laps and is timed to the hundredth of a second.

The sandy surface made riding extremely dicey. The seasoned riders too had a tough time staying astride on their bikes, and it required a good degree of skill and stamina to come good.

It was heartening to watch some novice riders, like R Murthy, who came up with a fine display. Riding a TVS Apache, the Bangalore rider won two of the three novice classes for 130 cc bikes and showed promise of developing into a champion rider.

The competition opened with the Indian Expert Class for modified foreign motorcycles up to 260cc. After running closely, Joshua took the lead and held on to win the class. He finished ahead of Arvind K P, astride a TVA RTR 250 FX, and Nashik's Shamin Khan, astride a Honda CFR 250R, who placed second and third respectively. 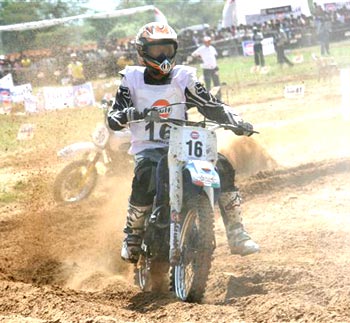 After the first race, many felt Arvind and Pradeep would give Joshua a tough time in the races that followed. However, it was not to be as Joshua proved too good. H K Pradeep too turned in an impressive show, but hard as he tried had to settle for second best, behind Joshua in three events.

Mention must be made about Shamin Khan, essentially a scooter rider. Despite being a non-sponsored entry, he did well to push both Joshua and K P Arvind in the opening race of the day. Astride a Kinetic Marvel, he even went on to win the Open event for scooters. 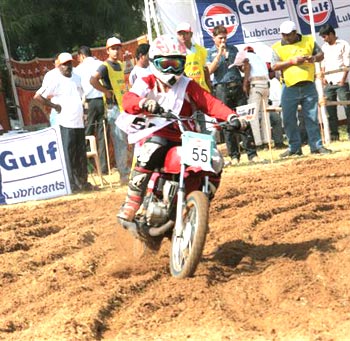 Despite the long programme of 15 races, the event went off with precision timing and it was not surprising that it was applauded not only by the participants, but also spectators.

"I really enjoyed the event. There was some good riding. Nice to see the first time riders and their bikes racing on a track," said a spectator. He was also surprised how the event was run so smoothly. True, there were 15 races and all started on time.

In sum, it was a perfect outing for both participants and spectators. Sportscraft's meticulousness ensured there was nothing to complain about.