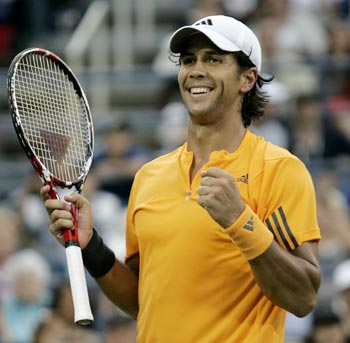 The threadbare state of American men's tennis surfaced again on Monday when John Isner lost to Fernando Verdasco in the fourth round of the US Open to make it the worst home showing in the professional era.

The towering Isner, who knocked out American number one Andy Roddick in a five-set epic on Saturday, started well but succumbed 4-6, 6-4, 6-4, 6-4 to the 10th seeded Spaniard who had too much baseline firepower for the world number 55.

Isner, 24, fired down 13 aces against Verdasco but his hopes of joining fellow Georgian Melanie Oudin, the new darling of American women's tennis, in the quarter-finals fizzled out.

Six American men reached the third round for the first time since 2003 but the fact that none of them proved capable of going deep into the second week left a dark cloud hanging over Flushing Meadows despite the exploits of 17-year-old Oudin.

"I got outplayed today," admitted Isner, whose victory over Roddick was his first against a top-five player, told reporters.

While Roddick, as he proved by pushing Roger Federer to the limit in the Wimbledon final proved, is still a class act, there appear to be few backing him up on a consistent basis.

Sam Querrey, the second-highest ranked American man at 22, lost to Swede Robin Soderling in the third round while James Blake, for so long Roddick's main ally in grand slam play, was outplayed by Spaniard Tommy Robredo. 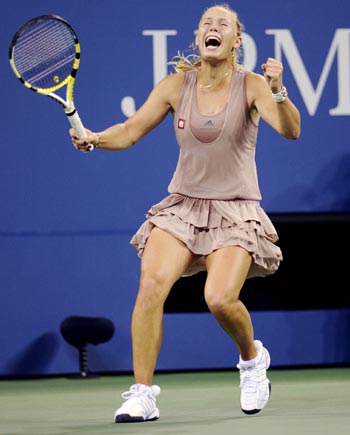 She may float like a ballerina but Caroline Wozniacki proved she packs a punch as she reached her first grand slam quarter-final on Monday.

As the face of the Stella McCartney range of tennis clothing, the ninth seed has always looked the part but on Monday she achieved arguably the biggest win of her career.

"I feel a bit like a ballerina," Wozniacki said of her outfit after her two hour, 23-minute triumph which set up a clash with 17-year-old American Melanie Oudin.

Her genes clearly help her but Wozniacki puts much of her physical prowess down to the extra work she has done in the gym, especially her boxing fitness work.

"I feel in great shape," she said.

"I feel like I could run forever. It's hard work but it's paid off and I love it."

Kuznetsova says she lost to herself 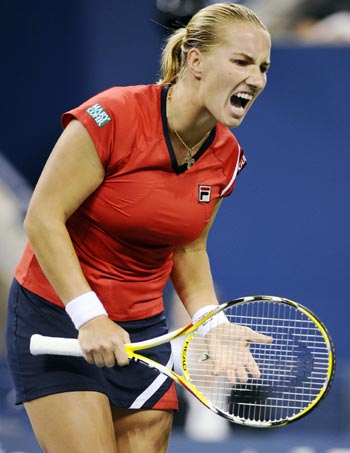 The scoreboard may have said Caroline Wozniacki beat Svetlana Kuznetsova at the US Open on Monday but the Russian had a different take on their fourth-round encounter, saying she "lost to myself."

Never one to shirk responsibility, the 2004 champion said her 63 unforced errors handed Wozniacki a victory.

The French Open champion stormed through the first set thanks to her greater aggression but Wozniacki gradually wore her down and forced the mistakes, finally snatching victory by taking the final-set tiebreak 7-3.

"She was putting balls back but I lost to myself because I did so many unforced errors," Kuznetsova said after her defeat ended Russian presence in either singles event, their worst grand-slam showing since Wimbledon in 2000.

"These unforced errors, you cannot win against nobody. It's no chance."

Ninth-seeded Wozniacki worked her way into the match thanks to some athletic retrieving and tempted Kuznetsova into a series of mistakes.

"I think in the second set I should have played better," Kuznetsova said.

"I was playing unbelievable. I just hit too many unforced errors and I could not control my emotions. I wanted it so much, so it was pretty hard to control.

"Some points I was too tense. I was just pushing the ball in. But it's not my game and I know this. I was going for it. I just didn't do it so well."

With a little help from McEnroe, Djokovic charms New York 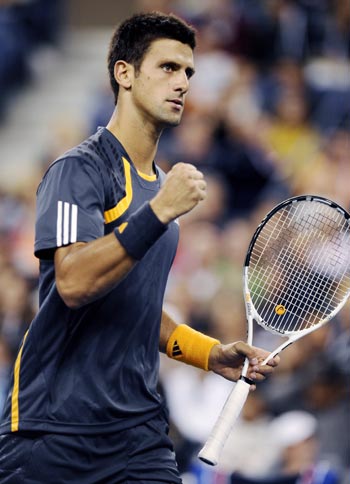 Fourth seed Novak Djokovic moved up a gear at the US Open on Monday as he routed Czech 15th seed Radek Stepanek 6-1, 6-3, 6-3 to reach the quarter-finals.

The Serb, runner-up at Flushing Meadows in 2007, was never tested as he raced to victory in one hour, 46 minutes to set up a clash with 10th seed Fernando Verdasco of Spain.

Stepanek was woeful in the first set and Djokovic took it in just 23 minutes before easing through the second.

The Czech put up more of a fight in the third set but a brilliant lob gave Djokovic the break in the sixth game and he marched into the last eight for the third straight year.

After the match, Djokovic thrilled the late-night crowd with a hit against former champion-turned commentator John McEnroe.

Twelve months ago, the Serb incurred the wrath of the New Yorkers by beating Andy Roddick and then irked the fans in a prickly courtside interview, prompting loud jeers.

"First of all I would like to thank all the crowd for staying late," Djokovic told the fans.

"New York is a big place and there have been many big matches here at night. It's a privilege for me to play at night. I hope I have more chances to do it."

But as McEnroe made his way down from the commentary box, he gave an encore, sending down a serve in the American's familiar style before yelling "You cannot be serious" when his shot missed the line.

When McEnroe arrived, in trousers and a full-sleeved white shirt, the two played a few points and Djokovic bowed in reverence as the 50-year-old McEnroe hit a winning volley.

"It actually was quite funny and the crowd loved it. And Johnny, of course, made a small favour coming down," said the Serb. "It wasn't easy playing in jeans and suit and collared shirt but it was a lot of fun.

"I like to entertain the crowd. That makes me happy as well. Playing with Johnny Mac and having fun, I think that's what the crowd want, and especially in this hour, these night matches make this tournament very special." 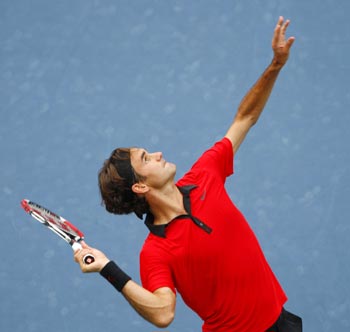 The Swiss world number one took a while to warm up as clouds gathered over Arthur Ashe Stadium but once he had the first set in the bag, Federer wasted little time putting Robredo into the shade and secured his ninth straight win over the Spaniard.

Federer, winner of a record 15 grand slam titles, sealed victory with his ninth ace in one hour 48 minutes.

Federer next plays Sweden's Robin Soderling, whom the Swiss beat en route to the French Open and Wimbledon titles this year.

It took a baby wailing in the stands to remind Roger Federer that his life no longer simply revolved around tennis.

At 5-5 in the first set, the Swiss world number one looked like he could be heading for an unusually long workout against a player he has beaten eight times in a row since 2002.

But just when Tommy Robredo started to daydream that this might be the day he would finally pull off the impossible, the howls from high up in the aisles on Arthur Ashe Stadium rudely interrupted his reverie.

While 20 years ago John McEnroe might have held up proceedings to demand stewards evict the offending infant from the arena, Federer reacted by playing like a man who was running horrendously late for his children's birthday party.

Day job done, it was time to get back to his real duties -- as a hands-on dad to his 46-day old twin daughters Charlene and Myla.

Is the world's greatest ever racket swinger any good in the nappy changing department?

"Thank God nobody is judging me on it but I'm trying hard. I'm trying to be good at it. I guess women are always going to be better at that stuff."

'She's just having a blast out there' 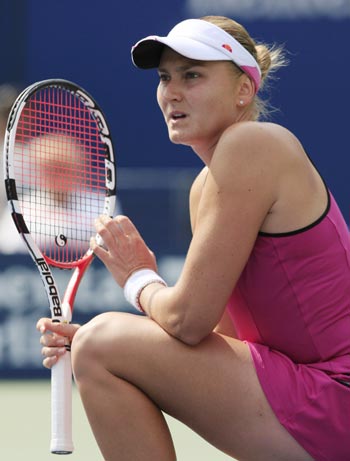 Another day, another Russian on the scrapheap.

Life at this year's US Open is becoming joyfully predictable for new American sweetheart Melanie Oudin.

Initially it appeared as though her wins over Anastasia Pavlyuchenkova, fourth seed Elena Dementieva and former champion Maria Sharapova had taken their toll on the young American tyro as she looked overawed in a first set lasting half an hour.

She was also 4-3, 40-15 down in the second set before a wasteful forehand from her opponent and a scorching winner sparked a thrilling counter-attack that had Petrova reeling and the New Yorkers whooping it up in the aisles.

When she sealed victory with another thumping forehand on her third match point the roars drowned out the jet soaring into the air from nearby La Guardia and probably reached as far as Manhattan's Times Square.

"She was all over me at the start and I didn't know what to do," a breathless Oudin, who has bettered her last 16 run at Wimbledon this year, said on court after dropping her racket in disbelief and clenching her fists to all sides of the stadium.

"I didn't think I started off too well and Nadia served unbelievable, but I stayed in there with her in the second set and she gave me a few free points and I got my confidence and I believed I could do it and I did it.

Oudin's brimming self-belief appeared to overwhelm Petrova in the final set as she lost nine out of 10 points as her young opponent sped into a 5-2 lead.

Petrova, who made her professional debut when Oudin was banging balls against the garage door as a seven-year-old, said the exuberance of youth was working in Oudin's favour.

When you do it for the first time you feel so excited and everything is so new and you have absolutely nothing to lose," the 27-year-old told reporters.

"She's on a roll, she goes, she enjoys it, the crowd is behind her. She's just having a blast out there."

'I thought that he was moving pretty well' 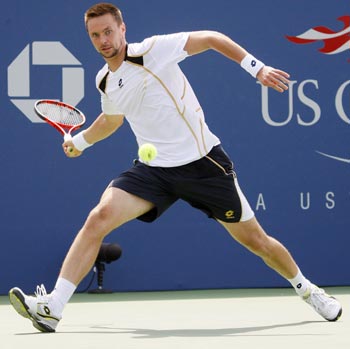 Eighth seed Nikolay Davydenko hobbled out of the US Open on Monday after a thigh strain forced him to retire midway through his fourth round match against Roland Garros runner-up Robin Soderling.

The Swede became the first man to reach the quarter-finals when Davydenko shook his head and informed the umpire he could not continue at the end of the third set.

The retirement would also have been a relief for Soderling, who had suffered a dizzy spell during the 7-5, 3-6, 6-2 win.

Asked to describe his injury, Davydenko said: "Just some muscle problem, like groin muscle maybe. We don't know yet.

"In the middle of second set I felt something painful in the muscle, and every point I have more and more pain.

"I called physio as I was thinking, 'What is wrong?' I really don't know if it was a big injury or small injury. And physios also cannot tell me anything. I need some MRI to check my muscle."

The Swedish 12th seed said he had no idea Davydenko was in so much pain.

"I thought that he was moving pretty well. He's a very fast guy, so I was a little bit shocked that he retired," he said.

Davydenko's demise continued a miserable run for the Russians at this year's Open. Having started with 15 women and eight men in the singles draws, no one has survived.

Soderling's victory also set the stage for a rematch with Roger Federer, the only man to have beaten the Swede in the last two grand slam events.