Indian boxers ready to pack a punch at World championship 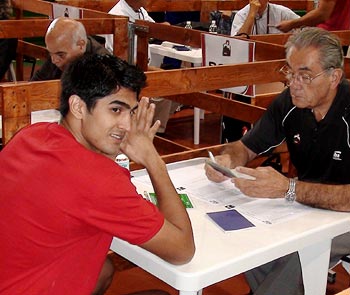 Vijender Singh continues to scale new heights. The Beijing Olympics bronze medallist was given top billing in the middleweight category while three Indians were also seeded for the World Boxing Championships, starting in Milan on Tuesday.

The 23-year-old Vijender, who was conferred the Khel Ratna last week, got a bye in the first round but has a tough bout in the second against a Kazakh boxer.

"Vijender was named top seed at the draw ceremony. It is amazing that Cuban boxer Emilio Correa to whom Vijender lost in the Olympic semi-finals has been seeded fifth," Indian boxing coach Gurbax Singh Sandhu said from Milan. 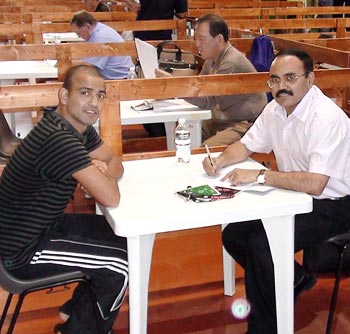 Among other Indians, Beijing Olympics quarter-finalist Akhil Kumar, who makes his featherweight debut in Milan, has been seeded seventh and will face Navarro Gonzalez Roberto from the Dominican Republic.

The Championships have attracted a record 553 boxers, representing 144 countries, in 11 weight categories.

In addition to AIBA president Dr Ching Kuo Wu and other senior office-bearers of the International Boxing association, there were eight International Olympic Committee members who had come to witness the draw of bouts and seeding system, which was introduced in the World Championships for the first time.

In each weight category eight boxers have been seeded and the draw for them was manual to allot their positions in the draw table.

Subsequently for the rest of the boxers the draw was done with the help of a computer.

Jitender faces Anvar in his first round bout 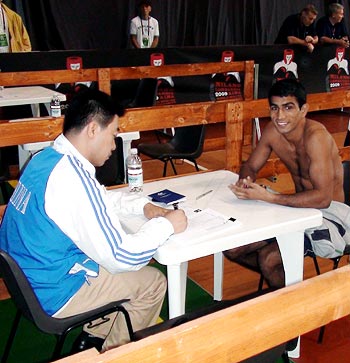 A look at the Indian boxers' fixtures in the opening rounds:

In the 48 kgs category, World Youth champion and Asian silver medalist Thokchom Nanao Singh has been seeded number two and is slated to meet Mamishzade Elvin of Azerbaijan in his first bout.

In the 51 kgs, Mayengbam Suranjoy Singh who is the current Asian Champion in this weight category meets Myambayar Tugstsogt of Mongolia in his first round on Tuesday.

In the 54 kgs, Olympic quarter-finalist and World Cup bronze medalist Jitender Kumar will meet Yunusov Anvar of Tajkistan, who is seeded seventh. Jitender has beaten him on a couple of ocassions earlier and also lost to him too once on equal points.

Dinesh faces Vladimir in Round 2 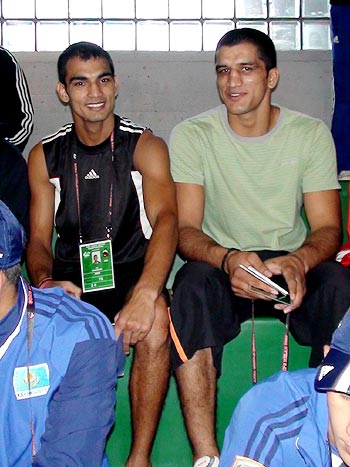 Image: Dinesh Kumar (left) and Jai Bhagwan await their turn for weigh in

In the 60 kgs, Jai Bhagwan meets Rodriguez Angel of Venezuela in his first bout.

In the 64 kgs, Manoj Kumar is slated to face Carvaho Myke of Brazil.

In the 75 kgs, Vijender Singh, who is seeded number one will face Belgibayev Azamat of Kazakhstan in the second round after getting a bye in the first.

In the 81 kgs, fourth seeded Dinesh Kumar will face Reznicek Vladimir of the Czech Republic in the second round after he also received a bye in the first round.

In the 91 kgs, Manpreet Singh will come up against Usyk Olexandr of Ukraine in the second round after a bye in the first round.