A year after Vijender's Olympic bronze 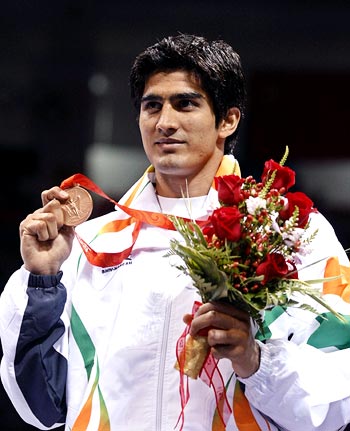 Image: Vijender Kumar shows off the bronze medal during the medal ceremony at the Beijing 2008 Olympic Games
Photographs: Reuters

It's not everyday that an athlete emerges champion even in defeat.

On August 22, 2008, Vijender Singh did just that when he lost his semi-final bout at the Beijing Olympics. But the bronze medal he settled for was the first any Indian boxer won at the world's biggest sporting event.

He completes a "life-changing" year since that feat on Saturday, but Vijender says it is just like yesterday for him.

"It's amazing, a year has passed since I won the Olympic medal and what a year it has been! I still remember the days in Beijing very clearly, it's just like yesterday.

"Winning the Olympic bronze medal was the start of a new life for me.

Everything changed after that medal," the 23-year-old middleweight (75kg) boxer said.

"I lost the (semi-final) bout. It would have been nice to have won and ensured that India's first Olympic medal in boxing was gold," the Khel Ratna awardee added.

"But I am proud of what I achieved and the fact that it made such a difference to Indian boxing gives me immense happiness."

How Vijender overcame the odds 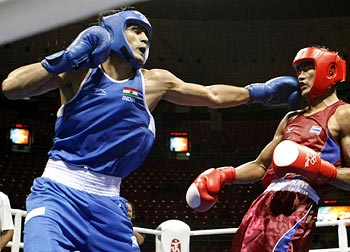 Image: Vijender Kumar (left) during his bout against Angkhan Chomphuphuang of Thailand at the 2008 Beijing Olympic Games

The road to the Olympics was a bumpy one for Vijender as he had failed to qualify for the event in his first two attempts and was battling a nagging back problem going into the third and final qualifying tournament.

Vijender's last shot at Olympic qualification was at the second Asian Qualifiers in Kazakhstan. Perhaps marking the start of the good times that followed, Vijender didn't just qualify, he won a gold medal.

A couple of months before leaving for Beijing, he pulled off one of the biggest wins of his career by beating Athens Olympics gold medalist Bakhteyar Artayev in the President's Cup to clinch India's maiden medal -- a bronze -- in the tournament.

Even Holyfield impressed by Vijender 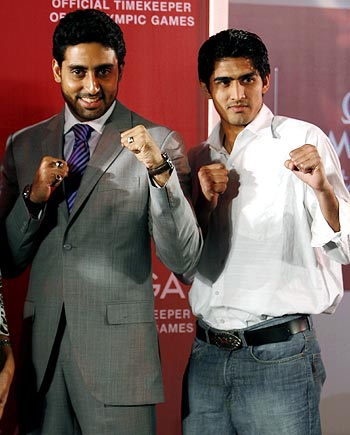 Before heading to Beijing, Vijender said he was confident but did not want to make any tall claims.

"I wanted to prove it in the ring. I am happy that not just me but all the five boxers who went to Beijing made their mark. Beijing gave me memories that I will cherish my whole life," he said.

Once there, Vijender created such a buzz that even former world heavyweight champion Evander Holyfield sat through his bouts and came looking for him after his semi-final loss.

"That's what you live for as a sportsperson... to get acclaimed by such greats," he said.

'There is no shame in losing' 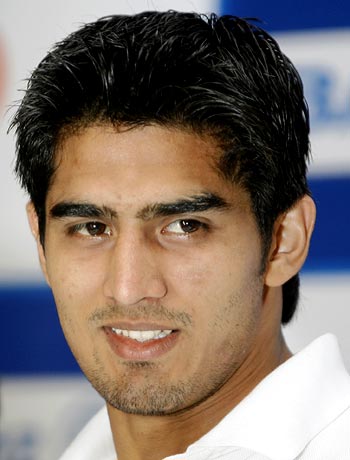 The day before the semi-finals, he picked a calf muscle injury and the after-effects of a grueling first-round bout, in which he hurt his knee and collar bone, were still showing.

"Yes, there were injuries but I have never cited them as an excuse for my loss. I am happy with the performance I put in and let's give credit to the guy who won," Vijender said.

The strapping six-footer lost to Cuba's Emilio Correa Bayeux, who is now the world number one.

"There is no shame in losing if you know that you have given your best and I know I gave my 100 per cent. So, having gotten over the initial hurt, the defeat doesn't rankle me anymore," he said.

'Hard work got me the results' 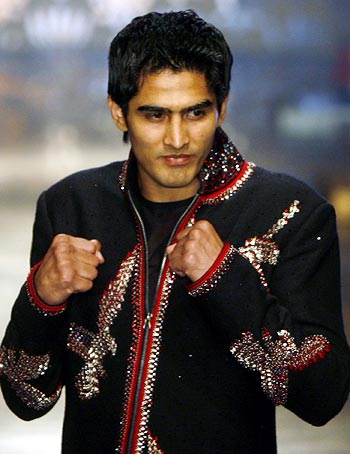 His life changed drastically after that and it's a change that has left him with mixed feelings.

"Felicitation after felicitation, getting recognized while walking on the streets was a whole new experience for me. It was hectic and tiring but who cares, I worked hard for it. So I am not going to complain," Vijender said.

"I feel blessed and also consider myself lucky that my hard work got me the results that I always wanted," he added.

More
© Copyright 2022 PTI. All rights reserved. Republication or redistribution of PTI content, including by framing or similar means, is expressly prohibited without the prior written consent.
Write a
Comment
Print this
article