International Olympic Committee (IOC) President Jacques Rogge will provide a much-needed lift for the troubled Commonwealth Games when he visits the site of the multi-sports gathering on Friday.

The 68-year-old Belgian will be accompanied by wife Anne, Chief of Staff Christophe de Kepper and around 20 other leading IOC officials, deputy chairman of the Games Organising Committee Randhir Singh said on Thursday. 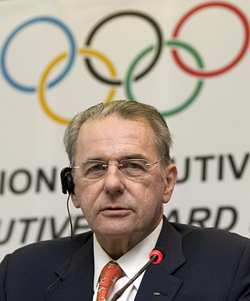 "Jacques Rogge has been a great supporter of not only the Delhi Games but also the Indian Olympic Association," IOC member Singh said.

The IOC chief would remain in Delhi for Sunday's opening ceremony before leaving the next day, Singh added.

Rogge remains hopeful that the Games will be a success despite a messy leadup to the event, plagued by security issues and concerns over hygiene, corruption and overall mismanagement.

© Copyright 2020 Reuters Limited. All rights reserved. Republication or redistribution of Reuters content, including by framing or similar means, is expressly prohibited without the prior written consent of Reuters. Reuters shall not be liable for any errors or delays in the content, or for any actions taken in reliance thereon.
Related News: IOC, Jacques Rogge, Randhir Singh, CWG, Christophe de Kepper
SHARE THIS STORYCOMMENT
Print this article

'Athletes may catch dengue during CWG'