Revealed! The security plan for the Delhi Games

The Indian government has drawn up an elaborate security plan at the cost of hundreds of crores to thwart any terrorist strike during next month's Commonwealth Games, by installing systems to detect chemical, biological weapons and "nuclear signature", according to a book on the security aspect of the Games.

The book Road to Commonwealth Games 2010', written by Sunil Yash Kalra, to be released on Tuesday, said the government has procured high technology state-of-the-art equipment to ensure that there is no terror strike.

"As protective measures against a terror strike involving chemical and biological weapons, the security arrangements at the Games venues will include high-tech detection and countering systems to identify the chemical and biological weapons, along with Gamma sensors to pick up any nuclear signature," the book which provides a comparative analysis of the security arrangements of 2006 Melbourne Commonwealth Games, 2008 Beijing Olympics and Delhi Games.

"The Games security arrangement will be a costly affair with the equipment alone costing Rs 300 crore. Apart from CCTV cameras, metal detectors, smart cards and X-ray baggage machines, some of the high-class gadgets that will be used to ensure foolproof security are Bar Code Readers; 'Bomb-proof' Dustbins; Tyre-killers; Intrusion Detection System; CRP Camera; OB Vans; C4i; and Under Vehicle CCTV Surveillance," it said. 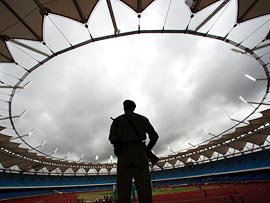 "In December 2009, the Home Ministry had approved the installation of an integrated security system for all the competition, training and non-competition venues, to be executed at a cost of Rs 370 crore," the book said.

It said at least one dedicated medical facility will be set up at each venue to treat victims in case of an emergency.

Moreover, expert response teams on chemical, biological, radiological, nuclear and improvised explosive devices, will be deployed at all venues.

The book said the security outlay for the Games will comprise a four-layer plan coupled with an extensive aerial survey. Each venue will have an 'outer', 'middle', 'inner' and 'exclusive' level of security.

Various civic, medical, security and intelligence agencies will coordinate with each other to implement the plan that covers competition and training venues, the Games Village, hotels and parking sites. And all these agencies are to work under the 'Command, Control, Communication, Coordination and Integration Centre' that has been set up at the Delhi police headquarters.

"The outer cordon will comprise park and ride facility monitoring, access control measures like ticket checks, and surveillance through close-circuit television cameras. In the middle cordon, the spectators and visitors will be channelised to their designated seats at the venues," the book said.

It said electronic surveillance apart, snipers will be deployed on the building roofs and emulating the security model used in the 2002 Manchester Commonwealth Games, there would be construction of a 2.8-metre high boundary wall around the venues.

The book also said that there would be elaborate arrangements to check entry of spectators in the venues.

"At the inner layer, tickets will be rechecked through barcode screening and verification of the photographs of the spectators. The vehicles of VIPs, visiting dignitaries and the participants will be checked via the pre-allotted radio frequency identification mechanism, and with the help of scanners. To prevent forcible entry, boom barriers followed by tyre-killers and road-blockers will be in place," it said.

"The entry to the exclusive zone, which is the 30-metre radius of any competition venue, will be allowed only after screening through doorframe and hand-held metal detectors, and X-ray baggage scanners, apart from manual frisking. A total of 239 X-ray baggage inspection machines will be installed across the training venues, with each venue equipped with more than 300 CCTV cameras."

Despite scams, Centre to give more funds for CWG

No need to deploy Army in Naxal areas: Centre