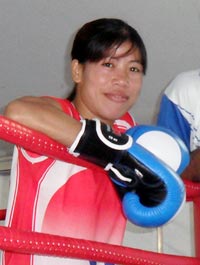 Mary Kom, who competed in the 48kg category, had defeated Alice Kate Aparri of the Philippines 8-1 in the semi-finals to assure herself of at least a silver in the sixth edition of the competition.

The former Khel Ratna awardee from Manipur thus remains the only boxer who has won a medal in each edition of World Championship.

Duta had defeated Kazakhstan's Nazgul Boranbayeva 10-5 in the semi-final.