New US Open tennis champion Rafa Nadal was given a standing ovation by Real Madrid fans when he strolled out on to the Bernabeu pitch before their Champions League match against Ajax Amsterdam on Wednesday.

The Spanish world number one, a shareholder in Real Mallorca in his native Balearic Islands and a passionate Real Madrid fan, paused in the centre circle to watch footage of him lifting the trophy in New York on Monday on a big screen. 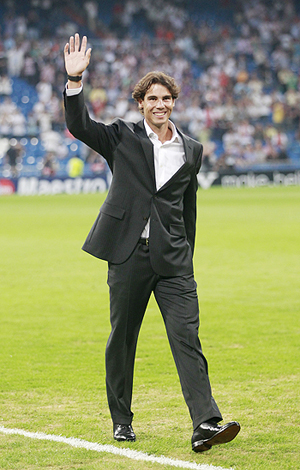 Wearing a dark suit and white shirt, he posed for photos before heading up to his seat to watch the Group G match.

The 24-year-old arrived in the Spanish capital on Wednesday morning after becoming only the seventh man to win all four grand slams and following a whirlwind round of public events and television appearances.

© Copyright 2020 Reuters Limited. All rights reserved. Republication or redistribution of Reuters content, including by framing or similar means, is expressly prohibited without the prior written consent of Reuters. Reuters shall not be liable for any errors or delays in the content, or for any actions taken in reliance thereon.
Related News: Real Madrid, Rafa Nadal, Real Mallorca, Ajax Amsterdam, New York
SHARE THIS STORYCOMMENT
Print this article