'If Bopanna-Qureshi can play, why can't India-Pak?'

"I have one question for everyone. If Bopanna and Qureshi can play together, why cannot India and Pakistan?" he asked, after congratulating the duo on making it to the final of the season's last Grand Slam in New York.

Bopanna and Qureshi beat Argentines Eduardo Schwank and Horacio Zeballos 7-6 (5), 6-4 in the semi-finals on Wednesday night to set up a clash with top seeded American brothers Bob and Mike Bryan. 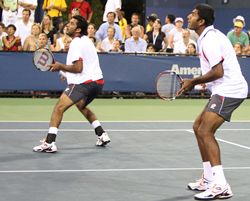 "I have been following the Bopanna-Qureshi combination in tennis doubles. They combine very well, have total understanding and are top doubles players in the world. Now they are in US Open final and I pray for their win," he said in a congratulatory message.

"I am confident that would achieve the sub-continent dream finally," he added.

How Chanu bounced back in Tokyo after Rio failure