Houghton is not racist: Bhutia

India football captain Bhaichung Bhutia threw his weight behind national coach Bob Houghton, saying the Briton did not make any racist comment against referee Dinesh Nair and his allegation was "false".

"He (Nair) crossed the line by making false allegations against Bob," said Bhutia after launching of Bhaichung Bhutia Football School in New Delhi.

The referee had accused Houghton of making racist remarks against him during India's friendly against Yemen earlier this month in Pune. The matter has now been referred to All India Football Federation's (AIFF) executive committee.

"Bob can't say such things against anyone. I was there during the match. Bob might have said something and Dinesh interpreted it in a wrong way. I think Dinesh had crossed the line and took it too far," said Bhutia. 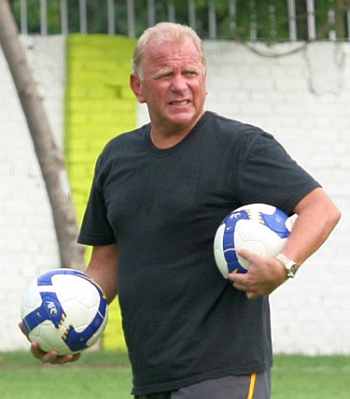 "I am playing under him (Houghton) for the past three years and can assure that Bob is not racist. Ask any of the 30 players in the national camp and they will also say this," the India skipper added.

"Everybody swears on the ground and that includes referees. These are a part and parcel of the game and it should be left at the ground only. As far as I know Nair, his comments should not be given much importance," Bhutia said.

Nair is the only Indian referee to be chosen for the November 12-27 Guangzhou Asian Games.

Going back to the last Federation Cup final, Bhutia said, "Nair made some howlers in the match. He disallowed two clear goals of Mohun Bagan that helped East Bengal win the match. It was a case of shocking supervision."

These are crucial times for the Indian football team, with the Asian Cup in Doha scheduled to be held in January, and in case Houghton is found guilty and suspended for five games at this juncture, Bhutia said, "It will be a disaster".

"He has been preparing us for the Asian Cup for the past three years and now if he is suspended, the morale of the team will take a beating. I appeal to the federation to take a decision only after the Asian Cup," he said.