Maria Sharapova was recently spotted with her new engagement ring, which was given to her by her fiancee L.A. Laker Sasha Vujacic.

"This ring makes a statement. It's no wonder why Maria is smiling in the photos! " UsMagazine.com quoted jewelry expert Michael O'Connor as saying.

O'Connor gave more details on the Grand Slam winner's bling: the center stone appears to be a cushion-cut diamond of approximately 7 to 8 carats on a thick, split-shank platinum band. 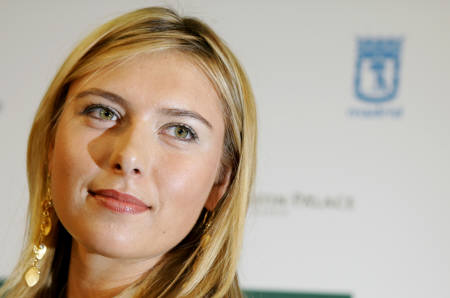 After nearly a year of dating -they first stepped out together at a November 2009 U2 concert -- Vujacic proposed to Sharapova in his Manhattan Beach, California home.

No wedding date has been announced.

Meanwhile, the former world number one will fine tune her Australian Open preparations with her first appearance at the Auckland Classic, organisers said on Wednesday.

The world number 17, who won two tournaments and made three other finals in 2010, joins champion Yanina Wickmayer of Belgium as confirmed entrants for the Jan. 3-8 event, which serves as a warm-up to the Australian Open from Jan. 17-30.

The 23-year-old, who won Wimbledon in 2004, the U.S. Open in 2006 and the Australian Open in 2008, has been hampered by injury over the past two seasons but organisers expected her to be a huge drawcard for the tournament in central Auckland.

"Having Maria come to the ... Classic is a major boost to the tournament and to the sport," said tournament director Richard Palmer.

"Her popularity is huge and she will be one of the leading players at the (tournament) in 2011."