India's dream of registering a maiden hockey gold in the Commonwealth Games came down crashing as World champions Australia spanked them 8-0 in the final, to win their fourth consecutive gold in the quadrennial event.

The sweltering conditions had no effect on Australia's performance as they proved too strong for the eight-time Olympic champions, completely outplaying the hosts with their power hockey in front a packed house at the Major Dhyan Chand National stadium on Thursday afternoon. 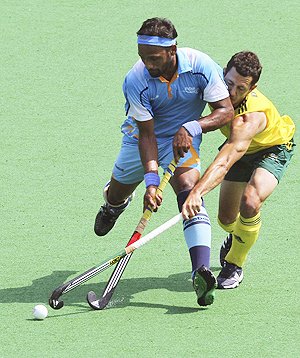 The Delhi Games gold also saw the Kookaburras perform the rare feat of becoming the only men's hockey team to win the World Cup, Champions Trophy and Commonwealth Games in a same year.

Incidentally, it is India's worst-ever defeat at the National stadium after the 1-7 drubbing at the hands of Pakistan in the 1982 Asian Games.

New Zealand won the bronze medal, as luck ran out for England again once they were forced into the tie-breaker.

The Black Sticks beat England 5-3 in the penalty shoot-out to clinch the bronze after both the teams were locked 3-3 in 70 minutes regulation time and extra-time.

In the final, Australia showed their class and taught India a hockey lesson, pumping in four goals in each half.

Contrary to the humiliating scoreline, India gave Australia a run for their money in the opening 15 minutes but faded away, failing to match the power of their opponents.

The encounter was a fast-paced affair from the onset and the Indians tried their best to slow down the proceedings after the initial burst.

Initially, India's weak link, the defence, worked hard to contain the Australian forwards but succumbed under continuous pressure and conceded as many as three goals within the span of 11 minutes.

The difference between the World champions and erstwhile hockey giants India was in goal conversion.

Australia converted all their chances into goals while the home team cut a sorry figure when it came to finishing.

India got their first scoring chance in the 14th from a penalty-corner, but Shivendra Singh failed to stop the ball.

The Kookaburras, on the other hand, made use of their first opportunity as Wilson found the back of the Indian net in the 19th minute after getting a deflection from Sandeep Singh's stick.

Two minutes later, Australia doubled their lead through Ciriello, who spanked the ball to the top of the Indian goal from their second penalty-corner.

The scoreline could have been more embarrassing for the home team, but some good fortune saved them more humiliation.

If that was not enough, Australia virtually sealed the match with a 4-0 scoreline in the first-half.

Wilson scored in the 28th, courtesy sloppy work by Indian defenders, and then Doerner made it 4-0, a minute before the breather.

Doerner fired in Australia's third penalty-corner with a low grounded flick to stun the capacity crowd, which also included Prime Minister Manmohan Singh and Congress president Sonia Gandhi, among others.

The script of the match was no different in the second-half, as the Aussies added salt to India's wounds with four more strikes to stamp their authority on the world No 1 tag.

As was the case in past matches, the Indians lacked in fitness in the second-half and were only seen running after the ball but without success.

The Aussies made merry against the sloppy Indian backline, scoring through Doerner, Orchard, Dwyer and Turner.

In between India earned their second penalty-corner, but Sandeep Singh once again flopped.